Home Sport Is this Smith’s time for major glory? 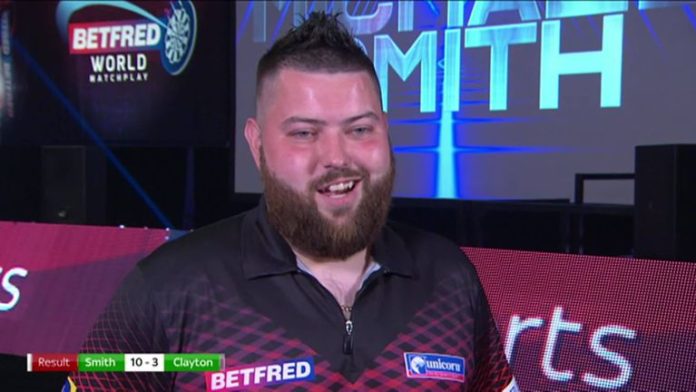 Smith: “Coming into it this year, I want to go one better. It’s about time; it’s been too long now”

After Michael Smith thrashed Jonny Clayton to reach the second round of the PDC World Matchplay, ‘Bully Boy’ said it was about time he won a major.

Last year’s runner-up produced an effortless display against Clayton, running out a 10-3 winner at the Marshall Arena in Milton Keynes on Sunday night.

The St Helens star has already reached finals at a number of major events, including the 2018 Premier League, the 2019 World Championship, and The Masters at the start of this year.

Having lost out to Rob Cross at the Winter Gardens last year, Smith is determined to go one better and finally end the hoodoo.

“Coming into it this year, I want to go one better. It’s about time; it’s been too long now.”

The 29-year-old added the atmosphere felt “weird” without any spectators in attendance, but it was something he will have to get used to for his next match against Mensur Suljovic on Tuesday night.

“I was trying to laugh and joke during every break we had, just trying to pretend somebody was in the crowd,” added Smith.

Darts returns to Sky Sports, with nine days of coverage from the World Matchplay every day until the final on Sunday, July 26. Check out daily Darts news on skysports.com/darts, our app for mobile devices and our Twitter account @skysportsdarts.