Home Sport Championship: Who’ll go up and down on chaotic final day? 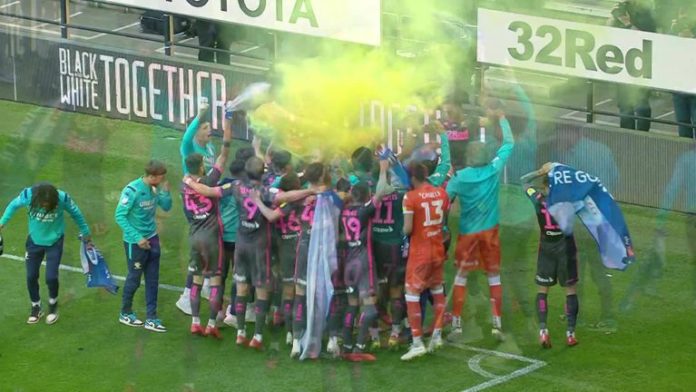 Watch West Brom vs QPR and Brentford vs Barnsley live on Sky Sports on Wednesday; who will join Leeds in the Premier League?

The Sky Bet Championship season reaches its conclusion on Wednesday evening – and there are matters to settle at both ends of the table in what promises to be a thrilling finale.

Leeds have already been crowned champions but the second automatic promotion spot is up for grabs, while the battle for the play-off places and the scrap against relegation have gone down to the wire.

From the permutations to following the drama on Sky Sports, here’s your guide to the big finale.

Marcelo Bielsa’s Leeds have already secured their place in the Premier League for next season and wrapped up the league title, but the race for second spot is far from over.

West Brom and Brentford are separated by only a point in second and third respectively, while Fulham are a further point behind in fourth.

A victory for the Baggies against QPR – live on Sky Sports Football – will settle the matter and send Slaven Bilic’s side to the top flight, but a draw or a defeat would create opportunities for the two clubs hovering below.

“We have been there since round seven of games,” said Bilic. “We have not had to rely on anyone else’s results, which is why we were so angry on Friday [after the 2-1 defeat to Huddersfeld] because, for the first time, that may not have been the case.

“The Brentford game showed the amount of pressure that comes with the position. It doesn’t come because your players are less capable of something. They were not in this position for eight games and they won all of them, the games they didn’t have to win. But the first one you have to win, they didn’t do it.

Who is David Prutton tipping for victory in the Sky Bet Championship on the final day of the season? Find out here…

“The Championship this season is longer than ever and we should be proud of what we have done so far, the whole of West Bromwich Albion, and now it’s time to finish it off. We have got to do it.”

Brentford will claim automatic promotion if they beat Barnsley – live on Sky Sports Mix – and West Brom fail to win, while a draw could be enough if the Baggies lose as the Bees have a significantly better goal difference.

Fulham could also enter the picture if they took three points against Wigan, Brentford failed to win and West Brom lost.

Race for the play-offs – can Swansea gatecrash top six?

Whoever fails to secure the only remaining automatic promotion spot will at least have the play-offs to fall back on.

But who they meet is also dependent on Wednesday’s fixtures.

Nottingham Forest and Cardiff currently occupy the last two berths in the top six and Swansea sit three points behind them in seventh.

Swansea, whose goal difference is one worse than Cardiff’s and five worse than Forest’s, need to win at Reading and hope that results elsewhere go their way. And City boss Steve Cooper appears to have taken an optimistic stance.

“It will be a team effort,” he said. “We are looking forward to it, we know we have to play well in the game and we have to win. That’s what we are determined to do.”

Survival battle – no team mathematically down

At the bottom end of the table all clubs from 19th down to 24th are in danger, with no team yet mathematically down.

Hull have the biggest task ahead of them as they sit three points behind Charlton in the last position of safety, but with a significantly worse goal difference.

The Tigers, who were on the end of that staggering 8-0 defeat by Wigan recently, need Charlton and Luton to lose – preferably by a big margin – Barnsley not to win and to record a huge victory at Cardiff themselves to stand any chance of staying up.

Gerhard Struber’s Barnsley also need to win their final game – away at Brentford, live on Sky Sports Mix – and for results elsewhere to go their way in order to stay up.

The South Yorkshire side are one point better off than Hull but know nothing but a victory will be good enough and even then, positive results for Charlton and Luton – who sit 21st and 22nd respectively on 48 points – would send Barnsley down.

The Addicks are only currently out of the drop zone because of their far superior goal difference, which is 18 better than Luton’s, but their final-day task is tough: a trip to champions Leeds. Lee Bowyer, though, is sanguine about his side’s prospects on Wednesday night.

“If we had to go to Leeds, win and rely on other results, that’s a different conversation. But if we win, we’re safe. We don’t necessarily have to win, it’s the teams below us that absolutely have to win, they are the ones chasing us.

“We have a tough game, but so do the teams around us. There will be some twists and turns on the night, that will happen, we just have to stay calm and believe that what we do on the night will keep us in the division.”

With Birmingham and Middlesbrough just two points ahead of them, wins for Charlton and Luton could be enough to stave off relegation.

Wigan in 13th may appear to be safe from the drop but they are another club who look set to need three points on Wednesday.

The administration-hit Latics are on 58 points but will have a 12-point deduction enforced after Wednesday’s game so they could yet finish in the bottom three. They will need to beat Fulham and hope other results go in their favour to guarantee safety.

Wigan have lodged an appeal against the points penalty but it is yet another sub-plot to follow closely.

“I’m a great believer in this group and sticking with it,” manager Paul Cook told Wigan Today. “How can anyone criticise anything these lads have done? They can’t.

“We were set a totally different task a fortnight ago, and these lads have responded magnificently – as has the town. There’s probably more pride in and around this football club than there has been for some time, and that’s the most important thing heading into Wednesday.

“As far as we’re concerned, we have to win our last game against Fulham. The disappointing thing is even then it might not be enough, but we’ll give it everything we’ve got.”

Fulham and Brentford both have a final-day shot at automatic promotion – and main men for each side are in the running to be crowned the Chanpionship’s top scorer, too.

Fulham’s Aleksandar Mitrovic leads the way on 26 goals – just one ahead of Brentford’s Oliie Watkins.

Will they get on the scoresheet again against Wigan and Barnsley respectively? Watkins currently has an advantage when it comes to assists – three to Mitrovic’s two – but this is another battle that will go to the final whistle.

Another Brentford player, Said Benrahma, will hope to finish in the top five but his haul of 17 goals is currently bettered by Nottingham Forest’s Lewis Grabban (20), Huddersfield’s Karlan Grant (18) and Nahki Wells of Bristol City (18).

West Brom are in pole position for automatic promotion with a one-point lead over Brentford; their game at home to QPR is live on Sky Sports Football from 7pm, with kick-off at 7.30pm.

You’ll also be able to see Fulham goals as they go in as the Cottagers head to Wigan in hope of sneaking into the top two.

Brentford need the Baggies to slip up and take advantage by bettering their result against Barnsley. You can watch that one on Sky Sports Mix from 7pm, with kick-off also at 7.30pm.

Our dedicated live blog on the Sky Sports website and app will keep you posted on all the goals from around the ground as soon as they hit the net, with match highlights from all games available shortly after full-time.

And you won’t miss a thing on a crunch night with Soccer Special, live on Sky Sports News from 7pm.

You will also be able to watch Leeds lift the Championship trophy live on Sky Sports Football from 9.30pm, and for free on the Sky Sports website and app.