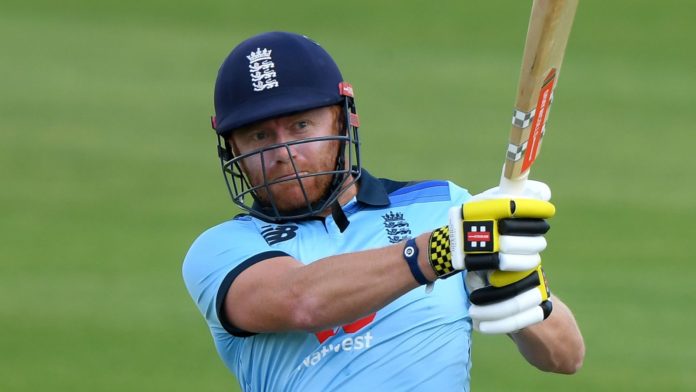 Jonny Bairstow struck a fine hundred and Moeen Ali a quickfire fifty as the latter led his team to a 100-run victory over an Eoin Morgan-captained side in their first ODI intra-squad friendly on Tuesday.

Bairstow muscled his way to 127 from 88 balls at the top of the order for Team Moeen, while the man himself – who was named Morgan’s vice-captain for the three-match series against Ireland earlier in the day – smashed 85 off just 45 deliveries, with seven boundaries and six maximums.

The duo’s efforts formed the bedrock of a sizeable score of 325-9, batting first, in the 40-overs-a-side match at The Ageas Bowl.

Of the England 24-man white-ball training group, Jason Roy, James Vince, Tom Curran and Matt Parkinson all did not feature in the game due to various knocks and niggles; Parkinson has since been ruled out of the Ireland series after spraining his ankle in a fielding session on Monday and will now leave the bio-secure bubble.

There was some flexibility shown in the contest as a result, with both Sam Hain and Liam Livingstone batting twice for Moeen’s men, while Tom Banton batted for both sides.

None of the batting hopefuls were able to capitalise, Hain managed nine off 18 deliveries and then 11 off 21, while Livingstone did at least blast 24 from 11 balls at the back end of the innings, having earlier fallen for one; Banton was dismissed for a duck when opening for Team Moeen and managed three batting at No 5 for Morgan.

Morgan’s team struggled in pursuit of such a mammoth score, despite Ben Duckett playing nicely at the top of the order with 68 off 65 balls.

Morgan too managed to get some decent time out in the middle, striking 33 off 24 before perishing as the required rate continued to climb.

The wickets were shared around among the Team Moeen quicks, with Reece Topley, Henry Brookes and Tom Helm each taking two wickets, while Moeen (3-40) spun three out, including claiming the key scalp of Duckett as Morgan’s team collapsed to 225 all out in 32.3 overs.

Earlier, leg-spinner Adil Rashid took four wickets, including that of good friend Moeen, but he proved expensive, leaking 65 runs in his seven overs.

Saqib Mahmood too struggled, conceding 76 runs and claiming just the one wicket in his eight overs, but David Willey (2-58) fared better in his first match in an England jersey since being dropped from the World Cup squad last year.

England will play a second intra-squad friendly on Friday, while England Lions will play Ireland on Sunday ahead of the first one-day international on Thursday, July 30.