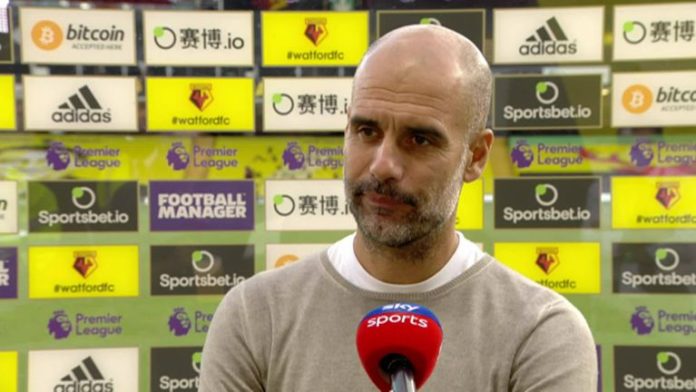 Manchester City beat Watford 4-0 on Tuesday but are 15 points behind champions Liverpool; Ben Foster calls on team-mates to look at themselves

Pep Guardiola admits he needs to work out what went wrong this season, claiming his Manchester City side have been “far away from Liverpool” in the Premier League.

Raheem Sterling moved on to 19 Premier League goals for the season – his highest tally in a domestic season – with a double as City returned to scintillating form by beating relegation-threatened Watford 4-0 at Vicarage Road.

But City boss Guardiola was in no mood to speak about individual accolades, the evening before Liverpool’s coronation at Anfield.

Following the 2-0 defeat to Arsenal in their FA Cup semi-final at the weekend, the Catalan was asked if this was the performance he was hoping for.

“It was the minimum,” he said. “It was important that we came off the pitch thinking we’d done everything to try to win the game. Of course, we are here to try to win, but we can always lose. You have to run and you have to fight. In the first half against Arsenal, that didn’t happen and that’s why we lost.

“It’s important for Raheem to score goals but we cannot forget that we finished a long way off the champions. This is not good for us.

“Of course, we’ve been much better than the other 18 teams. The distance from second to first is big and the distance between second and third is big too, but it’s not enough. The personal achievements must always be related to the achievements of the team, which has not been perfect.

“Against Southampton we created a lot of chances and we lost. The most important thing is to finish games with the sense that we’ve done everything.

“We all still need to know that we’re far away from Liverpool. This was the first time we’ve managed to win four in a row in the Premier League. Two seasons ago, we managed 18, last season we managed 14.

“This shows how poor consistency has been this season because we’ve had the same team. This happened because something was wrong, and I need to discover what it was ahead of next season.”

Foster: Players need to look at themselves

Watford goalkeeper Ben Foster has lost on each of his last 13 starts against Manchester City in the Premier League, the longest run of losses by a starting player against a specific side in Premier League history.

Foster told Sky Sports: “We didn’t help ourselves tonight. We didn’t do anywhere near enough to get anything other than what the result suggested. It’s a case of confidence at the minute – it’s just so crazy low.

“I don’t know why it is and why it should be, but we’ve got into a state of trying to minimise as much damage as you can which is such a dangerous way to approach games.”

When asked if Nigel Pearson’s dismissal had impacted the players, Foster added: “We’re well versed in what goes on at this club – it is what it is and you just get used to it in football. We’ve got to roll with the punches and you can’t ever blame anyone for your own performances.

“Everyone of us needs to have a look at ourselves. We’ve got a massive game on Sunday [against Arsenal] and that’s all we’ve got to look ahead to now.”

Guardiola’s side only mustered one shot on target in their 2-0 defeat by Arsenal in the FA Cup – but the visitors were rampant once more against their favourable foes.

Phil Foden and Aymeric Laporte added further goals in the second half to make it another miserable fixture for the Hornets against City, but it was a welcome result for 19th-placed Bournemouth who live to fight another day.

The result means Watford interim head coach Hayden Mullins is the first manager to see his side fail to score in each of his first three Premier League games since Frank de Boer with Crystal Palace in 2017/18 (four games).

It was a bad night for the Hornets, who head to Arsenal with relegation still a possibility.

“We knew they were going to offer a reaction from the game at the weekend against Arsenal,” Mullins said.

“We knew they would come here with a bit of a point to prove and we knew they wouldn’t roll over. The first goal came at a time when we were just getting back after the water break so it was difficult to concede at that time.

“I thought Will Hughes got a touch on the ball for the penalty so that was tough to take, especially just before half-time. We’ll reflect on this game tomorrow and we’ll get the boys ready for the game on Sunday.

“We can’t be thinking of Arsenal having one eye on the FA Cup final. We can only concentrate on ourselves rather than other results going our way. We played against a really good side tonight.”

‘No FA Cup hangover for City’

City have scored 12 goals against Watford in the Premier League this season without conceding once – this goal difference of 12 over the two fixtures is the largest in the top-flight since 1947-48 when Arsenal also scored 12 without reply against Grimsby Town.

Speaking on Sky Sports, Jamie Redknapp said: “If you’re player now, you’d still want to be in Watford’s situation as they’ve got the points on the board and how difficult the games still are for Aston Villa and Bournemouth.

“It was so hard for Hayden Mullins today. There was such a gulf in class and there was no FA Cup hangover. City were really at it.”

Watford travel to face Arsenal at the Emirates on the final day of the season this Sunday, while Manchester City host Norwich, with both games kicking off at 4pm.