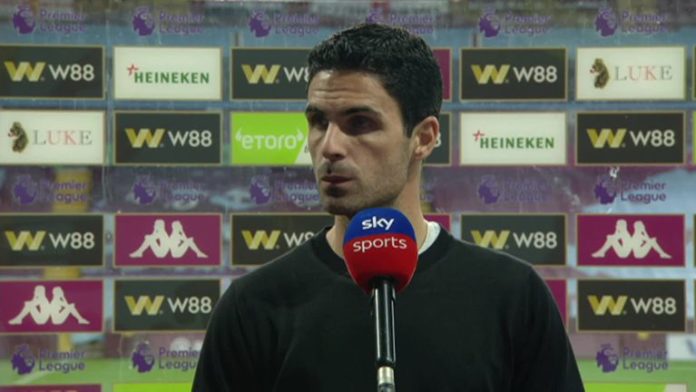 Mikel Arteta insists he has the full backing of the Arsenal board following criticism of owner Stan Kroenke during the 1-0 defeat to Aston Villa , while Jamie Redknapp says the Gunners board must act quickly in support of their head coach.

A plane flew a banner across Villa Park early in the game reading ‘Back Arteta, Kroenke Out’ as some fans showed their opposition to their American owner

It promises to be a difficult summer of Arteta as he looks to rebuild his squad on a budget and their lacklustre performance at Villa, which means they cannot qualify for the Europa League via the Premier League, proved a timely reminder to the size of the task in front of the Spaniard.

Defeat means Arsenal, who can still qualify for Europe by winning next month’s FA Cup final against Chelsea. will now end the season outside the top six for the first time since 1995.

10 – Arsenal have lost 10 league matches for a third consecutive season for the first time since a run of seven between 1981/82 and 1987/88. Testing. #AVLARS pic.twitter.com/ZbRA78cYzO

However, Arteta, speaking to Sky Sports, issued a strong response to the banner, saying he has the full support of the club, who are putting a ‘strong plan together’.

“The Kroenkes and the board and the sporting director, I have their full backing. I have that 100 per cent – the fans have to believe what I’m saying,” said Arteta.

“We are putting a strong plan together to do as much as we can in a short period and the league table doesn’t lie. When you have the margin of points with the top teams it’s for a reason.

“Emotionally and physically it’s been a very demanding week but I saw a team who wanted to fight until the end. I’m not disappointed about the attitude – I know where we are in certain areas and where we need to improve more. We will get that.”

“We need to improve in many areas, the team and individually. The top teams in certain areas are better than us.

“It has to hurt and we have to suffer, it’s not good enough for this club. We know the challenge, it’s really big and we’re excited for what we have ahead of us.

“There are going to be some ups and downs but sometimes it’s good to see the reality and move on and improve.”

Redknapp: Arsenal board have to act

“I think they’re a long way off the top four.

“There are some problems he’s got to sort out, one is Mesut Ozil. I’m sure he’ll be leaving this summer and he’s on an awful lot of money. It’s easier said than done but sometimes if you feel like the player’s not right, you’ve got to bite the bullet and let them go.

“Do you give Aubameyang a new contract? You don’t want to get into another situation where you have a player earning vast amounts of money, with his age, it’s a problem. I personally feel players like him are hard to find and if you can keep him long term, I still think it’s well worth doing.

“I really like Mikel Arteta but with that squad… It’s a bit like David Luiz, who will have moments of looking like the best defender around but then he’ll have his moment when he makes a mistake. I look at that Arsenal back three or four, however they want to play, they will make mistakes and give you chances week in, week out. I think they need to throw money at the problem, it’s as simple as that, because with that squad, he cannot make them a top four team anytime soon.

“Aubameyang wants to play with better players and he wants to know who’s coming in. Of course he gets on well with Lacazette, I’m sure he looks at Nketiah and he speaks very highly of Saka. There are some good players there but he’s a very ambitious player, he’s played at the top, and he’ll want to look at the players that are coming in, and he has every right to, to think ‘I’ve come to the twilight of my career, I want to win something’. He might win something with the FA Cup and he’ll look at that as a great opportunity and they’re the sort of things that can help keep a player. But he wants to know the sort of players that are coming in.

“Another problem they’ve got is Ceballos, who has probably been their best player since the restart. He’s on loan so the question is, what do you do? I really like him and I credit Arteta for that. I liked him at the start of the season when he first came in, he looked really good, really silky but obviously physically was a problem for him. Then it felt like in the three months of not playing, he’s come back as a different player and he’s one you’d want to keep.

“If you were to lose him and lose Aubameyang, that then gives you more problems. The board really have to act and I’m not surprised when I hear about the plane, you have to back this manager. If you believe he’s the right man, you’ve got to back him.

“Arsenal is a huge club, every player wants to be in London and playing for clubs like Arsenal but they’ve got to see that their ambitious and want to win things because right now, they’re a little bit behind the top four sides we see at the moment.”

“It all depends on how much he [Arteta] can spend. Aubameyang, Lacazette, Saka I like, Nketiah is a good young player, Ceballos I really like as well. They’ve got really good players but what they need to sort out, which he’s trying to do, is a structure and way of playing. He’s not had all the players he wanted, he’s going to have the summer to get what he wants but I watched him against Man City [in the FA Cup] and the way they pressed, they fully deserved it.

“They’ve not got a big enough squad like Man City to rotate five or six players and just stroll up to Villa Park and win, but the nucleus of the squad, I do really like. It just needs a few tweaks here and there and probably starting with that centre back position.

“It’s not all doom and gloom. They were under par tonight but a key signing for them is getting Aubameyang wrapped up and then look elsewhere. We don’t know what money Arsenal have got, we’re speculating, but I do see something within this side because of how they played against Man City.

“I think Arteta is the right manager for the job, it’s just finding that right balance between youth and a bit of quality.”

After the elation of Saturday’s FA Cup semi-final win over Manchester City, here was a jarring reminder of the work that lies ahead of Mikel Arteta at Arsenal.

A little tiredness was understandable after their Wembley heroics, of course, but mere fatigue cannot explain the fact that they did not muster a single shot on target at Villa Park despite having 69 per cent of the possession. This was probably the most limp and listless performance they have put in all season and that’s saying something.

Arsenal’s defensive problems tend to dominate any discussions over their frailties, but the lack of creativity and imagination is just as concerning. Since the Premier League restart, they have averaged under four shots on target per game. They rank 14th for expected goals in that period.

Those flaws can be masked when Pierre-Emerick Aubameyang and Alexandre Lacazette are at their clinical best, but when they are not, or when the service simply isn’t there for them at all, as was the case at Villa Park, then there is no hiding from the shortcomings which are holding Arsenal back.

Perhaps Dani Ceballos could help if he was positioned closer to the opposition goal. The Spaniard is one of few players in the Arsenal squad with the vision and flair to unlock defences. But Arsenal’s weakness elsewhere are such that he is needed in a deeper role. Mesut Ozil, meanwhile, appears to be out of the picture altogether.

It is a conundrum for Arteta. The Arsenal manager insisted he has the backing of the club’s owners after the game. But the extent of that backing is not yet clear. What is clear, however, is that this squad desperately needs an injection of creativity as well as defensive reinforcement.

Aston Villa now finish the season at West Ham on Sunday at 4pm, while Arsenal host Watford at the same time at the Emirates, before their FA Cup final at Wembley against Chelsea on Saturday August 1 at 5.30pm.