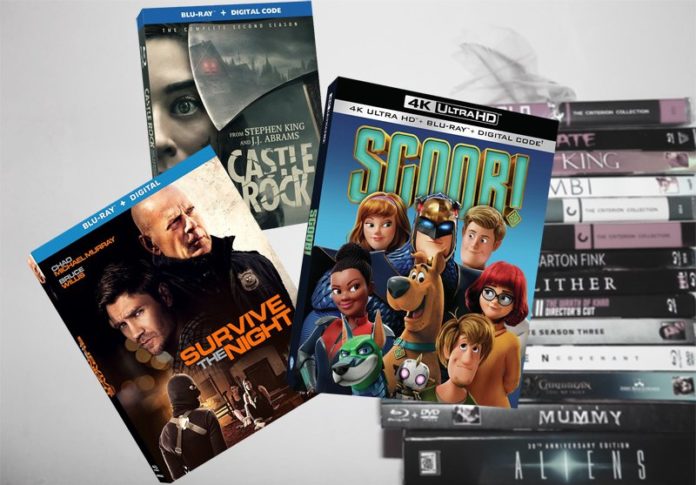 Welcome to ComingSoon.net’s July 21 Blu-ray, Digital HD and DVD column! We’ve highlighted this week’s releases in detailed write-ups of different titles below! Click each highlighted title to purchase through Amazon!

Scoob!
Scooby-Doo, Shaggy and Mystery Inc. face their biggest, toughest mystery yet and discover that Scooby’s secret legacy could be the key to stopping a global “dogpocalyse.”

Resistance
Inspired by the true story of an aspiring Jewish actor (Jesse Eisenberg) who joins the French Resistance to save the lives of children orphaned by the Holocaust. With Ed Harris.

Survive the Night
Bruce Willis and Chad Michael Murray must join forces in order to survive the night in this gripping home-invasion thriller about a doctor and his family being held hostage by a wounded gunman and his unhinged brother.

The Room (DVD)
The only thing more dangerous than a man who can’t get what he wants, is a man who can get whatever he wants.

DeadTectives (DVD)
After a team of reality TV ghost hunters experience true paranormal activity, they must figure out a way to escape with their lives intact.

Secret Weapon (DVD) (exclusive clip)
It’s the Second World War. The Red Army had to retreat in a hurry and left their top secret weapon, “Katyusha”, behind. A group of 8 soldiers is sent to do everything possible not to let “Katyusha” get into the hands of the Germans.

The Whistlers (DVD)
Cristi, a police inspector who plays both sides of the law embarks with the beautiful Gilda on a high-stakes heist. A trip to the Canary Islands to learn a secret whistling language might just be what they need to pull it off.

Well Groomed (DVD)
“Well Groomed” travels a year in the humorous and visually stunning world of competitive creative dog grooming alongside the women transforming their beloved poodles into living sculptures.

Clueless (25th Anniversary Steelbook)
Cher’s world unravels with the sudden appearance of two hunks: a sexy new classmate, and her square but cute ex-stepbrother. Now she’s learning that when it comes to love, she’s Clueless.

Airplane! (40th Anniversary Steelbook)
Voted “one of the 10 funniest movies ever made” by the American Film Institute, “Airplane!” is a masterpiece of off-the-wall comedy.

Ghost
Patrick Swayze plays a ghost who teams with a psychic (Whoopi Goldberg) to uncover the truth behind his murder — and to rescue his sweetheart (Demi Moore) from a similar fate.

The World in His Arms
Set in 1850, Gregory Peck stars as swaggering sea captain Jonathan Clark, who poaches seal pelts off the coast of Russian-owned Alaska. However, the real danger begins upon returning to San Francisco where he falls for a countess (Ann Blyth) fleeing from her engagement to a greedy Russian prince (Carl Esmondr). When Clark learns of her kidnapping, he sets sail—amid gale-force winds and treacherous seas—on a harrowing race to rescue his lady love and beat his longtime rival (Anthony Quinn).

Girl Crazy
Mickey Rooney. Judy Garland. Gershwin music. And Tommy Dorsey to play it. Who could ask for anything more?

The Sunlit Night
Frances is an aspiring painter from New York City who goes to the farthest reaches of Arctic Norway for an assignment she hopes will invigorate her work and expand her horizons. Under a sun that never quite sets, and the high standards of an unforgiving mentor, Frances must navigate between ambition, desire, obligation, and risk in order to find a way forward.

Dirt Music
The fervent attraction between Georgie (Kelly Macdonald), a woman stuck in a loveless relationship, and Lu (Garrett Hedlund), a musician with a tragic past, gets the better of them when secrets are uncovered that will change their lives. The stunning landscape of Western Australia is the backdrop for an impassioned tale of love and grief in this adaptation of the acclaimed novel by Tim Winton.

The Painted Bird
A boy navigates the perils of WW2 Europe to reunite with his family in this epic adaptation of the acclaimed novel. Harvey Keitel, Udo Kier, Stellan Skarsgard, and Barry Pepper star.

Ghosts of War
Five battle-hardened American soldiers are assigned to hold a French Chateau near the end of World War II. Formerly occupied by the Nazi high command, this unexpected respite quickly descends into madness when they encounter a supernatural enemy far more terrifying than anything seen on the battlefield.

Castle Rock: The Complete Second Season
Set in the Stephen King multiverse, this season combines the mythological scale and intimate character storytelling of King’s best-loved works, weaving an epic saga of darkness and light, played out on a few square miles of Maine woodland. In Season two, a feud between warring clans comes to a boil when budding psychopath Annie Wilkes, Stephen King’s nurse from hell, gets waylaid in Castle Rock.

Curb Your Enthusiasm: Season 10 (DVD)
Larry David is back, once again landing himself in one self-inflicted faux pas after another in Season 10 of the award-winning comedy. This season, Larry gets into a series of escalating predicaments as he takes on a major project to spite a new adversary–which proves to be more complicated than he anticipated.

Home From Home: Chronicle of a Vision (DVD)
Set in a dreary, unforgiving mid-19th century German village in Hunsrück, Home From Home captures the plight of hundreds of thousands of Europeans who emigrated to faraway South America to escape the famine, poverty and despotism that ruled at home.