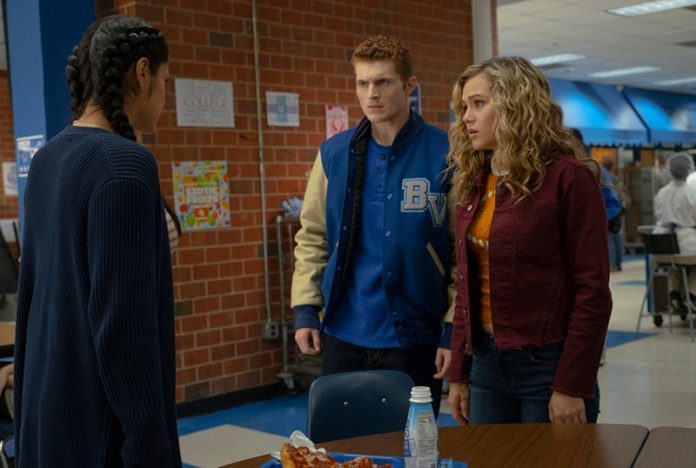 In the tenth episode of DC Universe’s Stargirl, as Henry Jr. hones his newfound skills, secrets from his family’s past force him to make a difficult decision. Tensions between Pat and Barbara have her revisit her own past. 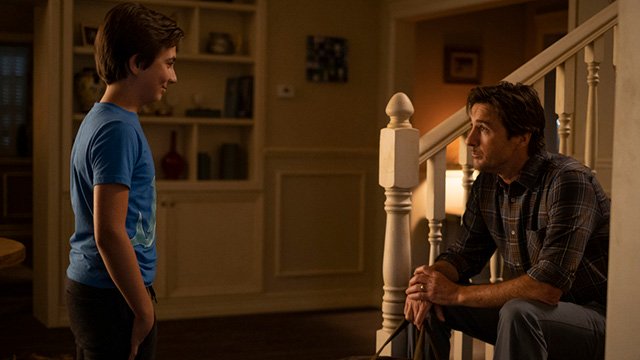 The episode starts two years ago in Blue Valley when Barbara and Pat first met at the local diner, bonding over a shared love of banana splits and family history. In the present, Pat and Courtney try to explain the whole superhero situation to Barbara, including how her boss, Jordan, killed Starman, who Courtney believes is her dad. Barbara gets the low-down on the JSA, ISA, STRIPE — and lashes out in anger at Pat for putting this in Courtney’s head.

Barbara sends Courtney to her room and tells Pat that if everything Pat is saying about him being a sidekick and the “lunacy” superhero stuff is true, then their marriage is a lie. Pat disagrees, saying that their relationship, their family, is real, and that none of this was supposed to happen. When Barbara realizes that Courtney’s “car accident” wasn’t actually an accident, she kicks Pat out of the house. Mike, knowing that his stepmom is mad but not knowing why, decides to pack a bag and spend the night with his dad at Pat’s garage.

At the hospital, Henry speaks to his now awake father who has forgotten 10 years of his life. Dr. King believes his memory will come back, and has to relive the news that his wife, Merri, died after a drowning accident and that’s when they moved to Nebraska. King also discovers that Henry inherited his father’s gift and promises to help his son get a handle on his abilities. Later, Henry sits by while his father sleeps and hears his thoughts as King thinks about his dead wife, Icicle, and Starman. Henry leaves the hospital in search of answers, and Jordan enters Dr. King’s room as soon as Henry is gone. 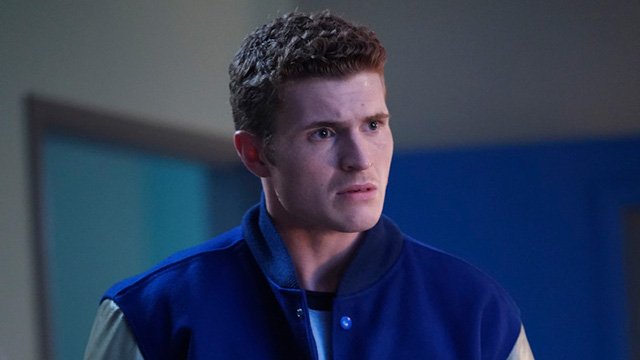 At home, Henry begins searching through his father’s tapes and locates one for the day his mother died. He finds out his father along with the ISA killed the JSA, including Starman, Merri’s brother. Henry also learns that Jordan was the one who killed Merri as well. Elsewhere, the Cosmic Staff wakes up Courtney but Courtney sends the staff back to its crate.

Jordan tells King in the hospital that Project: New America is almost a reality, and how Dr. Ito’s machine will allow them to control minds in over six states to reshape their thoughts to help them to “see the light.” King asks about Stargirl, but the two are suddenly interrupted by the Cosmic Staff when it comes flying into the room to attack Jordan. King uses his telepathy to hold off the staff and Jordan freezes it, rendering it useless. Henry runs to the room and sees his father with Jordan and the frozen staff. As the two older men leave, Henry hides.

The next day, Courtney discovers her staff is missing. When Courtney asks her mom about it, Barb tells her that they’re leaving Blue Valley and Pat behind, and that Starman isn’t her father. Barb heads to work and tells Courtney to start packing. Instead, Courtney leaves and goes to Pat’s shop. Courtney tells Pat about the missing staff and Pat tells Courtney to go home and pack and says that losing Barb will hurt forever but he needs to know they’re safe and them leaving Blue Valley is for the best. Pat races to The American Dream to get Barbara away from Jordan while Mike confronts Courtney wanting the truth. When she doesn’t tell him, he’s convinced she never wanted him or Pat around anyway. 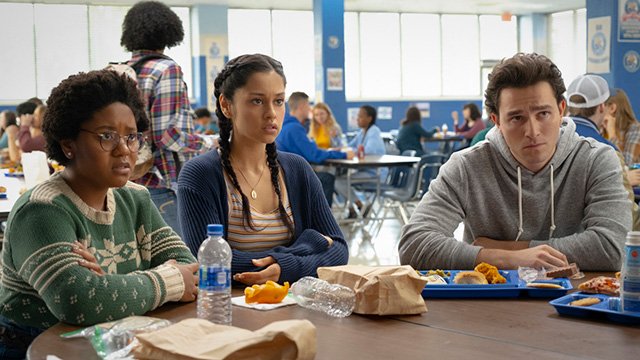 Henry tracks down Courtney to speak with her, but when he touches her, she suddenly can see all of his thoughts. Courtney is stunned to realize that Merri was Starman’s sister and hugs Henry when she realizes that he might be her cousin and that makes them family. Henry explains that Jordan has Courtney’s staff and his dad. Henry says that King is different, now that he can’t remember the last 10 years, and that his mother was changing him into a better person before Jordan killed her. Courtney says they’ll need help taking on Icicle.

At the office, Barb sends an email to Courtney’s father, Sam, asking him to contact her. She then begins researching Starman. At school, Courtney catches the other JSA members up on everything that’s happening and how they need Henry’s help to stop the Injustice Society. Henry promises not to tell anybody anything; Rick isn’t very perceptive to teaming up with Henry Jr. or saving his villainous father. After some tension, Beth convinces Rick and Yolanda to help, but Yolanda says she and Courtney are not friends anymore now because Courtney chose Henry after everything he did to her.

Pat arrives at The American Dream and tells Barbara she needs to get Courtney and get far away from Blue Valley. Barbara starts to explain she was trying to piece everything together between Jordan, Sam, and Starman, but the couple are interrupted when Jordan walks in the office accompanied by his parents. Elsewhere, the suited-up JSA, along with Henry, head into the tunnels to find the Cosmic Staff and King. Beth has her goggles, but Chuck keeps cutting in and out and will be mostly unable to assist. The team splits up, Rick and Beth in one group and Courtney, Yolanda, and Henry in another, to begin their search.

Back at The American Dream, Jordan’s parents drop off some treats to thank them for dinner. After they leave, Barbara reveals she recorded Jordan’s parents’ conversation in Norwegian so they can translate what they were saying in her office. In the tunnels, Henry tries to apologize to Yolanda but she says he can’t take it back. Rick and Beth find Solomon Grundy, the “thing” that killed Rick’s parents, while the other three spot Dr. Ito working to bring back King’s memories. Courtney also sees her staff, but suddenly Cindy starts yelling from her cell, giving away the team’s location. Ito’s drones close in on Courtney, Yolanda, and Henry and a fight breaks out while Ito observes before he goes after Stargirl.

Using the Hourglass to give himself strength, Rick decides to break open Grundy’s cell to kill him. Luckily, before he can, a few drones show up and after he deals with them, Rick and Beth make a run for it. As the fight continues, Yolanda frees Courtney’s staff, who uses it to defend against Ito as the Dragon King’s true, monstrous face is revealed. When King wakes up, Henry is horrified to discover his dad has regained all of his memories and is, essentially, the bad guy again. When King tries to touch Henry and tells him this is who they are, Henry telepathically blasts his father away. Henry, Courtney, and Yolanda retreat and regroup with Beth and Rick.

At the diner, Pat and Barbara listen to the translated conversation with Jordan’s parents saying how they like Barb and notice how Jordan looks at her, but that none of it will matter soon once the machine is up and running, leaving Pat and Barbara to wonder what they’re planning. At the office, Barbara’s computer shows her receiving a reply message from Sam.

In the tunnels, Henry protects the group by helping them to get through a barred barrier as his dad closes in on them. He faces off with his father, telling him he can be good and that mom believed that, too. King reveals that he’s the one who killed Merri and wants Henry by his side. Henry tells his father he’ll never stand by his side and King tells his son “goodbye” before blasting him back towards the bars, where, on the other side Courtney, Rick, Yolanda, and Beth frantically try to break back through to save Henry but Brainwave’s powers prevent a rescue. As the ceiling begins to crumble, Henry looks at Yolanda and tells her that he really is sorry as Yolanda cries. Henry then tells Courtney she was right, people are good, and to not let this event change her mind. Henry then disappears underneath a mass amount of rubble brought down by his father, seemingly killing his son in front of the distraught teens.

What did you think of the new episode of Stargirl? Let us know in the comment section below!