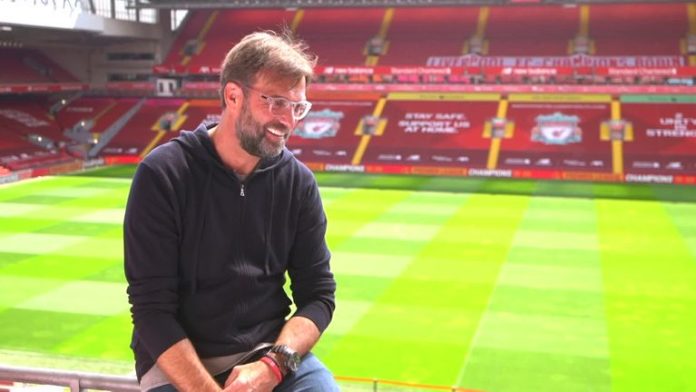 Liverpool manager Jurgen Klopp says lifting the Premier League trophy in The Kop at Anfield will be the most special moment of the staff and players’ lives.

Premier League champions Liverpool will be handed the trophy after Wednesday’s game with Chelsea at Anfield, having romped to the title with a record seven games to spare, their first top-flight crown in 30 years.

Klopp insists it is vital his players are in a position to enjoy the moment, and says winning the title for Liverpool is the most “special thing you can imagine.”

“I told the boys already that we have to prepare two things this week,” he told Sky Sports. “Prepare for the game against Chelsea, which we will do in training, and we have to make sure that we really feel the right thing in the moment when it happens.

“On Wednesday, we will cherish it. In this moment, we have to stop for a second, look at it, be really happy about it, enjoy it together with our fans all over the world, in heart and mind, and make it the most special moments of our life so far.

“Being here champion is the most special thing you can imagine. We all have to make it a special moment inside and keep it forever inside.”

Though Klopp was a title winner with Dortmund in 2011 and 2012, only one member of his squad has won the Premier League – James Milner with Manchester City.

And Klopp is keen to cherish the moment on Wednesday night, despite no fans being in the stadium.

“It is so big and so incredible what the boys did, and how they did it, and for different reasons it was very challenging. We have to feel it in an appropriate way, and we will.

“We are since five matchdays or so ago a champion, which is completely special. We’ve had guard of honours, all the things we’re not used to, then we win a game: great. We lose a game: not so great. I will never underestimate a defeat, but we cannot forget that we won the league in a pretty exceptional manner.”

Liverpool vs Chelsea Fanzone available to everyone

Sky Sports Fanzone will be made available to everyone for Liverpool vs Chelsea and the Premier League trophy lift on Wednesday evening, whether you’re a Sky Sports subscriber or not.

TAP HERE TO ACCESS FANZONE FROM 7PM ON WEDNESDAY

And all Liverpool supporters will be able to have their own Premier League title party at home and the ability to watch with family and friends thanks to Sky Sports Fanzone.

Whether you’re a Sky Sports subscriber or not, everyone will be able to use a new feature on the Sky Sports website on your phone (optimised on iOS for iPhone 8 and above), laptop or PC to watch select matches with friends in a video room and interact while the action unfolds, giving them the chance to chat about the match and influence the crowd noise they hear on screen. It will run from an hour before the game until an hour after the game.