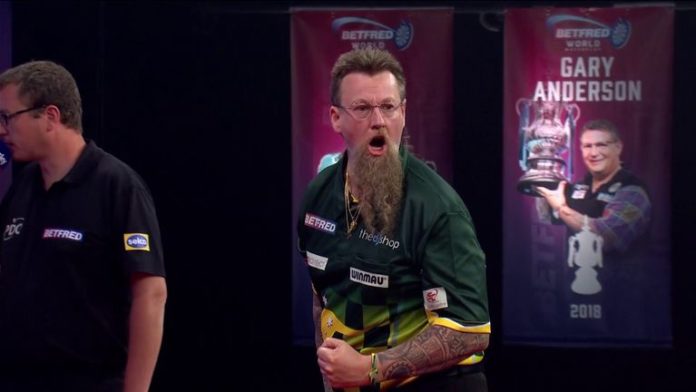 Coverage of the second round continues from 7pm on Sky Sports Action on Wednesday with Peter Wright, Glen Durrant and Daryl Gurney all in action

A tournament that has already lost defending champion Rob Cross and world No 3 Gerwyn Price now has an even bigger shock after Simon Whitlock dumped world No 1 Michael van Gerwen out of the World Matchplay in Milton Keynes.

Australian Whitlock was in incredible form to capitalise on a woefully-out-of-sorts MVG, who averaged just over 90 and missed 20 darts at double in an 11-4 defeat – the third year in succession he has failed to make the last eight of the sport’s second-biggest tournament.

Whitlock started fast and never looked back. Following a five-leg winning streak to start the match, he sprinted to the finish line with a four-leg burst that saw him claim a first victory over the Dutchman since 2016 and blow the tournament wide open.

Another night of shocks saw Nathan Aspinall become the fifth member of the world’s top 16 to crash out in the first round when he was beaten by Dimitri Van den Bergh, but Gary Anderson and Michael Smith avoided a similar fate to join Whitlock in the last eight.

Van Gerwen has not enjoyed the best of times at the World Matchplay since his run of three finals and two titles between 2015 and 2017, and the tournament proved beyond him again as Whitlock chalked up a memorable 11-4 victory to book a quarter-final with Anderson.

MVG has now failed to reach the last eight for three successive years – a second-round defeat to Glen Durrant last year followed a shock first-round exit at the hands of Jeffrey de Zwaan in 2018.

Whitlock produced his best performance in years to see off a man who had previously proved his nemesis, with a win in October 2016 the only time he had triumphed over MVG in their last 29 matches.

Whitlock started fast, averaging in excess of 110 alongside a pair of 13-darters to forge the early initiative. Missed doubles from Van Gerwen allowed Whitlock to sweep all five legs of the opening session before normal service appeared to be resuming when MVG returned to claim the first two after the break.

The Dutchman looked set to chip away when Whitlock missed two darts for a 7-2 advantage and he closed to within three. However, as double-four finishes and huge roars were traded, it was ‘The Wizard’ who still held the significant advantage.

That was as good as it got for Van Gerwen, as Whitlock raced to the winning post without a shred of nerves to claim his best win over Van Gerwen since the 2012 World Championship, at which time a then-22-year-old MVG had not even registered his first major victory.

Anderson prevails to see off Wade

Gary Anderson produced flashes of his brilliant best to see off James Wade in a contest between two proven champions and former winners of this prestigious tournament.

Anderson twice went six darts of the way towards a magical nine-dart leg, and while he failed to produce perfection, he conjured a five-leg burst midway through the match that proved to be Wade’s undoing.

Wade’s 148 was the highlight of the gritty opening exchanges with the pair splitting the first eight legs. Anderson hit the front at 5-4 after Wade made a mess of 25.

‘The Flying Scotsman’ punished more Wade mistakes to move within two of the finishing line, only to wobble for the first time. A 16-darter stopped the rot for Wade and two more quickly followed to trail 9-7.

But Anderson claimed two of the last three legs to reach the last eight for the fourth time in seven years.

Bully Boy fights back to sink Suljovic in thriller

Michael Smith and Mensur Suljovic, runners-up in the last two years, served up a blistering contest that went beyond the slated best of 21 and into a 26th leg, where Smith eventually prevailed 14-12.

‘Bully Boy’ has lost five major TV titles – including to Cross in last year’s Matchplay final – and he battled back brilliantly from 9-6 down to seal a last-16 date with Krzysztof Ratajski.

Smith was playing catch-up throughout. A brilliant 10-dart leg saw Suljovic fly out of the gate and into an early three-leg advantage. Trading big finishes, Smith drew within two legs only to blow three darts for a level contest. That was the catalyst for another Suljovic burst that was capped by a stunning 125 after Bully Boy missed two at double 10.

It looked like the missed doubles would prove crucial but Smith dug deep again. A clinical 72 left the game all square at 9-9 and after splitting the next two, Smith hit the front for the first time when he took an 11-10 lead.

There was no separating them until Smith won an edgy 25th leg before sealing the win with a classy 110 – the eighth 100+ finish of the match.

Up next for Smith is Ratajski after the rapidly-emerging Pole saw off Germany’s Gabriel Clemens, who knocked out Cross on Sunday night, in a high-class encounter to end the night.

Ratajski has risen to 13 in the world on the back of a remarkable 18 months and while he was never able to totally shake off Clemens, he eventually sealed a place in the last eight with a 12-10 victory.

Dimitri Van den Bergh looked in the mood to deliver on his promise with an impressive 10-5 win over world No 6 Nathan Aspinall to complete the first-round action in the opening match of the night.

The Belgian is making his debut in the tournament and started fast with an early break helping him into a 4-2 lead. He maintained that pressure with a couple of huge 100+ finishes, punishing Aspinall’s missed doubles.

Van den Bergh averaged more than 102 for the majority of the match and there was little an erratic Aspinall could do to keep pace. The Belgian’s consistency took him across the finish line in style and condemned ‘The Asp’ to a first-round exit for the second year in succession.

Van den Bergh will next face Joe Cullen in a wide-open section of the draw that includes Danny Noppert and Adrian Lewis – opportunity knocks for one of the quartet.