Home Sport Who is staying up: Villa, Watford or Bournemouth? 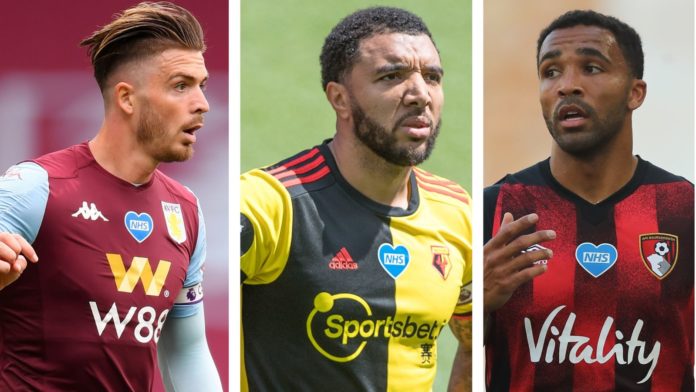 Who will join Norwich back in the Sky Bet Championship? Aston Villa have taken a big step towards safety but it is not settled yet ahead of the final round of Premier League fixtures…

We assess the clubs in danger, their remaining fixtures, and what might seal their fate heading into the final round of games…

Brighton are staying up.

While the 0-0 draw with Newcastle on Monday will not live long in the memory, the point it secured has given Brighton the precious guarantee that they will be a Premier League club again next season.

The critical result was the 2-1 win over Arsenal immediately after the restart followed by a gritty draw at Leicester. Even though Brighton have largely found it tough going since then, losing to Manchester United, Liverpool and Manchester City, a win at Norwich and another draw with Southampton had already all-but secured their Premier League status even before the Newcastle stalemate made it official.

Brighton boss Graham Potter said: “There were a few nerves around, but l am so proud of how the players have responded. We have got the job done and we’re very proud to be in the Premier League next year.”

The Hammers are almost there.

West Ham are not yet mathematically safe with 37 points on the board, but, in all likelihood, are set to stay in the Premier League: three points clear of danger, with a game in hand on the teams below them and a far superior goal difference too.

Credit where it is due, West Ham have claimed three important wins since the restart to make themselves all-but safe: against Chelsea, Norwich and, in last Friday’s ‘relegation cup final’, Watford.

A crucial factor in their likely escape has been their form against the rest of the current bottom six – W5 D4 – in matches this season.

Aston Villa’s 1-0 win over Arsenal on Tuesday night could prove priceless. After Watford’s 4-0 loss to Manchester City earlier in the evening, the victory moves them out of the relegation zone, above the Hornets on goal difference, and puts them in control of their own destiny ahead of their final game of the season against West Ham at the London Stadium.

Beat West Ham, and Dean Smith’s side should survive. But with Watford and Bournemouth facing tricky games against Arsenal and Everton respectively, they may not even need to take three points as they look to secure their Premier League status.

It is to their immense credit that they have managed to turn the situation around. Villa went 10 Premier League games without a win either side of the lockdown, but victories over Crystal Palace and Arsenal and a draw with Everton might just end up rescuing their season.

Speaking to Sky Sports after the Arsenal win, Villa boss Smith said: “A great performance but an even better result, because the result is what we needed.

“It’s a big boost, that’s for sure. We knew we had to get that win to catch Watford up. Now we’ve got the season in our own hands and that’s all you can ask for going into the last game.

When Nigel Pearson was appointed by Watford in December, the remit was simple. His job was to keep a team up that was then cut adrift at the bottom of the table in the Premier League.

It is a decision which did not exactly pay immediate dividends as Watford were routed 4-0 by Manchester City. And it is the scoreline of that defeat which puts Watford’s stay in the Premier League in real jeopardy heading into the final day of the season. Watford now need to better Villa’s result on the final day in order to stay up – or hope that Villa lose by a margin of two goals more than them.

Bournemouth had kept their Premier League survival hopes alive after coming from behind to beat Champions League-chasing Leicester 4-1 – but defeat to Manchester City – albeit after a plucky performance – and a 2-0 loss to Southampton has really left them on the brink.

Watford’s defeat to Manchester City on Tuesday handed them a lifeline, but Aston Villa’s victory over Arsenal was bad news for them. They are now three points behind both of their rivals, their only hope of survival being if they beat Everton on the final day, and Watford and Villa lose to Arsenal and West Ham respectively. Goal difference would then be their saviour.

After their loss to Southampton, Cherries boss Eddie Howe said: “I just need to digest this game before thinking about next week. While we’re still there, there’s still hope, we just have to believe until it is mathematically impossible. You never know in football, crazier things have happened.

“But I’m very disappointed today because a big chunk of our destiny and future was still in our hands today, and that’s slipped away.

“It is difficult. Usually we have been free scoring and creating a bundle of chances. For some reason that hasn’t happened [this season]. We have worked to try and change that, and the best spell has probably been the last few games.”

Redknapp: Everything in Villa’s favour

“It makes all the difference for Villa,” he said after their win over Arsenal.

“They’ve all got tough games, but the game you would most want would be West Ham away, if I’m honest.

“For Watford, Arsenal cannot be as bad as they were today, so I think that’s a really difficult fixture.

“Bournemouth are going to an Everton team who just got a really good result against Sheffield United.

“So I think, right now, everything is in Aston Villa’s favour. If they can go and get three points, it’s all over. What a feeling for them because they’ve never really been in this position where it’s in their hands.

“Watford and Bournemouth are now relying on other teams. It’s still all to play for, but Aston Villa are the team you want to be right now. At the start of the day, I didn’t think that would happen.”