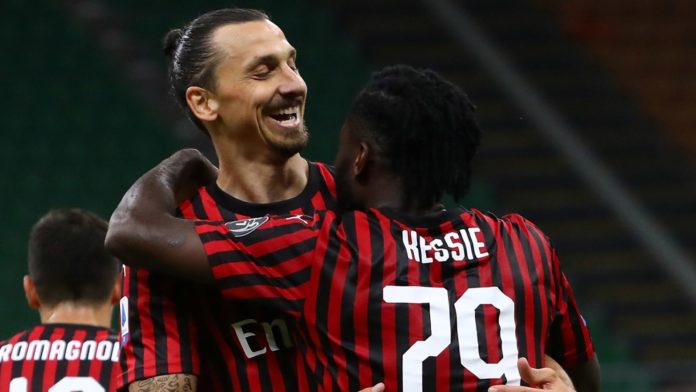 AC Milan up to fifth in Serie A; Inter play on Wednesday

Ibrahimovic opened the scoring in the 19th minute before a frantic finish to the first half shaped the game.

Sassuolo were awarded a penalty for a handball by Hakan Calhanoglu – only confirmed after a lengthy VAR check – allowing Francesco Caputo to level.

But Ibrahimovic restored Milan’s lead in the second minute of time added on before Mehdi Bourabia collected a second yellow five minutes later.

Sassuolo played the entire second half with 10 men but the scoreline remained the same as Milan moved to fifth, a point ahead of Roma, though having played a game more.

Atalanta up to second

Atalanta moved up to second place in Serie A as a 1-0 win over Bologna saw them extend their unbeaten run to 15 games.

Luis Muriel’s 62nd-minute strike took La Dea to 95 goals for the season, the highest tally for any Serie A side in more than 60 years.

Tempers boiled over in the first half when the two coaches, Atalanta’s Gian Piero Gasperini and Bologna’s Sinisa Mihajlovic, engaged in a furious row, before half-time substitute Muriel settled it after the hour.

Inter Milan, two points behind with a game in hand, host Fiorentina on Wednesday.