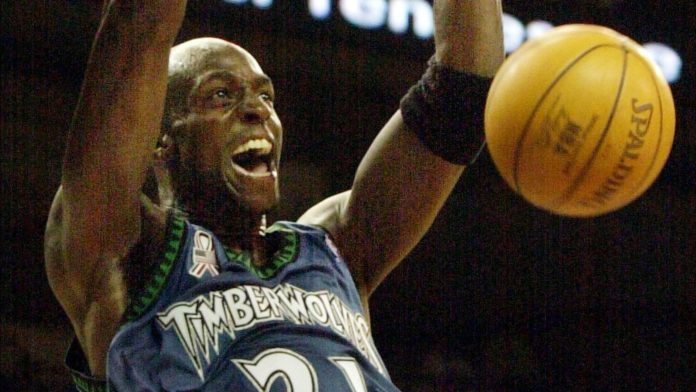 The Minnesota Timberwolves are for sale and franchise icon Kevin Garnett is part of a group of investors looking to buy the team, the Hall of Famer announced on Tuesday.

Sportico reported owner Glen Taylor had retained the Raine Group to sell the franchise, adding that several parties have bid on the team.

Others interested in purchasing the team, according to ESPN’s Adam Schefter, include the Wilf family, owners of the Minnesota Vikings, and Timberwolves minority owner Meyer Orbach.

Taylor confirmed to The Athletic that he has received inquiries, including from groups who want to relocate the franchise, which is a non-starter.

“People have inquired who are interested, but they want to move the team,” Taylor told The Athletic, adding that the WNBA’s Lynx would likely be included in any deal. “They are not a candidate. We’ve made that very clear. Everybody’s been told it has to stay in Minnesota.”

Taylor, 79, bought the franchise in 1994 for just under $90m and has sold off a few minority stakes in recent years. Sportico reported he is seeking at least $1.2 billion to sell the team and that a deal could be reached within a month.

Forbes pegged the franchise’s value at $1.38 billion. Taylor has a net worth of around $3 billion.

My passion for the Minnesota Timberwolves to be a championship team is
well known but I have a deeper affection for the city of Minneapolis. I
once again want to see Minneapolis as the diverse and loving community
that I know it is. (1/2)

Garnett took to Instagram on Tuesday, replying to a post about the potential sale of the Timberwolves, “I’m one of the groups trying. … LAWD PLSS LET MY GROUP GET THIS.”

He also wrote on Twitter, “My passion for the Minnesota Timberwolves to be a championship team is well known but I have a deeper affection for the city of Minneapolis. I once again want to see Minneapolis as the diverse and loving community that I know it is.

“No two people love the city more than myself and Glen Taylor and I look forward to trying to work with him to achieve my dream.”

The Athletic reported that Garnett’s group is preparing a bid to submit to Taylor.

According to Garnett, Taylor backed out of an arrangement with former coach Flip Saunders – in which Garnett would join the team’s front office and/or ownership group following retirement – after Saunders’ death in 2015.

In April, Garnett told The Athletic, “At this point, I don’t want any dealings with Glen Taylor or Taylor Corp or anything that has to do with him. I’ll always have a special place for the city of Minneapolis and the state of Minnesota in my heart. But I don’t do business with snakes.

However, Garnett took a different stance Tuesday, posting on Instagram, “Regardless of past feelings with Glen, I would love nothing better than to become partners going forward in this great but massive rebuilding of a city [that] I deeply love! Putting the past to the side. Focus on the now.”

Garnett was named for enshrinement in the Basketball Hall of Fame this spring, and he’ll be officially enshrined when the postponed event happens in 2021.