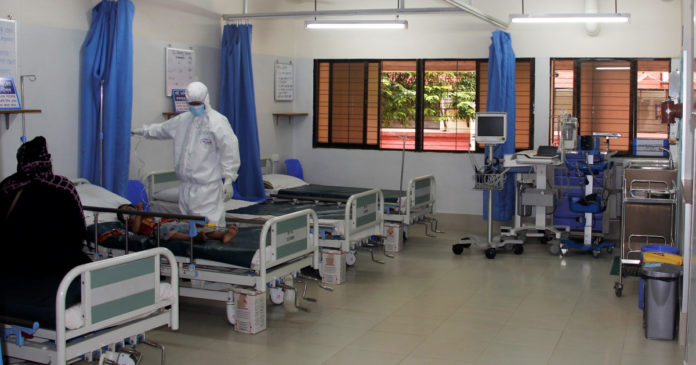 Cox’s Bazar – Having provided medical care to over 100,000 patients across Cox’s Bazar over the past year, the renovated emergency department of Cox’s Bazar Sadar Hospital marked its first anniversary on 20 July 2020.

Since July 2019, the International Committee of the Red Cross (ICRC), in close partnership with the Sadar Hospital, has been working to strengthen the delivery of emergency health-care services and the administrative capacity of the department, especially in the times of COVID-19.

The staff has been trained in emergency care and essential medication and equipment have been made available. The hospital is the district’s main government medical facility that covers close to 3.5 million people, including host communities and displaced population from Rakhine.

The ICRC-supported emergency department of the main government medical facility in Cox’s Bazar that covers close to 3.5 million people, including host communities and displaced population from Rakhine. M KARIM / ICRC

The department has attended to almost 2,000 critical patients and boasts of a survival rate of 98 per cent. By introducing one-attendant-per-patient policy, the management has been able to tackle the issue of overcrowding.

Additionally, the strengthened capacity of the department that includes a ten-bed isolation wing has led to a drop in unnecessary admissions, which have come down by 65 per cent, markedly reducing the overcrowding in hospital wards.

Explaining the importance of the emergency department in the district’s busiest hospital, Farrukh Islomov, the head of the ICRC subdelegation in Cox’s Bazar, says: “Within a year of opening in its renovated avatar, the department has provided emergency care to over 100,000 patients across Cox’s Bazar, including host communities and displaced population from Rakhine. To improve the delivery of health services, a triage system has been put in place so that patients needing urgent attention are provided with emergency care first. This has saved many precious lives.”

Appreciating the ICRC support, Dr Shaheen Abdur Rahman, the head of the Emergency department, says, “Before the renovation work, around 100-150 people used to seek emergency care in the hospital. This number increased to 350-400 once we opened the renovated facility. It shows that people’s trust in the department has gone up and it has set an example for other government hospitals in Bangladesh.”

A patient is receiving emergency medical care at the ten-bed isolation centre in the department. M KARIM / ICRC

With the increasing threat of COVID-19, preventive measures like physical distancing, temperature checks and frequent handwashing have been adopted. Constant disinfection is carried out in the department and the staff have been provided with personal protective equipment kits.

Currently, work is under way to open a dedicated emergency department for COVID-19. In this regard, we have been training nurses and doctors and have also handed over medical equipment and medicines worth around 80 million Bangladeshi taka.

An agreement has been signed with the hospital to provide a refrigerated container to temporarily store the dead at Cox’s Bazar Sadar Hospital until their families take them for a dignified burial.

Further work is on to develop emergency medicine training programmes for doctors and nurses, and for making the emergency department a “Centre for Excellence in Emergency Medicine” in Bangladesh, over the next three years.

Besides this, we have been extending support to government health complexes in Ukhiya and Teknaf, together with the Bangladesh Red Crescent Society, since 2014. Host and displaced communities have also received primary health-care services through mobile medical teams since the onset of the Rakhine crisis in 2017.