Home World Opinion: In Venezuela, US sanctions are only hurting 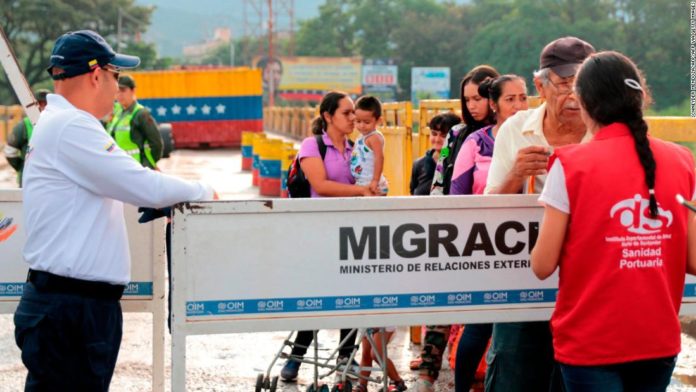 The scale of Venezuela’s crisis is shocking. Nearly five million people have left the country, according to the migration group IOM — nearly a fifth of its entire population.
Even before the Covid-19 pandemic, many of those still in the country lacked access to food and other necessities, with the World Food Programme estimating in February that one out of three Venezuelans was “food insecure and in need of assistance.” The recently released National Survey on Living Conditions revealed that nearly 80% of Venezuelans live in poverty, with 639,000 chronically malnourished children.
Now, add the pandemic. Venezuela officially reported more than 11,000 confirmed Covid-19 cases, with 104 deaths, and would seem to be faring better than some of its neighbors — based on the government’s officially recorded totals — supported by efforts to contain the spread of the virus that include police-enforced restrictions on movement, Reuters reported.
But there are obvious concerns about the reliability of official data and testing, given both political pressures and the dire state of all public services and utilities (as an indication, over 70% of hospitals reported failures in water service in 2019).
There are also concerns about the country’s capacity to cope with the expected infection and hospitalization rates seen elsewhere: Venezuela currently has fewer than 11,000 public hospital beds, and fewer than 400 ventilators.
While Venezuela’s isolation seems to have spared it from the immediate impact of the virus, its struggling health care system is grossly underequipped to handle the peak to come.
While Venezuela’s dysfunctional economy is primarily the responsibility of the country’s leader, Nicolas Maduro, the United States needs to acknowledge that its financial and sectoral sanctions have had a hand in Venezuela’s undoing.
Blocked access to US financial markets and the ban on dealings with state-owned oil company PDVSA, along with corruption and mismanagement, have brought oil exports to a 70-year low, with Venezuelan people suffering the consequences of lost revenue.
Secondary sanctions against Russian oil company Rosneft, and pressure on others, have hit fuel imports from foreign refineries, creating gasoline shortages that are keeping doctors and nurses from reaching hospitals, as The Washington Post reported in April. This, in a country with the world’s largest oil reserves.
At the same time that the economic impact of the pandemic has reduced vital remittances from abroad, sanctions have also made it considerably harder for civil society and humanitarian organizations to receive badly needed funding to engage in life-saving work.
Banks and vendors are simply shunning any business with Venezuela, as The Wall Street Journal reported. Directives and exceptions from the US Treasury allowing for humanitarian transactions are not enough to activate the necessary flow of aid.
As a former ambassador to South Africa, from 2013 to 2017, I am well aware that economic pressure, when aligned with diplomacy, can sometimes support dramatic political progress.
As president of the Open Society Foundations, which is supporting responses to the humanitarian crisis in Venezuela, I have also seen the opposite — broad sanctions hurting ordinary people, and entrenching the power of those at the top. This is what is happening now in Venezuela, with the odds stacked against free and fair legislative elections in December, and an opposition divided and tarnished by scandals.
It is time for the United States to stop being part of the problem and be part of an international effort to address ongoing humanitarian catastrophe.
Unfortunately, there seems to be little hope of this happening under the Trump Administration, especially with some members of the Republican Party eager to use fantasies of military intervention or regime collapse to inspire Florida voters in November. On their part, the Democrats should keep their options open, and avoid a battle to out-tough President Trump on Venezuela.
The need to lift all sanctions contributing to the humanitarian crisis in Venezuela is clear. Remaining sanctions, targeting corrupt and abusive officials, should align with diplomacy.
Using sanctions as a scalpel, and not as a sledgehammer, the United States should actively engage in midwifing additional humanitarian agreements — such as the recent initiative with the Pan American Health Organization — that allow international assistance to reach the country, and eventually enable a path to free and fair elections.
More broadly, it is time for Washington to take a step back and review its approach to the use of sanctions globally — with the State Department, House Foreign Affairs Committee, and Senate Committee on Foreign Relations working to develop a set of principles to prevent a mess like Venezuela from happening again.
The United Nations is the only international actor with the capacity and experience to tackle a crisis like Venezuela’s. At the Security Council, the US could foster a resolution based on a minimum consensus with China and Russia of allowing and supporting in-country operations of the World Food Programme to prevent a famine.
From there, together with the European Union and Latin American governments, the US should work with all political factions to build a path to free and fair elections.
US interests would be best served by prioritizing what Venezuelans need most to reclaim their destiny: address the humanitarian crisis that has caused millions to flee, and eventually support Venezuelans in designing their own way back to the ballot box — in that specific order.