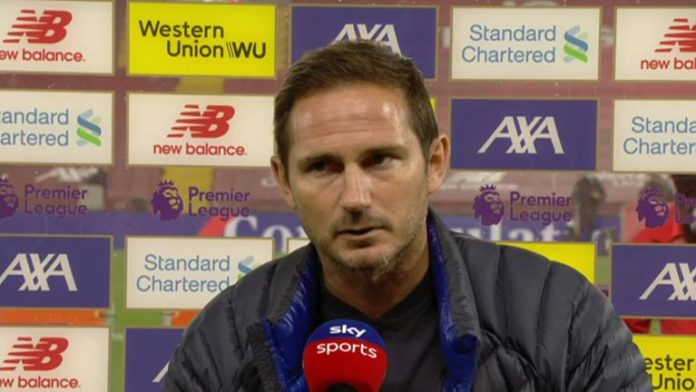 Chelsea manager Frank Lampard has warned Liverpool not to get “too arrogant” following a confrontation with Jurgen Klopp during his side’s 5-3 defeat at Anfield.

Liverpool were in no mood to allow Chelsea to spoil their Premier League trophy presentation party with an entertaining encounter entirely befitting the occasion.

But, amid a cacophony of pyrotechnics going off outside the ground, the air was considerably more heated in the technical area with Klopp and Lampard exchanging words after Mateo Kovacic launched into Sadio Mane from behind to halt the Senegal international’s brilliant run from the halfway line.

“Fair play to Liverpool Football Club, they’ve won the league, but also don’t get too arrogant with it.”

Lampard’s mood darkened further when Trent Alexander-Arnold whipped a signature free-kick around the wall and past Kepa Arrizabalaga to make it 2-0.

Reflecting on the incident, Lampard told Sky Sports: “For me, it wasn’t a foul from Kovacic, and there were a lot of things that weren’t going our way. But I’ve not got a problem with Jurgen Klopp. The way he’s managed this team has been fantastic.

“Fair play to Liverpool Football Club, they’ve won the league, but also don’t get too arrogant with it. That was my point, but it’s done. In match play, you can get emotional and that was it.”

In pictures: The face-off before the fireworks

The Chelsea manager was finally given something to smile about in added time in the first half when Olivier Giroud forced the ball home to make it 3-1 after Alisson could only parry Willian’s close-range shot into the air.

Lampard made a triple substitution and two had an immediate impact as Christian Pulisic’s low cross was side-footed home by Tammy Abraham, with Pulisic then roofing a shot to make it 4-3 as the party started early outside with fireworks going off behind the Kop.

“It was an extraordinary game,” Lampard added. “Even when you say they threatened to run away with it, I felt we were in it. I could feel that in the way we were playing.

“It was a turnover and a great strike. A non-foul and then another strike that goes into the top corner. On the third, it was terrible from us defending the corner.

“But other than that in match play, we were OK. The first goal gave us hope and the lads showed great character but they’re a fantastic team and we can’t afford to make those mistakes.

“Some of the stuff I saw tonight from our team was resilience and quality. At 4-3, if we didn’t concede the fifth, I felt like we were coming. But it wasn’t to be.

“You can never be happy in defeat, but when you see the quality of the first two Liverpool goals, you understand what this place is and why they’re so successful at the moment.

“We’re building towards that, and we’re going to have to suck this in tonight as it’s where we want to get to one day.”

Chelsea can secure Champions League football with a draw on the final day of the season against Wolves at Stamford Bridge given that third-placed United are facing Leicester in fifth at the King Power Stadium.

“It’s going to be huge. We know the situation,” continued Lampard. “It’s in our hands to get the right result against a very good Wolves team. We have to deal with the pressure of moments like this if we want to get to where we want to be.

“We’ll have to recover and then we’ll go on Sunday.”

Watch Chelsea vs Wolves live on Sky Sports Football on Sunday. Coverage starts at 3pm with kick off at 4pm.

Sunday July 26: The final day fixtures in the Premier League