Home World The Top 10 Superhero Scores of All Time 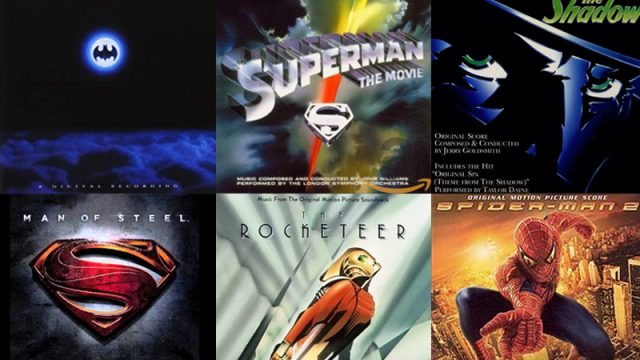 The Top 10 Superhero Scores of All Time

We live in a day and age where superhero films are a dime a dozen. It wasn’t always like that. Where Marvel more or less makes big-budget TV shows, Richard Donner, Sam Raimi and Tim Burton paved the way for superheroes with films like Superman: The Movie, Spider-Man and Batman. Sure, some of those films don’t hold up as well today, but, at the time, they were groundbreaking cinema.

Part of what made them so special was the music that served as the heroes’ identity. Honestly, can anyone think of Christopher Reeve’s Superman without humming John Williams’ iconic theme? Or look a Michael Keaton and not think about Danny Elfman’s bombastic score?

If you answered “Yes” to either of those questions, then this probably isn’t the list for you. All others, enjoy our list of The Top 10 Superhero Scores of All Time. Though, please note this is not a list of the best superhero themes, but the film’s score as a whole.

Feel free to share your lists in the comments below!

Those old enough to remember will remember their first experience with Batman in the movie theater: the Warner Bros. logo, fixed against a dark backdrop and accompanied by moody underscore, slowly fades away as the camera pans down into a dark crevice … the music grows louder and louder until the title “Batman” fills the screen amidst an enormous blast of choir — and then it hits. Trumpets. Drums. Soaring strings. Batman’s theme. As iconic as butter.

Tim Burton’s gothic take on the caped crusader required an appropriately dark score to drive home the action — and Danny Elfman brought it. Like, really brought it. So much so that — hot take! — his work remains the best thing about the film all these years later. Listen to the track Attack of the Batwing. You’re welcome.

Placing Man of Steel above John Williams’ iconic Superman theme could possibly qualify as treason. Except, Hans Zimmer’s work on Zack Snyder’s Superman flick is nothing short of extraordinary. That theme. Those drums. Part of what makes this soundtrack work so well is its simplistic nature. Have a listen to the track, “Flight,” or “Smallville Battle” if you need further proof of the composer’s genius — or, if you’re simply in need of a good adrenaline pump.

Yeah, John Williams’ instantly recognizable Superman theme deserves ranking amongst the all-time great compositions. Yet, some of the best music on the soundtrack comes early on during the Krypton and Smallville sequences where the maestro unleashes incredibly lush and sweeping secondary themes. What knocks Superman down a peg is the average (by Williams’ standards) love theme and that goofy Lex Luthor march that lacks any ounce of menace. Still, the score stands as a stunning accomplishment in the realm of film scores.

James Horner’s music for Joe Johnston’s underappreciated superhero gem offers enough razzle dazzle to compete with the greats. A terrific main theme for the hooded avenger makes its appearance via a quiet piano melody but continues to evolve and grow as the film progresses; and ultimately reaches its apex during the climactic battle at Griffith Observatory. Still, the best track on the album (including the expanded release) remains “The Flying Circus,” which takes excitement to a whole new level.

With Batman Begins, Hans Zimmer and James Newton Howard teamed up to deliver an emotional resonant, atmospheric score that many in the film community embraced. And then The Dark Knight arrived and blew it away. The Joker theme, a weird but perfect blend of noise, guitars and percussion, immediately catapults the listener into Christopher Nolan’s chaos-fueled Gotham, while tracks such as “Like a Dog Chasing Cars” brilliantly sum up the battle taking place between the Clown Prince of Crime and the Batman. Simple, brooding, and absolutely phenomenal.

Before Marvel saturated theaters with an endless batch of superhero flicks, Sam Raimi launched the Spider-Man franchise with Tobey Maguire in the title role. While the trilogy would ultimately flame out with the third installment, not many superhero flicks have surpassed Spider-Man 2 in terms of quality, action and heart. Not to mention another terrific score from Danny Elfman, who built on the themes established in the original film and made them even better. Yeah, yeah. There was behind-the-scenes issues regarding Christopher Young, who Raimi chose to write some of the film’s more bombastic cues (including that amazing subway train battle between Doc Ock and Spidey), much to the chagrin of Elfman, but Spider-Man 2 remains one of the better superhero scores to come along.

It’s too bad that Jerry Goldsmith’s only forays into the superhero genre were Supergirl and The Shadow. Both films suck, but the composer brought A+ talent to the proceedings and crafted memorable work. Of the two, The Shadow stands out a tad more thanks to its gothic themes and creativity.

The third Batman film on the list, Shirley Walker’s score for the animated film, Batman: Mask of the Phantasm, features larger-than-life choir, bombastic horns, and the same high quality the composer brought to WB’s incredible Batman: The Animated Series (not to mention the superb Memoirs of an Invisible Man). Walker’s not messing around. Right from the get-go she presents Batman’s theme via Russian choir and pounding drums; and the big finale, during which Batman takes on the Joker, feels like something out of an opera. It’s amazing!

Batman: Mask Of The Phantasm

In 2004, audiences were introduced to The Incredibles, Pixar’s superhero comedy that blended world-ending scenarios with common family issues for a supremely entertaining action feature. Along for the ride was then-unknown composer Michael Giacchino, who made the abrupt jump from the world of videos games to big screen fare with tremendous results. His theme for The Incredibles leans more on a James Bond aesthetic, but is no less fitting for our superhero clan.

Alan Silvestri’s epic tends to borrow some of his more, ah, oft-used compositions, which leaves Avengers: Infinity War sounding a little too much like The Mummy Returns or G.I. Joe at times. And yet, the Avengers theme is so damned good it hardly matters. Especially with tracks like “The Forge” where Silvestri takes the orchestra to a completely different level. It’s thrilling stuff.