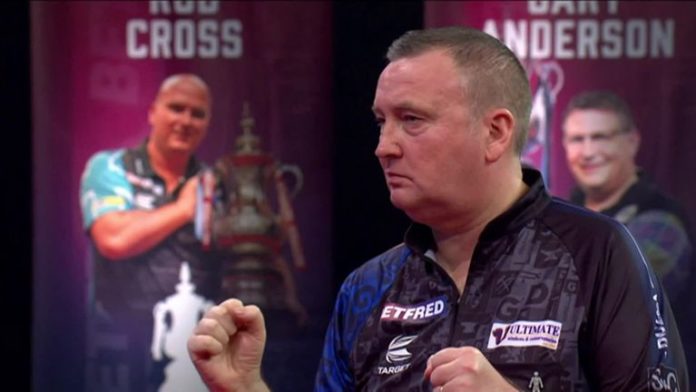 Glen Durrant sent world champion Peter Wright packing at the World Matchplay – meaning every member of the world’s top four has now been knocked out before the quarter-final stage.

It was fitting that in a tournament of shocks, three of the lowest-ranked players won their matches on Wednesday evening, but Durrant’s 11-8 victory over Wright had added significance.

A tournament that has already lost Michael van Gerwen, Gerwyn Price and Rob Cross delivered another night of shocks as Durrant stormed back from 4-1 down to beat ‘Snakebite’ and set up a showdown with Vincent van der Voort for a place in the semi-finals.

‘Duzza’ finally has his moment against Wright

Three-time BDO world champion Durrant had vowed not to show Wright as much respect as he had in losing each of his last five matches to his great friend – and he was as good as his word.

‘Duzza’ took advantage of 22 missed darts at double from Wright, who crashed out before the last eight for the first time since 2014 after throwing away the early initiative.

‘Snakebite’ stormed into an early 4-1 lead, befitting his status as the highest-ranked player left in the tournament, but Durrant is one of the grittiest players around and showed huge character and clutch-finishing to storm all five legs of the second session.

With Wright’s doubling going begging, Duzza was on hand to take out six legs on the bounce, including finishes of 108 and 104 that helped him into a 6-4 advantage.

Wright, runner-up in 2017, launched his comeback when Durrant missed four darts for an 8-4 lead and was punished when Snakebite reeled off three legs in succession to draw level and then pinned double four for an 8-7 lead.

But Duzza dug deep and claimed four of the next five legs for a crucial win that leaves him on course to match or better his semi-final debut in Blackpool last year.

‘SuperChin’ the latest big name to crash out

Vincent van der Voort defied his status as the lowest-ranked player left in the competition to send another member of the world’s top 10 packing with an 11-5 win over Daryl Gurney.

Van der Voort had not won a match at the tournament since 2011 before this week, but he made it two wins in the space of three days with a dominant display that saw him average just short of 100 and hit more than 50 per cent of his doubles.

The Dutchman swept the opening five legs – a 12-dart break of throw kicking the match off in style – and he never looked back, taking full advantage of some early missed doubles from Gurney.

A first 180 of the match helped Gurney get on the board and, when he followed up with a second leg, he looked set to make inroads into the Dutchman’s advantage. But it was not to be, as Van der Voort reeled off the next three and then powered in a fifth maximum to move within one leg of the match.

At the point of no return, Gurney punished a missed Van der Voort dart for the match to claim a third leg and he took out the next two as another chance for the match went begging.

However, Van der Voort kept his cool and mopped up 94 for a classy finish to a classy performance and match his best performance in the tournament.

‘Dreammaker’ Dimitri Van den Bergh continued a dream debut at the Matchplay, winning six of the last seven legs to triumph 11-9 and leave Joe Cullen ruing a missed opportunity on the big stage.

Cullen reached the last eight of this competition two years ago but there was to be no repeat as Van den Bergh produced an astonishing four 100+ finishes.

Two-time World Youth champion Van den Bergh piled in finishes of 118 and 105 in the opening exchanges, while Cullen’s 112 was equally impressive as he moved into an early lead.

‘The Rock Star’ opened up a three-leg lead. But each time Van den Bergh pulled himself back within touching distance, a superb 138 finish the highlight when he trailed 5-2.

When the Belgian missed five darts to level at 6-6, Cullen pulled clear again, a dazzling 11-dart break of throw enough to lead 8-5. That was the cue for Van den Bergh’s stunning four-leg burst that included another huge finish.

Cullen’s riposte was instant, a 118 checkout tied the game at 9-9, but Van den Bergh kept his cool and claimed the next two and a date with Adrian Lewis in the quarter-finals.

The two-time world champion, a Matchplay runner-up in 2013, averaged almost 100 on his way to victory against a dogged Noppert who could not keep pace with his opponent down the closing legs.

Noppert had defied a 12-point difference to lead 3-2 at the first break and pinned a nerveless 107 finish to maintain his advantage.

Lewis looked to have stolen a march when he claimed a superb 120 finish, his second three-figure out-shot of the contest, for a 6-5 lead, but Noppert was undaunted, hitting straight back to level again.

A fired-up Lewis ploughed on and, with cries of ‘come-on’ echoing around the arena, he broke the Noppert throw again and this time consolidated to move within three of the last eight, from where he dropped just one more leg on his way to a fine victory.