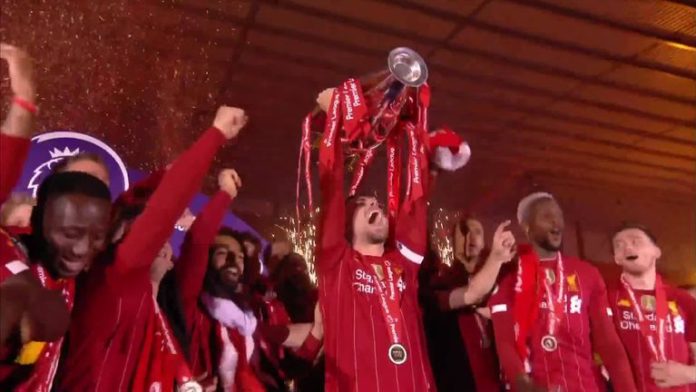 Liverpool lifted the Premier League trophy for the first time amid fireworks in a special ceremony on the Kop at Anfield, following their thrilling 5-3 win over Chelsea.

The champions’ captain Jordan Henderson was handed the silverware by Liverpool legend Sir Kenny Dalglish as the Reds celebrated their first English title in 30 years in style, despite no fans being allowed in the stadium.

Liverpool had clinched the title with seven games to spare on June 25, when Chelsea beat second-placed Manchester City, but had to wait for the conclusion of their final home league game of the season to finally get their hands on the silverware.

The Reds kicked off the party early with a remarkable victory over Frank Lampard’s side to ensure they finish the season unbeaten at Anfield and make it 59 home league games without defeat.

After the match, Dalglish, who was manager the last time Liverpool were champions in 1989/90 and signed Henderson for Liverpool from Sunderland during his second spell in charge in 2011, passed over the trophy to the injured skipper.

With supporters absent due to the coronavirus restrictions, Liverpool had built a stage in their iconic stand for the presentation, while fans gathered and celebrated outside of Anfield.

James Milner was the only player in the Liverpool squad who had won the Premier League before and, ahead of the match with Chelsea, Reds boss Jurgen Klopp had encouraged his players, staff and the club’s supporters to treasure the moment.

“On Wednesday, we will cherish it,” he said. “In this moment, we have to stop for a second, look at it, be really happy about it, enjoy it together with our fans all over the world, in heart and mind, and make it the most special moments of our life so far.

“Being here champions is the most special thing you can imagine. We all have to make it a special moment inside and keep it forever inside.”

Liverpool finish their 2019/20 campaign at Newcastle on Sunday at 4pm.

Liverpool are back at the summit of English football after 30 long years of frustration and strife. While there have been many highs – including two Champions League triumphs – during that period, there have also been some spectacular lows.

Take a trip down memory lane, from Kenny and Rafa to Gerrard and Klopp…

What happened to Liverpool’s 1989/90 title winners?

Liverpool’s 2-1 win over Queens Park Rangers at Anfield on April 28 1990 confirmed the club’s 18th league title, with Kenny Dalglish’s side expected to continue challenging at the top for years to come.

However, none of the 13 players who featured for Liverpool that day would ever win the title again.

We look at what Liverpool’s last title winners did next…

Here’s how he transformed the team from Premier League also-rans into champions of England once more.