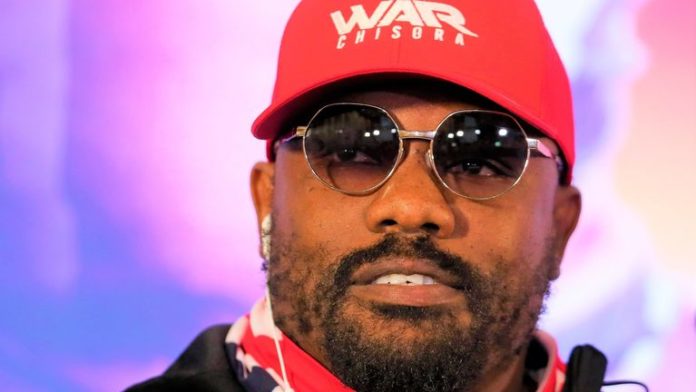 “We haven’t spoken about opponents or timing. It comes down to when he is available”

Derek Chisora is still expected to face Oleksandr Usyk but Bellator MMA “would love to have him”, the organisation’s president has said.

Chisora has been training alongside Bellator star Michael ‘Venom’ Page and has teased a switch to mixed martial arts.

The #Bellator242 prelims kick off on our YouTube channel at 1:45am BST before the main card goes down LIVE on @SkySports at 3am BST 🇬🇧 pic.twitter.com/fEwEyvrZ5P

“We’d love to have him. If he has time in his schedule to compete in MMA, we’d love to put him in there and test him out.

“Depending on his schedule we’d love to get him into our rotation, if time permits.

“He has so many boxing fights but it is still a different experience to fight with little gloves, and in a cage would be an adjustment.

“I picture a fun opponent for him to compete with.

“We haven’t spoken about opponents or timing. It comes down to when he is available.

“He brings a lot to the table.

“I love when someone who comes from a different sport really puts the time in to practise martial arts. When you go to a gym like Shootfighters in London, it means you are serious. This isn’t a gimmick.”

Bellator also hope to stage former rugby union player James Haskell’s MMA debut and Coker said: “I love when athletes at the highest level come in because they realise this is a tough sport that takes a lot of dedication and time. But they have such great athletic ability that they can make that crossover.”

Chisora is awaiting a new date and location for his heavyweight fight with Usyk, who is the WBO mandatory challenger to Anthony Joshua’s title.

Usyk posted footage of himself calling Chisora’s name, while jogging on the beach, to social media.

MMA star Page previously told Sky Sports that Chisora will prioritise boxing: “People know his personality. He is getting impatient. I’m sure he’ll get distracted again into what he does best.

“Where he is in the boxing world? It’s better for him to stay in boxing, jump the last few hurdles and be known as one of the great British champions.

“But he is around us a lot. We train together a lot, do our fitness together. He has jumped into a couple of sessions with us, to see what it’s about.

“But I see where his passion is. It is in boxing. From what I see, his focus should be on boxing.”

Chisora told Sky Sports about meeting the Bellator president: “I’ve told [him] give me your best heavyweight and I will knock his lights out!

“I’m hungry, excited, some MMA fighters come to boxing so I want to be the one that goes to MMA, I want to knock some dudes out for fun.”

Watch Bellator 242 from 3am this Saturday on Sky Sports Action.