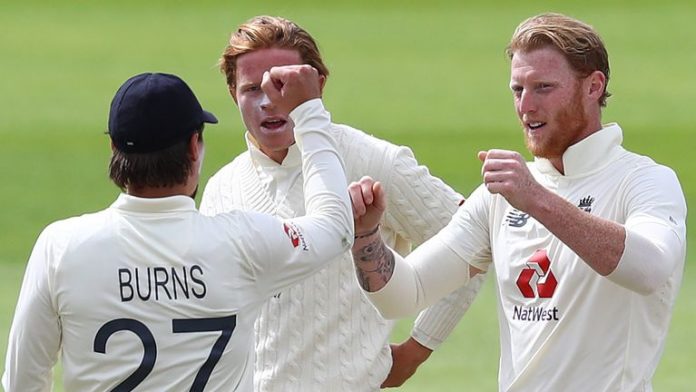 “Sibley and Stokes put on 260 and I don’t think I’ve ever waited that long to bat before! If I’m honest, I felt pretty knackered by the time I walked to the crease because I’d been watching them for over a day”

Ollie Pope blogs on the difficulties that come with the added scrutiny of being an international cricketer, Jofra Archer’s return to the squad and the lesson he took away from the second Test…

Jofra Archer has been bowling seriously well in the nets, with pace and accuracy, and it’s great to have him back with the squad.

As someone who has played a similar number of Tests to Jofra, I can relate to how difficult it can be to adapt to the added scrutiny that comes with being an international cricketer.

Cricket is a levelling sport and Test cricket especially so.

As a batsman you can easily get caught up in what people are saying. I’ve missed out in this series so far after a successful time in South Africa, so it’s about trying to stay as level as possible while you’re in the spotlight for whatever reason.

If you watch some of the best batters, part of their success is based on how they deal with those good and the bad days and how they use the bad days to spur themselves on.

The second Test provided me with a good lesson. Dom Sibley and Ben Stokes deserve massive credit for their centuries which really set the game up for us.

Sibley showed just how mentally strong he is – batting at the same tempo pretty much throughout his innings – while Stokes, in his two contrasting knocks, demonstrated his ability to bat in pretty much any given scenario.

Together they put on 260 and I don’t think I’ve ever waited that long to bat before! If I’m honest, I felt pretty knackered by the time I walked to the crease because I’d been watching them for over a day.

When I’m next into bat I like watching the game pretty closely so maybe next time I might watch for an hour and then go and have a coffee around the back and have a chat with a few of the lads, to help rest the mind.

I didn’t find it easy to be honest but it’s part of batting and part of cricket – so next time it comes around I’ll probably do things a little differently.

But it was a joy to watch the pair of them, especially as they batted in some really tough conditions against a strong attack with the ball nipping about throughout.

Our bowling unit was immense after Saturday’s washout and it was a special moment to take the catch to seal victory.

If I’m honest, apart from fielding at short leg for Surrey a little bit I haven’t done a massive amount of work in that position.

Since fielding there in New Zealand and then South Africa this winter, I’ve learnt that it’s definitely somewhere where you need to feel confident.

You’ve got to accept that you’re in a high-risk position and that you might take a few blows, but you’ve also got to try and enjoy it and try to create as many chances as you can.

Back when I started out I probably wouldn’t have even moved for that catch – it would probably have gone over my left side for a single to deep-square leg – but because I was busy it stuck.

You can’t take a Test win for granted because there is a lot of hard work goes into those five days so it was a great feeling to level the series and set up a decider.

You’ve got to celebrate your wins but being in a bio-secure environment meant things were a bit different.

Instead of getting the team bus back to the hotel it was a case of strolling back across the pitch to our rooms. When you wake up the next morning and you’re still with the lads it was a bit weird! It feels like you’re on tour somewhere.

But one thing doesn’t change – it’s obviously a lot better feeling when you are winning, wherever you are, and now we want to go on and clinch the series.

It can be hard to switch off when your view is the cricket pitch you’ll be playing on in a few days, but we enjoyed a day off on Tuesday – everybody was pretty knackered after five days so it was a case of playing a bit of X-Box and letting the body recover – before getting back to it on Wednesday.

The weather was frustrating – it started raining halfway through our net session. The first group had a hit outdoors but then we had to go indoors and do a bit of sidearm practice, while a few lads hopped on the bowling machine. But that’s just part of playing cricket in England.

During this Test we’ll be doing our bit to promote The Ruth Strauss Foundation.

Old Trafford is pretty red as it is but the ground is taking shape for #RedforRuth, with red boundary ropes going in, and we’re all right behind what is a fantastic charity doing great work.

During lockdown a lot of the lads got involved in the 26-tap challenge – something I completed after being nominated by Alec Stewart, but not with a cricket bat!

Cricket has also returned to The Oval this week, with the start of the London Cup, and they’ve been getting a bit of a crowd in too.

We’ve got used to playing behind-closed-doors now but it will be a great lift to have the support of the Barmy Army and all our fans back, hopefully very soon.

Watch Ollie in action during the third and final Test of the #raisethebat Test series between England and West Indies live on Sky Sports Cricket from 10.30am on Friday, with over-by-over commentary and in-play clips across Sky’s digital platforms.

To find out more about the Ruth Strauss Foundation and to donate please visit: ruthstraussfoundation.com