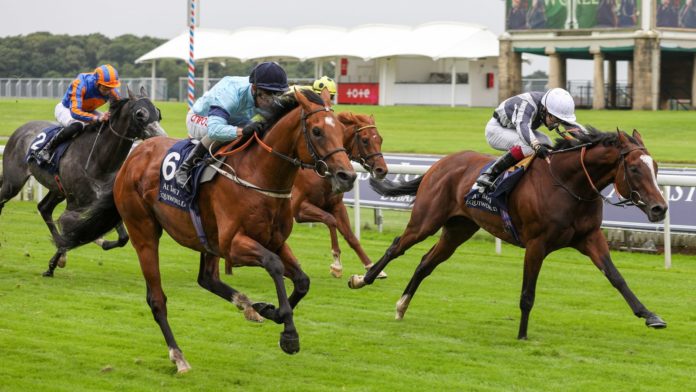 A return to York for next month’s Ebor meeting is a possibility for Dante Stakes hero Thunderous.

Mark Johnston’s colt was unbeaten in three starts as a juvenile, but found Volkan Star a shade too good on his seasonal bow at Newmarket in June.

However, he bounced right back to winning form in the Group Two Dante Stakes, run on a rearranged date earlier this month, beating Highest Ground a neck in a thrilling finish.

Thunderous could now move up to 12 furlongs for the Sky Bet Great Voltigeur on August 19, with the Group One Juddmonte International on the same day not completely ruled out, while a trip to Deauville on August 15 is another idea in the mix.

Harry Herbert, managing director of owners Highclere Thoroughbred Racing, said: “I’ve talked to Mark, and it’s just a very strange year to try to map out a plan for a horse like this.

“It’s possible we could look at a race in France for him – the Guillaume d’Ornano – or the Voltigeur at York.

“He’s a Group Two winner, so he would have to carry a small penalty in both races, but there’s not very much else to look at right now. There’s the Grand Prix de Paris (in September), although I understand the Derby winner may go there, so we will consider all the possibilities.

“I suppose we would have to look at a race like the International and take a view, but we’ll really be guided by Mark and Charlie and how the horse is going at home. We’ll look at all the options for him.”

Switching up in trip for the Voltigeur would not worry Herbert, who has full confidence in the Night Of Thunder colt’s ability to see out the distance.

He added: “He’s one of those horses that looks like he wants to be going further – it looks like it would suit him, and I’m sure he would see it out.

“He always seems to do enough – he has this fantastic attitude.

“Once we get into August, we’ll have to put a plan into place, but he has been brilliantly