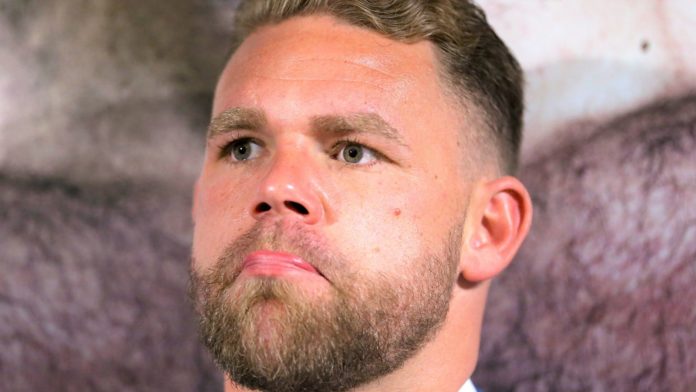 Billy Joe Saunders has been fined £15,000 by the British Boxing Board of Control for posting a social media video which appeared to condone domestic violence.

The WBO super-middleweight champion filmed himself working out on a punch bag in a barn, advising men on how to hit their female partners if tempers flared during the ongoing coronavirus pandemic, which resulted in a fierce backlash on social media.

Promoter Eddie Hearn previously said he was “appalled” by the actions of the WBO super-middleweight champion.

“It was so idiotic,” Hearn told Talksport. “It was so frustrating because I know Billy well. He’s a really good kid, with a really good heart. He does a lot for the community, he does a lot for charity, but every now and again he does the most stupid things. The world has changed and realised about all kinds of different things, about how you need to treat people.

“It’s one step forward, four steps back with Billy Joe Saunders and it is frustrating.

“He’s got this mentality where it’s me against the world. Sometimes you can have a conversation with him and say ‘Bill, what are you doing?’ And sometimes that can make it worse. I leave him alone now and when I talk to him, I will be telling him, you’re a prat, what are you doing?

“I can only tell you, he does have a good heart, he didn’t mean anything in the video, but you just can’t do it, especially when you’re in your position. It’s unacceptable for Joe Bloggs down the street to do it. It’s much more unacceptable for a world champion boxer to be doing it.

Saunders reacted in March by telling Talksport: “I can only take it back and apologise. I will be donating £25,000 to support the domestic violence charity. It was a silly thing to do, but it has been done and I can’t take it back.

“It wasn’t meant to be suggesting ‘go and hit your wife and your loved ones’.

“I am getting a lot of hate mail wishing me dead, wishing my family and my kids dead.

“I am who I am, I am not going to say I will never make another mistake in my life. I don’t intentionally mean to make these mistakes, I didn’t have a very good education.

“I am not intentionally causing the public any harm at all. I only put it out because I thought it was a laugh, clearly it wasn’t.”