Home Sport Mount: Tammy ‘could have chance’ as an NBA player 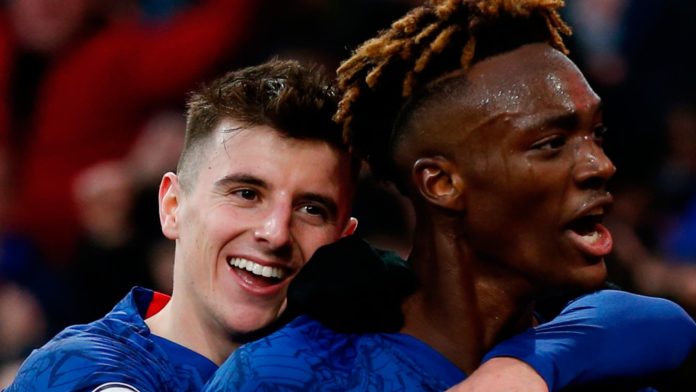 Chelsea midfielder Mason Mount says his team-mate Tammy Abraham “could have a chance” as an NBA player.

Mount joined Sky Sports NBA via video conference and was asked to pick a footballer with the potential to hoop in the NBA and a baller with the skills to make it in the Premier League.

“Which footballers could make it in the NBA? My team-mate Tammy Abraham could have a chance,” he said. “He is tall and into his basketball so I think he could maybe do OK.

“An NBA player who could be a footballer? That’s tough. (Atlanta Hawks guard) Trae Young, maybe. I am a big fan of the younger players coming through and I watch them play. He is small, tricky and has good ability. Yeah, maybe Trae Young.”

The NBA season is ready to resume on July 30 at the Disney’s Wide World of Sports complex in central Florida with no fans present. Mount, who has appeared in all seven of Chelsea’s games after the Premier League restarted behind closed doors in June, is better placed than most to advise NBA players how to cope with such alien conditions.

One feature of Premier League games since the restart has been the presence of drinks breaks midway through each half, a move that echoes the use of timeouts in the NBA.

“It has been a good help,” Mount said. “That three-minute break allows you to have a drink, analyse the game and speak to the manager and see what we can do better. They have that in the NBA with (timeouts). I think it can be introduced (more regularly) in football and going forward may be something they bring in. It definitely helps.”

Earlier this year, Mount received an NBA-related boost of his own when Cleveland Cavaliers big man Larry Nance Jr named the 21-year-old midfielder as his favourite player, saying he was “so creative”.

“(Hart and Nance) have both been to Chelsea games. I have seen them both after our matches,” he said. “It’s good to see people from a different athletic background coming to watch our games. Obviously, we watch their games as well so we have that link. I speak to Josh and Larry quite a bit and they are good guys. I get on really well with them.”

Who is Mount backing to win the NBA title? “There are some strong teams, especially the Lakers. They have had a good run and have been doing very well with LeBron. They are up there as that strong force that everyone will find tough to beat. I think the Lakers have got a good chance of winning the championship,” he said.

“Giannis versus LeBron is a Finals everyone wants to see. The Bucks vs the Lakers is a match-up that could maybe happen.”