Home Culture One Direction’s most iconic moments, as the band celebrates 10-year anniversary 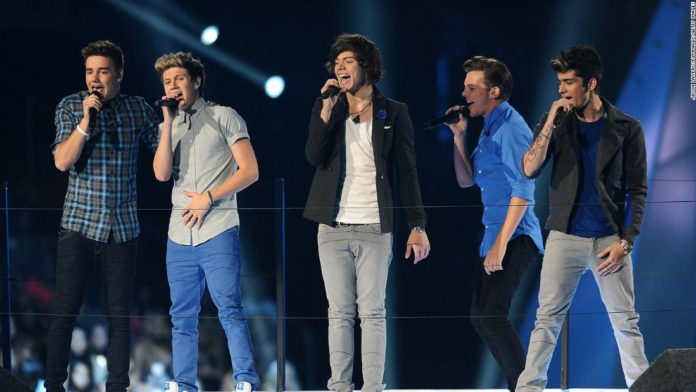 Earlier this month, the much-loved boy band revealed that a new website would launch on July 23, with a celebration video made for their fans.
New content, including interactive playlists, are expected, as well as reformatted EPs featuring B-sides and rare songs, remixes, live recordings and acoustic versions of tracks.
We take a look back at some of the band’s most iconic moments.

A band is born

The group got its start in 2010 on “The X Factor” after Niall Horan, Zayn Malik, Liam Payne, Harry Styles and Louis Tomlinson all auditioned.
Individually, they didn’t make the cut, but they were formed into a boy band, which is now one of the most successful in history.
Although the band didn’t go on to win the talent contest, their performances — including a rendition of Natalie Imbruglia’s “Torn” — impressed judges. Simon Cowell signed the band to his label, and the rest, as they say, is history.

One Direction, otherwise known as 1D, went on to huge success in the UK, with four UK number one singles, 14 UK top 10s, and a spot on Billboard Hot 100 chart.
The group became the first group to have its first four albums debut at No. 1 on the Billboard 200 — and even filmed a music video with the UK’s Prime Minister at the time, David Cameron, for a charity single.

A cabinet full of awards and a calendar full of performances

The group racked up an impressive list of accolades, including MTV Europe Music Awards, MTV Video Music Awards (VMA), People’s Choice and Teen Choice Awards.
The band embarked on a whirlwind of tours, red carpet appearances and performances. They even took to the stage for the closing ceremony of the London 2012 Olympic Games.

Despite announcing a hiatus five years ago, One Direction still has a devoted fan base — the group’s YouTube channel has more than 31 million subscribers and more than 10 billion views, and the combined reach of the band’s official social media pages is 85.9 million (that includes Facebook, Twitter and Instagram).
The band has sold more than 200 million records worldwide and has had more than 21 billion streams across all platforms, according to a release from Legacy Recordings.

Five became four in 2015, when Malik announced he was leaving the group — plunging the future of the band into jeopardy.

The group separates, and fans go into mourning

That same year, hearts shattered around the world when the remaining band members announced they were going their separate ways. All five members have gone on to release music projects.
Some of the group have branched out from music — Styles tried his hand at acting, taking a part in Christopher Nolan’s “Dunkirk,” Malik released an autobiography, while Tomlinson took a gig as a judge for the US version of “The X Factor.”
Three out of five of the band are fathers, or expecting — Tomlinson and Payne both welcomed sons, while Malik is expecting a child with model Gigi Hadid.
Directioners might still be waiting for that long-rumored reunion, but hopefully Thursday’s offering will help quench their thirst until the guys are more forthcoming with their plans.