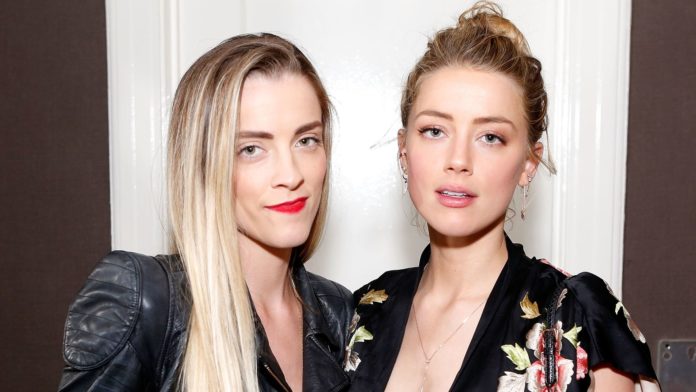 Amber Heard’s sister has claimed she witnessed Johnny Depp punching the actress and says she “felt sick” when she learned they were getting married.

Whitney Henriquez said in a witness statement that she “begged” her older sister not to go through with the wedding, telling her that Depp “putting a ring on her finger was not going to stop him hitting her”.

She gave evidence on day 13 of the biggest English libel trial of the 21st century, with Depp, 57, suing NGN, the publishers of The Sun, in a case being heard at the High Court in London.

Ms Henriquez appeared in person in the witness box on Thursday afternoon following Heard‘s last few hours of giving evidence earlier in the morning – during which the actress gave more details about an argument in Australia in 2015 and the court was told about texts she sent to her mother about Depp.

Key moments from day 13 in court

As Ms Henriquez gave evidence in the afternoon, the court was told details of her witness statement.

In it, she said that when she first met Depp he seemed “very sweet” and that they eventually became close, “like brother and sister”. However, she also said his relationship with Heard was “tumultuous from the start”.

Ms Henriquez alleged the actor could “insult her and say he loved her in the same sentence, with equal amounts of passion. I remember him often saying ‘f****** ugly c***, you fat whore… but god I f****** love you’ – and things like this”.

She claimed that “early on” she “began to notice signs of physical abuse, like bruises or cuts or burns on [Heard’s] arm”.

Ms Henriquez said when Heard announced their engagement in September 2013, “I felt sick about it”.

“I told her it was a bad idea, begged her not to go through with it and said that she should end it because it wasn’t going to get better.

Ms Henriquez told the court she witnessed Depp being violent once, in March 2015 – an alleged incident which happened on and near to the staircase of the actor’s penthouse in LA.

“Johnny reached out to shove me out of the way to lunge at Amber – reaching out to try hit Amber – and instead struck me, hitting me in the arm,” she said in her statement.

“Amber suddenly lurched forward and hit him and said, ‘Don’t hit my sister’. I didn’t see exactly how Amber hit him but it didn’t seem especially hard; it was just enough for him to lose momentum.

“She was just trying to protect me and I think it probably stopped me from being pushed down the stairs. There was a struggle with me stuck in the middle of it, and he really went for Amber.

“Somehow I was pushed out of the way so I wasn’t between them, but I was standing right there next to them when Johnny grabbed her by the hair with one hand and I saw him punch her really hard in the head with his other hand multiple times.”

The court also heard about an alleged episode in March 2013 – the so-called “Disco Bloodbath” incident, due to a subsequent reference to a book in a text exchange – when Heard says Depp tried to burn a painting by her ex-wife Tasya van Ree when she refused to take it down from their bedroom wall.

There has been some confusion as to the date this occurred, with Heard changing her initial statement earlier this month to amend the date she first gave, 8 March 2013, to later that same month on 22 March.

Ms Henriquez said she had also been mistaken in her statement, and had mixed up the painting that was damaged, originally saying the signature had been scratched over to read “Tasya van Pee”. She said she later realised this was a separate incident the year before.

A photo was shown to Ms Henriquez showing her with Depp, Heard and The Rolling Stones guitarist Keith Richards. Depp’s lawyer, Eleanor Laws QC, said the photo was taken on 23 March 2013 and showed no injury to Heard’s face.

Ms Henriquez disagreed and said when she looks at the photo she sees “make-up and a split lip”.

There was also discussion over a trip to Coachella Festival, which occurred shortly after Heard’s 30th birthday in 2016, when another alleged incident between Depp and Heard took place.

Earlier in the case the court was told by Depp’s security guard Starling Jenkins that he had seen Heard “being sick in a car park” at the event. Ms Henriquez said the person he saw being sick was her, and it was because she was pregnant at the time.

As Heard gave evidence in the morning session, Sasha Wass QC, representing NGN, gave details of text messages from the actress to her mother, Paige, sent during her relationship with Depp.

“It’s terrible, mum. I don’t know what to do,” one read, while in another she described him as a “madman”, and another said: “He’s nuts, mum. Violent and crazy. I’m heartbroken that this is who I love.”

In another text, Heard said Depp was “not being violent with me” but just “raging in general”. She told the court she was not being truthful in this text.

Heard then told the court: “I was so in love with Johnny at that time. We had had a wonderful year together where he was sober and clean and that is how I got to know him.

“And Johnny, when he was like that, (is) generous, loving, he is a remarkable man when he is like that.

“I loved him and I didn’t want to lose that… the other side of him was a monster, but I always held out hope that he would get clean and sober.”

Proceedings then moved on to the much-discussed incident in Australia, when Heard alleges Depp was taking MDMA and drinking heavily.

In court the previous day, Heard gave her account of part of the argument, accusing the actor of throwing bottles “like grenades”.

On Thursday, Ms Wass asked her about the damage to the house in which they were staying – which included broken windows, graffiti on mirrors and blood and paint on the walls and floors.

Asked how much of it she was responsible for, Heard said she only broke one bottle.

Giving her account of the damage, the actress told the court: “When I first opened the door that last morning, there was what appears to be mashed potatoes and gravy or something rubbed all over the door… I remember there was a bird, which scared me to death… I guess it had flown in through a broken window.”

Heard continued: “I started seeing all this blood on the carpet… which I thought was (from) my feet, but there was drops of it. There was blood everywhere.

“There was paint, what I thought was paint because it was a brownish colour, on the walls and then it started to become clear to me that they were letters or messages, words. It was heavy at first and then it kind of faded into a, like, milky-brown colour.”

She continued: “I found raw meat, at first I didn’t know what it was, on the floor… not just on the floor, I continued to find it… that day, hidden in various places.

“He had taken my nightgown and ripped it into shreds. He wrapped pieces of food [in it].”

Heard said that downstairs, Depp was playing “death metal, blasting really loud” and she could see “tonnes of broken glass”, and a ping pong table was “broken and on the ground”.

Depp is suing NGN and The Sun’s executive editor Dan Wootton over an article published in April 2018, with the headline: “Gone Potty: How can JK Rowling be ‘genuinely happy’ casting wife beater Johnny Depp in the new Fantastic Beasts film?”

Heard is NGN’s witness; the publisher is defending the article as true.