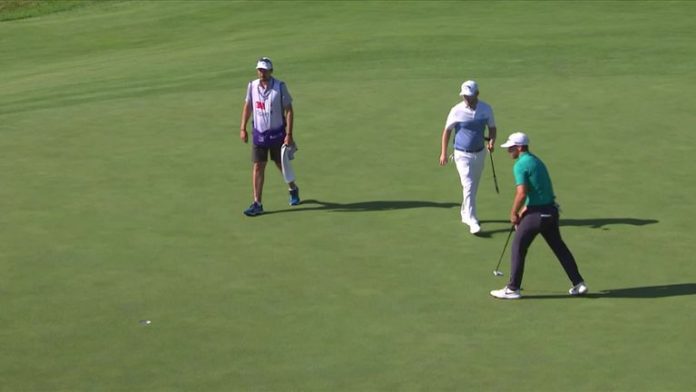 Live coverage from the second round of the 3M Open begins at 12.45pm on Sky Sports Golf, before switching to the red button at 1.30pm

Tony Finau and defending champion Matthew Wolff both made strong starts to the 3M Open, as Richy Werenski set the early pace in Minnesota.

Finau, who led at the Memorial Tournament last week before shooting 73-78 over the weekend, posted a six-under 65 during the opening round at TPC Twin Cities to equal the lowest score of the morning wave.

Wolff matched Finau’s total to get within two of the lead, as Werenski mixed nine birdies with a sole bogey to card a round-of-the-day 63 and give himself a one-shot lead over Michael Thompson.

Playing alongside Dustin Johnson – who withdrew after an opening-round 78 due to a back injury – Finau made close-range birdies at the 12th and 16th before starting his second nine with four birdies in a six-hole stretch from the first.

Finau failed to get up and down from just off the seventh but cancelled out his bogey by rolling in from 12 feet at the next, as Nick Watney birdied three of his last four holes to also get to six under alongside Ryan Moore and China’s Xinjun Zhang.

Wolff went out in the afternoon and made the perfect start with a five-foot birdie at the first, before bouncing back from a bogey at the next to post three straight gains from the fifth.

Last year’s winner dropped a shot at the ninth but made amends with back-to-back birdies at the 12th, with Wolff converting from 12 feet at the 16th and pick up a shot at the last to jump into the share of third.

Max Homa is also two off the pace, while Bo Van Pelt is in the group a further shot back after firing a hole-in-one at the par three eighth on his way to an opening-round 66.

Johnson, the highest-ranked player in the field, struck four balls into the water in the space of two holes, with a seven-over 78 leaving him bottom of the leaderboard when he decided to withdraw.

Watch the 3M Open throughout the week live on Sky Sports. Live coverage continues on Friday with Featured Groups from 12.45pm on Sky Sports Golf, before switching to the red button at 1.30pm.