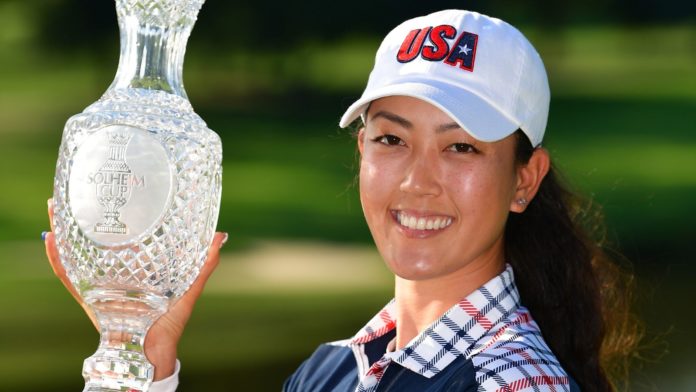 Wie West joins Angela Stanford in Hurst’s backroom staff as the USA attempt to regain the trophy, following their 14.5-13.5 defeat in last year’s contest at Gleneagles.

Latest headlines ahead of the 2021 Solheim Cup.

The 30-year-old has made five Solheim Cup appearances, featuring in every American team between her debut in 2009 – where she finished unbeaten in her four matches – and Team USA’s winning 2017 side.

“Naming Michelle as an assistant captain was an incredibly easy decision for me,” Hurst said. “She reached out to see if she could be involved with the team and I quickly knew that I wanted her as one of my assistants.

“She’s out there playing with the younger players, and since I’ve been off the Tour for a while, that’s a crucial asset for me to have, first with Angela and now with Michelle.”

The five-time LPGA Tour winner has played a limited schedule over the past two seasons due to a wrist injury, with Wie West yet to commit to a playing return after giving birth to her first child in June.

“When I heard that Pat had been named the captain for Team USA, I immediately knew that I had to be part of her team,” said Wie West.

“Pat was my POD leader when we played in Germany and Iowa and I learned so much from her leadership and friendship. Those weeks were great opportunities to learn from one of the best players and coaches I know, and to work alongside her is going to be an amazing experience.”