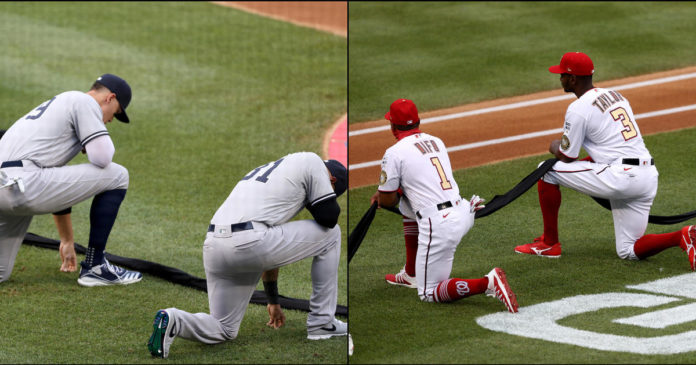 Ahead of Dr. Anthony Fauci’s opening pitch at Major League Baseball’s season opener between the Washington Nationals and New York Yankees, players kneeled during a moment of silence on Thursday night. A video clip also played during the pre-game ceremony that featured players such as Aaron Judge and Howie Kendrick, as well as audio of a speech by Morgan Freeman that touched upon racial inequality.

“Equality and unity cannot be until there is empathy,” Freeman said in the video, which was shown on the jumbotron at Nationals Park. “Today we stand as men from 25 nations on 6 continents. Today, we are one.”

Players were also seen holding a black fabric that spanned both foul lines in a nod to the ongoing protests across the country.

During batting practice, players were seen wearing T-shirts in support of Black Lives Matter. The letters “BLM” were also seen stenciled into the back of the pitcher’s mound below the MLB logo.

Players stood during a pre-taped rendition of the national anthem. The stadium was empty because of the coronavirus pandemic.

Fauci, the top infectious disease expert in the U.S., had been invited to throw the opening pitch and took the mound Thursday night wearing a red Nationals baseball cap and face mask. His throw went wide left of home plate and bounced past Washington player Sean Doolittle.

The Yankees eventually won the game, which ended early due to rain.

Hours later on Thursday night, the Los Angeles Dodgers and San Francisco Giants all kneeled before the game began. Some, including multiple Giants players and the Dodgers’ Mookie Betts, continued to kneel during the national anthem.