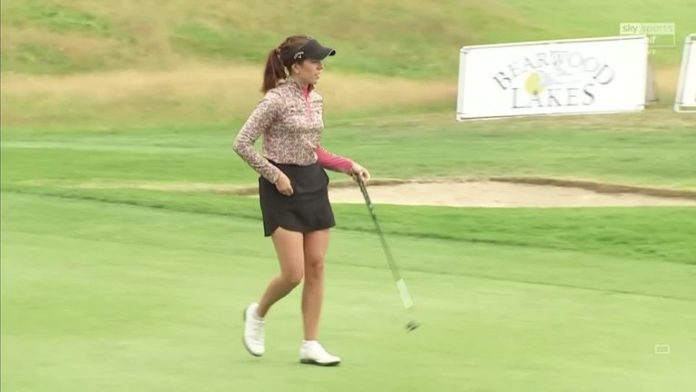 Georgia Hall ended a run of runner-up finishes on the Rose Ladies Series with a hard-fought victory in week six at Bearwood Lakes.

The former Women’s Open champion, who finished tied-second in all three of her other appearances in the series, carded a one-under 71 to claim a one-shot victory on a tough scoring day in Berkshire.

Meghan MacLaren, who won on week two at Moor Park, finished in the six-strong group sharing second on level-par, while American Golf Order of Merit leader Charley Hull posted a three-over 75 to end in tied-15th.

Victory saw Hall claim the £5,000 first prize and lifted her from fifth to second in the Order of Merit, leaving her just 26.67 points behind Hull with two events in the eight-tournament series remaining.

Hall recovered from bogeying two of her first four holes to take advantage of the par-five fifth and birdie the eighth, only to drop a shot at the ninth and reach the turn in 37.

Birdies at the 11th and 13th moved Hall as the only player in red figures, with the Englishwoman closing out her blemish-free back nine with a run of five straight pars.

Amateur Euphemie Rhodes briefly joined Hall on one under until she cancelled out her birdie at the 14th with a bogey at the next, with Lily May Humphreys, Inci Mehmet, Emily Slater and Cara Gainer also alongside Rhodes and MacLaren on level-par.

Liz Young finished tied-eight on two over despite opening with three bogeys in the first four holes, with last week’s winner Gabriella Cowley a further shot back after following back-to-back bogeys around the turn with a dropped shot at the last.

The series heads to The Shire next week, before a 54-hole Grand Final – held across three venues and finishing on Wentworth’s iconic West Course – takes place from August 5-7.

Watch highlights of the Bearwood Lakes event from the Rose Ladies Series on Wednesday at 6.30pm and 11.15pm on Sky Sports Golf!