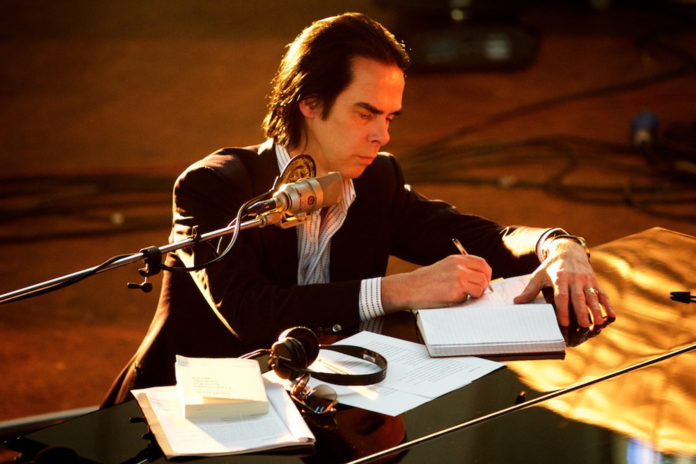 For decades, Nick Cave has flanked himself at concerts with at least half a dozen members of his band, the Bad Seeds. Dressed in black leisure suits with widely flayed collars, like a gang of 1970s accountants out on the town, they always appeared to have his back — not just by filling his dusky songs with violin and vibraphones, but also emotionally, as he sang about failed romance, grief, and enormity. No matter what he sang, with the Bad Seeds behind him, you knew he would be all right.

In recent years, though, Cave has started changing things up and occasionally going it alone. Since the death of his son Arthur five years ago, one of the places he’s looked for support has been at solo concerts, where he fields unscreened questions from fans about everything from surviving trauma to his late-in-life appreciation of Morrissey. He breaks things up by playing songs, usually deep cuts he can’t easily whip out at the Bad Seeds’ arena shows, at a piano by himself. At these shows, the inherent loneliness of tunes like “(Are You) The One That I’ve Been Waiting For” and “The Weeping Song” comes to the forefront in a way it usually doesn’t when he has his guys looking out for him.

In Idiot Prayer: Alone at Alexandra Palace — a one-time-only, pay-per-view concert film shot at a spacious 19th-century London venue in June that aired on Thursday night — he took it one step further, performing 22 songs and a poem by himself in the middle of an empty room. In the age of social distancing, it was a way for his fans and him to feel lonely together (ticket buyers saw a rare update for concerts these days, which read, “COVID-19 status: Going Ahead”). The film took the novelty of seeing Cave without the Bad Seeds and made it even more special. Seeing him with just a piano accompanying him, and no one to applaud him, added to the emotional weight of his repertoire and the concert felt more moving than usual.

In some shots, it looked as though he has rolled his piano into the middle of an elegant airplane hangar, since the gargantuan venue is decorated a bit like a Florentine palazzo. He dressed in his standard-issue black suit, which paired well with his perennially sable hair and the gold rings that adorn each finger of his left hand. He scowled and squinted at the lyric sheets in front of him, and apparently tossed them on the floor when done, since the piles of his words slowly stacked up.

Whether by design or coincidence, most of the songs he chose for the film seemed custom-fit for seclusion. His Eighties material (“Stranger Than Kindness,” “Sad Waters”) consisted of tunes that could double as soundtracks for misfits and Quasimodos, who find the shadows comforting. His Nineties selections focus on yearning, especially the six numbers from his piano-heavy 1997 LP, The Boatman’s Call, and Let Love In’s “Nobody’s Baby Now.” He picked a couple of love songs from his mid-aughts mustachioed, noisy Lothario-rock band Grinderman and made them sentimental, playing up the yearning, and he resuscitated the long-neglected “He Wants You,” from 2003’s Nocturama. And after dipping his toes in a couple of numbers with wordy, surrealistic lyrics (“Jubilee Street,” the Miley Cyrus-name-checking “Higgs Boson Blues”) from the past decade, he plunged into the grief that has defined his last two brilliant, heartbreaking records, Skeleton Tree and Ghosteen.

He frowned while singing about how death was like wandering the earth during “Girl in Amber,” and stared off longingly after singing from the perspective of someone longing for their father on “Man in the Moon.” His voice nearly broke apart while crooning for comfort on Ghosteen’s “Waiting for You,” but he cracked a smile and laughed at the end of “(Are You) The One That I’ve Been Waiting For.” Some of the arrangements brought new depth to the songs — the slow pace of “Papa Won’t Leave You Henry” played up the story’s tragedy; the nakedness of “Stranger Than Kindness” revealed more otherworldliness to the impressionistic lyrics; and the death-row character waiting for the electric chair in “The Mercy Seat” sounds even more resolved with only a piano backing up Cave. (His rendition of that last song called back a bit to the one on Live Seeds, which may be the best recording of “The Mercy Seat”). Stark lighting complemented each song, adding different hues to Cave’s solitude, though one shot where it looked like natural light was pouring in through one of the doorways was a welcome reminder of the outside world.

In the middle of it all, he debuted a new song, cheerily named “Euthanasia.” Over a gently skipping piano line, he sang quietly and lowly about searching for someone he loves underneath the damp earth, in the night sky, underneath the thorn bush, and in “the old city,” until he found himself again. As he performed it, he seemed to scan the lyrics more intensely, reacting to the words as they came out of his mouth. “When you stepped out of the vehicle and attached yourself to my heart, it was a kind of dying,” he sang in only the way Nick Cave can — something like a gut punch and an embrace at the same time. It was pastel grief, and it felt appropriate.

But while it fit the moment, it was during “Euthanasia” that the emptiness of it all felt overwhelming. Usually, thousands of people would applaud after a song like that and Cave could strut the stage, arching his spindly frame over the front row to hold people’s hands. Instead, when done, he simply looked at the lyrics, stuck in time. And at the end of the concert, after singing Ghosteen’s “Galleon Ship,” and its lines about not feeling alone because of “so many riders in the sky,” he dismounted his piano bench and ambled out of the room, alone again. And then the credits rolled, a reminder that the last hour and a half was on a screen and not in a concert hall. It was a unique broadcast, with no pausing, rewinding, or fast-forwarding available, and there was something Nick Cave-ian about the whole thing when it was over, about how time is fleeting and it’s OK to find happiness in the shadows.

“Spinning Song” (poem)
“Idiot Prayer”
“Sad Waters”
“Brompton Oratory”
“Palaces of Montezuma”
“Girl in Amber”
“Man in the Moon”
“Nobody’s Baby Now”
“(Are You) The One That I’ve Been Waiting For?”
“Waiting for You”
“The Mercy Seat”
“Euthanasia”
“Jubilee Street”
“Far From Me”
“He Wants You”
“Higgs Boson Blues”
“Stranger Than Kindness”
“Into My Arms”
“The Ship Song”
“Papa Won’t Leave You Henry”
“Black Hair”
“Galleon Ship”