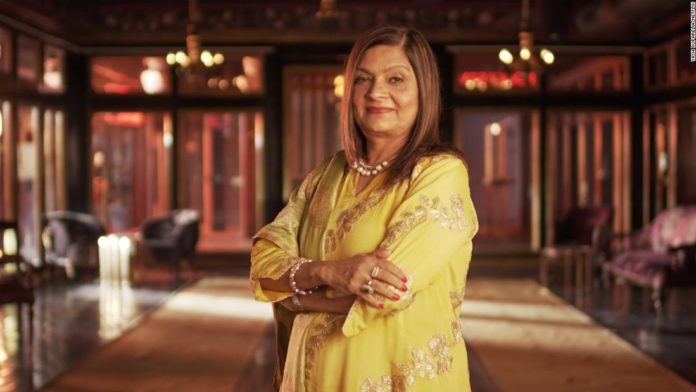 The part-documentary, part-reality TV show follows the efforts of Sima Taparia of Mumbai as she sets up clients around the world, often with families in tow, into arranged marriages. There’s Aparna, who needs her future husband to know Bolivia has salt flats; Vyasar, who carries a secret about his father trying to kill his third wife; and Pradhyuman, who concocts elaborate recipes such as peri-peri foxnuts with liquid nitrogen.
These Indian singles, they’re not just like us. But Sima Auntie, as she is known, is in the business of marrying them off anyway, guided by a “biodata” page of likes, dislikes, educational background and a photo.
That’s hardly the most offensive part. Despite trending on every social platform and the streaming service all week, the series has been criticized for perpetuating harmful stereotypes, colorism, sexism, elitism, heteronormativity, the caste system and the shallow, transactional nature of Indians looking for a life partner.
I’m ready to wade into the debate. (Hang on, muting my mentions on Twitter…) As someone who has spent her whole life as an Indian, much of her career chronicling the country and its diaspora, and written two books on global Indians, I think the criticism is misplaced.
Sima Auntie is not the problem. We are the problem.
I fear that the art of nuance and subtlety has been lost on critics. They want a deeper discussion of the rampant colorism on display here (the word “fair” to refer to skin tone is used over and over, without second thought.). They want acknowledgment of entrenched and intentional endogamy that maintains Indian power structures, rooted in caste and wealth. They want mothers and mothers-in-law to stop meddling and enforcing impossible-to-meet standards.
But this is us. The critics are not wrong but their target is. That the show was filmed before George Floyd died but released after makes this reality even more poignant. Unilever announced last month that it is removing the word “fair” from its Fair & Lovely line of skin-whitening products. The company now says it chooses to emphasize “glow, even tone, skin clarity and radiance.”
As Americans know all too well, corporate policy is one matter; changing the hearts and minds of family and society is much harder. Herein lies the genius of “Indian Matchmaking.” Maybe an Oscar-nominated director like Smriti Mundhra knows exactly what she is doing; just look at her narrative pacing, music selection and cutaway moments with adorable, elderly couples. Her decisions are intentional and calculated and intended to effect change. That’s the role and power of media. She’s not redeeming the cavalier manner in which families perpetuate inequality and outdated thinking. She’s exposing it.
The mirror is being held up and it’s impossible to look away.
Those who are offended by it often prove “Indian Matchmaking’s” point. We mock Aparna for her snobbish, exacting ways as she says not hating someone makes for a successful date. Yet even this criticism is loaded with the unattainable expectations we put on Indian women. Her reference to Bolivian salt flats, also chastised as elitist, is among the scant examples in the eight-part docuseries of a world view beyond, say, a Texas axe-throwing club or a Mumbai nightclub. What she seeks in a partner is intellectual compatibility. Don’t we have that right?
The spotlight on the derivative manner and ancient customs of matchmaking in India — that far-off country where arranged marriage rivals snake charmers in Western cliched depictions — should force us to reconsider allegedly more modern practices. Like swiping right.
Among the revolutionary bits of advice from Sima Auntie: Focus on one match at a time. Don’t move on till you’ve ruled him or her out. I think of what a friend in New York City once called the “-er” problem in online dating. “There’s always someone hotter, better, taller, richer out there,” she told me, exasperated and single into her mid-30s. She left New York City and quickly found love in a smaller pond.
It is too easy to look at Indian society as oppressive through the lens of arranged marriage and demand disruption — versus challenging the whole institution, East or West, love or arranged, IRL or online.
Indeed, there are quieter revolutions within “Indian Matchmaking,” such as the number of subjects who are divorced or the products of divorce. Once taboo among Indian families, divorce is explained away by Sima Auntie with the proclamation: “Marriages are breaking like biscuits.” She matter-of-factly assures the clients she will find them matches.
Why? Because Sima Auntie is the ultimate businesswoman and her ability to change is a revolution itself, representing the chameleon-like adaptation of Indians in a connected world. Confronted with nontraditional, challenging candidates to place, she does not give up, instead turning to life coaches, astrologers and fellow matchmakers who might have more modern networks.
But why, critics rightfully ask, were all the matches heterosexual? India struck down sodomy laws and decriminalized homosexuality two years ago.
Here, I have faith in the undercurrent of capitalism and globalization that runs through “Indian Matchmaking.” After all this hype, there surely will be a second season. And surely Sima Auntie will find someone to help her arrange same-sex couples — as long as she gets her cut.