Home Culture Backstage with… the star of one of the first new UK cinema... 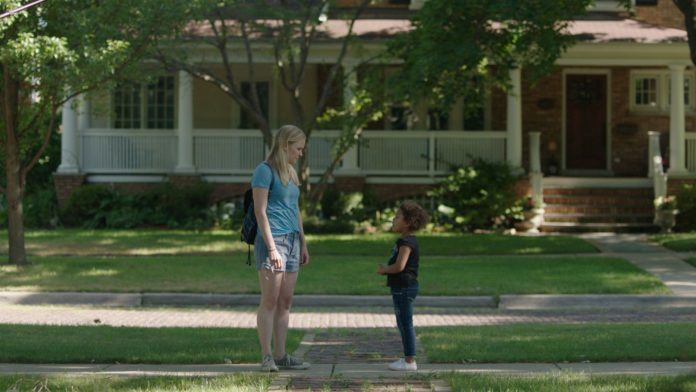 US comedy-drama Saint Frances will be one of the first new films showing in UK cinemas since the coronavirus lockdown began.

The movie is opening in a world where some cinemas remain closed, and smaller, independent chains may never open again.

It’s something the film’s lead and writer, Kelly O’Sullivan, was painfully aware of when she spoke to Sky News’ Backstage podcast.

“I just keep thinking ‘When are we going to get to do what we love again?’… Everything is a giant anxious question mark,” she said.

But, still, she has hope.

“I think the film industry will come back faster than say live theatre. I think about that quite often too – the industries which are going to be at the very tail end of you know, whatever this thing is that we’re experiencing.”

In the US, Congress approved the much-lauded Coronavirus Aid, Relief, and Economic Security Act, providing more than $2tn (£1.6tn) in funding for a pandemic-stricken nation.

To put that into perspective, that’s the same amount of money Disney is said to have paid for the rights to Broadway epic Hamilton.

At the start of July, the head of the National Endowment of the Arts told National Public Radio based in Washington that more than half of that money had already been given out.

“I think [Donald] Trump thinks that he’s the only entertainment we should be watching,” O’Sullivan laughed.

“He just wants all the attention all the time and he has no appreciation for art, in my estimation.

“It’s devastating to be in the midst of this administration.”

Taking place over a summer, Saint Frances follows 34-year-old Bridget, who packs in her dead-end waitressing job to become a nanny for the titular Frances.

The film sees Bridget dealing with the emotional and physical aftermath of an abortion.

O’Sullivan said she was inspired to write one of the funniest lines while she herself was lying on the table, drawing from her own experience.

“I was having this ultrasound and the nurse said, ‘Do you want to know if it’s twins?’

The societal pressure on Bridget to have children before she turns 35, all while looking after a child who is not her own, also makes for compelling viewing.

“She’s vibrant and fun and smart, and really understands a lot of what’s going on, but never gets buried in anything sombre.”

While Saint Frances is peppered with comedy, it never shies away from reality.

“We wanted to make it as realistic as possible in every way possible, including sometimes being graphic about it, and then letting ourselves laugh about the graphic nature of those things,” says O’Sullivan.

Fifteen minutes in, and Bridget and her boyfriend are cleaning their faces and bed sheets, both of which are stained with menstrual blood from the night before.

Alvarez’s portrayal of a new mother gradually slipping into post-natal depression is, in particular, utterly heart-breaking.

It’s not the only dark comedy available to view right now. Michaela Coel’s I May Destroy You has taken the world by storm for its frank, honest look at sexual assault and rape.

In a recent interview, Coel said that, rather than “adding” humour to serious subjects, that “humour is always there; at every party, funeral and war, although often uninvited, she’s always there.”

O’Sullivan agrees – she’s been watching I May Destroy You while in lockdown at her boyfriend’s parent’s house in Kentucky.

“In order to make [Saint Frances] realistic, it had to have those moments of absurdity, where you’re in the middle of something that should feel dramatic, but something really funny happens.

“Life is not categorised easily into drama and comedy.”

Saint Frances is out now in cinemas and is available to buy on-demand.