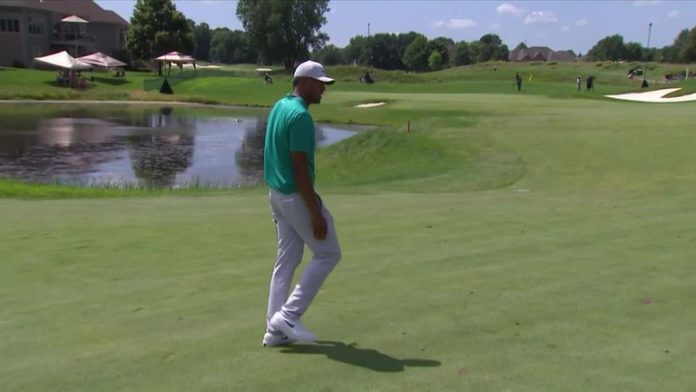 Richy Werenski and Michael Thompson share halfway lead on 12 under; watch the third round live on Saturday from 5.30pm on Sky Sports Golf.

Brooks Koepka and Tommy Fleetwood both suffered early exits the 3M Open, as Tony Finau moved within a shot of the halfway lead in Minnesota.

Koepka heads into back-to-back title defences at the WGC-FedEx St Jude Invitational and PGA Championship over the next two weeks with two missed cuts in his last three starts, after the four-time major champion posted a level-par 71 at TPC Twin Cities to slip a shot outside the cut mark.

Fleetwood – making his first competitive start since March due to the coronavirus pandemic – also failed to reach the weekend following a one-over 72, as Michael Thompson and Richy Werenski shared the lead after a hot and humid second round.

The pair posted scores of 66 and 67 respectively to get to 12 under, with Finau in tied-third alongside Talor Gooch and defending champion Matthew Wolff three off the pace in a share of sixth.

Koepka mixed two birdies with as many bogeys during his second round, nailing a 40-footer at the 14th but finishing his round with four straight pars, while Fleetwood ended the week on one over after failing to convert from four feet on his final hole.

Overnight leader Werenski, starting on the back nine, drained a 30-footer at the par-five 11th and posted back-to-back birdies from the 17th, before bouncing back from a bogey at the third to pick up shots at the fifth and seventh.

Thompson also sits on 12 under after following three straight birdies from the fifth by adding another at the 11th and then pitching in from off the 14th green, with the American holing a 20-footer at the 17th but then missing a six-foot putt for the outright lead at the last.

Finau sits a shot off the pace after a five-under 66, with a 20-foot birdie at the fourth and hole-out eagle from the fairway at the sixth moving him up the leaderboard.

The world No 17, who squandered a commanding lead at the Memorial Tournament last week, missed a five-footer to save par at the eighth before following a two-putt birdie at the par-five 12th by adding further gains at the 16th and 18th.

Gooch made a charge late in the day with a bogey-free 65 in blustery conditions to move alongside Finau, with China’s Xinjun Zhang two off the pace in fifth following a four-under 67.

Harris English – in the final group – turned in 31 and then made three birdies in a four-hole stretch from the third to get to eight under for the day and within two of the lead, only to close his second-round 65 with back-to-back bogeys.