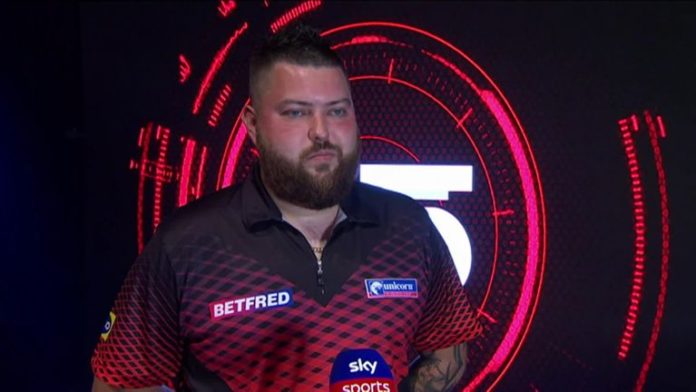 This year’s World Matchplay has been littered with shock exits, but there’s still a stellar semi-final line-up in prospect on Saturday evening in Milton Keynes.

For the first time since the 2012 World Grand Prix, none of the world’s top four progressed to the quarter-finals of a ranking major and former champion Gary Anderson is the only semi-final representative to have lifted a major PDC title.

Nevertheless, this year’s final four still comprises two multiple world champions, a five-time TV finalist and a two-time World Youth champion, therefore it’s set to be a thrilling climax to one of the most unpredictable tournaments in recent memory.

The second semi-final will see debutant Dimitri Van den Bergh meet three-time world champion Glen Durrant, who is through to the last four of the World Matchplay for the second straight year.

Smith’s route to the semi-finals

Smith is bidding to land his elusive first major title and as the highest seed remaining, he’s never had a better opportunity. However, Anderson has improved round-on-round and his experience may prove invaluable.

‘Bully Boy’ followed up his emphatic opening round win over Jonny Clayton by producing a valiant fightback to defeat 2018 finalist Mensur Suljovic, before producing a clinical display to defeat Krzysztof Ratajski in the last eight.

Anderson battled past Justin Pipe and 2007 winner James Wade to reach his fourth Matchplay quarter-final, where he delivered his best display of the tournament to dump out Michael van Gerwen’s conqueror Simon Whitlock.

Anderson’s route to the semi-finals

‘The Flying Scotsman’ leads the pair’s head-to-head record 9-7, although his former protege Smith has won their last four encounters, including their semi-final clash in the 2018 Premier League.

Smith boasts the higher tournament average and his clinical combination finishing has been a feature of his success in Milton Keynes – he boasts a 50 per cent checkout success rate over 58 legs and if he can maintain that consistency on the outer ring, he’ll take some stopping.

In their own words…

“If this was the first round and I was playing Gary, I think I’d win, because you know Gary, he doesn’t practice at all. He’s had four months of fishing and he’s not even chucked a dart. He only played in the Home Tour and that was it.

“He’s been playing really really well so I know I have got a tough game and he will know the same. I have just got to keep the 180’s going and the finishing. We know there’s only two matches left and potentially a nice Matchplay title.”

“Hopefully I’m sat here on Sunday with a trophy but I’m taking it one game at a time and it’s going to be another tough fight against Michael Smith on Saturday.

“He’s got a good record against me recently and is playing some brilliant darts, I’ve been saying how good he is for years and although it’s a bit late he’s finally starting to come through to the top.”

There seemed a time where Michael couldn’t get past Gary but that’s well in the past now. Gary hasn’t beaten Michael in a ranked event since 2017. That’s quite a while.

I just think it is Smith’s time. He was in the final last year. I think he’s got the stamina now with the health. Every indicator to me points towards Smith, except for the class of Anderson. Smith is a very astute young man and he’s not going to take anything for granted.

Gary was allowed to get the mindset of ‘I’m in control’ and he was basically in control all the way against Whitlock. That’s the only danger I see Smith facing, but if he can start reeling off 180’s, he gets it.

There will be a new name in a major PDC ranking final after stablemates Van den Bergh and Durrant came through compelling quarter-final ties on Friday evening in Milton Keynes.

Durrant stormed past former semi-finalist Jeffrey de Zwaan with a whopping 107 average in his opener, before dumping out world champion Peter Wright 11-8 in a fascinating second round encounter.

Durrant’s route to the semi-finals

He overcame Vincent van der Voort in a war of attrition to reach the last four, but after three defeats in major semi-finals against Smith, Dave Chisnall and Wright, this represents Duzza’s best chance to reach his first TV final as a PDC player.

The Teessider defeated Van den Bergh to win his first PDC ranking title in February last year which may be a good omen, although the mercurial Belgian has been incredibly consistent this week and knows that victory will see him climb into the world’s top 16 for the first time in his career.

In their own words…

“I feel fantastic, amazing, unbelievable. My first semi-final in a major tournament. I’m showing the world I have it in me. Simple as that.

“Honestly back-to-back semi-finals [at the Matchplay] is absolutely incredible. I think I was slightly embarrassed that I was the favourite going into tonight, when you’ve got Gary Anderson and Michael Smith still in the competition.

“I’ve just got this fighting spirit right now and sometimes when you go through that, is your name on the trophy? I got battered in practice by Dimitri Van den Bergh. He was sensational. I think he ruined my game because he was so good backstage.

I am so impressed with Dimitri Van den Bergh. Forget that he is 26, his CV is looking pretty exceptional already. He’s mature, Adrian Lewis came back at him last night but he dealt with him, put him back in his place. It was a fantastic performance.

Glen had to really graft. It was a match where he didn’t look like winning until he won. It’s going to be a fascinating game and it’s a contrast of styles yet again and it always will be generally with Glen, as he’s slow and deliberate but Dimitri can deal with that.

It’s a good game, it’s a massive opportunity. Most people will side with Glen, but Dimitri is still a fearless kid and he’s playing fantastic stuff. He’s heading to the top 16, he’s the captain of his country at such a young age. He’s a fantastic talent and he’s a nice lad as well. I think he’s going to be great going forward.