Home Sport ‘Broad and Anderson must play together’ 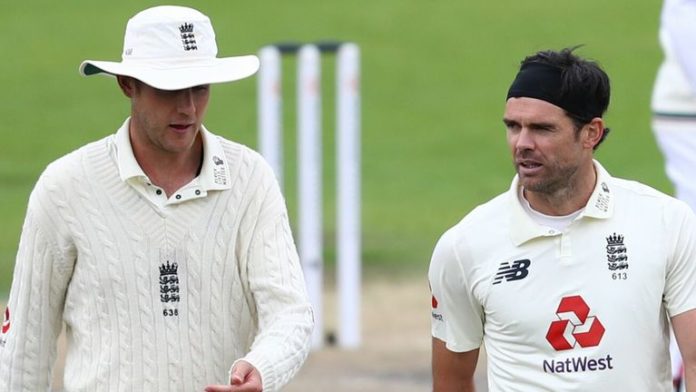 Stuart Broad: “I don’t ever walk on the field thinking, ‘is this the last time we’re going to play together?’ We both have a burning desire to keep winning Test matches for England”

Stuart Broad and James Anderson must play together for England for as long as possible.

That’s the view of Cricket Debate guests Alec Stewart and Dominic Cork after the thirty-something seamers’ impressive display on day two of the final #raisethebat Test series against West Indies.

Broad was omitted from the first Test and Anderson rested for the second but the two are in tandem for the series decider and picked up two wickets apiece as West Indies slumped to 137-6 to trail England by 232 runs.

Former England captain Alec Stewart said: “A lot has been said and written about whether Broad and Anderson are on their way out and if they should they play together.

“Well, they have shown that forget what their age is and what their birth certificates say – if you are good enough [age doesn’t matter]. Pick on performance and what people can do.

“I appreciate having an eye on the future but, here and now, Broad and Anderson taking the new ball is as good as there is and they showed all their qualities.”

Ex-England all-rounder Cork said: “I understand these are back-to-back Test matches and England want to make sure they [Anderson and Broad] play the majority of games.

“But they are closing in on 1,000 Test wickets between them and complement each other really well with their different styles of bowling.

“Jimmy understands the art of wobble seam and then when he swaps ends he tries to swing it, while Broad seems to be learning even more.

“While they are both fit and want to play, they play every single Test match for me. Unless there are injury doubts, they are the first two on the list.”

Broad and Anderson have played 117 Tests together, though only three times in the last 15 Tests have they lined up in the same England XI.

Speaking to reporters after day three, Broad said there is plenty of life left in the pair.

“On today’s performance do you think we’re in the best bowling attack?’, he asked rhetorically. “I thought we slotted back into what we do and how we work together to take wickets and the proof was in the pudding.

“I don’t ever walk on the field thinking, ‘is this the last time we’re going to play together? We both have a burning desire to keep winning Test matches for England.

“Jimmy’s record is arguably getting better and better, as is mine, so let’s keep striking while the iron is hot. When I speak to Jimmy he wants to keep going – he wants to keep trundling in when he’s 42.”

Watch day three of the series-deciding third #raisethebat Test live on Sky Sports Cricket from 10.30am on Sunday.