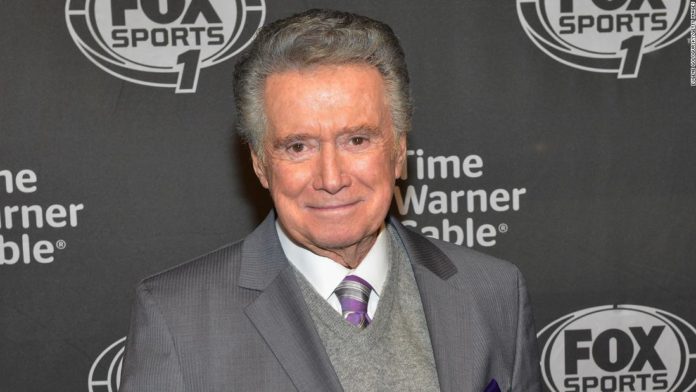 His former television co-host, Kathie Lee Gifford wrote in a tweet, “REGIS. There will never be another.”
Bob Iger, Executive Chairman of The Walt Disney Company, shared a heartfelt message about the former morning host.
“We are heartbroken to hear that a long time colleague & friend, #regisphilbin passed away at the age of 88. Regis graced us with warmth, humor & a self-deprecating wit, always bringing happiness to us all. Our hearts go out to Joy and to his family. Rest In Peace, Regis,” he wrote.
Film critic Leonard Maltin wrote “#RegisPhilbin was always generous to me from his days on local L.A.television to his long reign on national morning TV. A lovely man indeed; He had a great run… Rest In Peace.”
Producer and author Roma Downey wrote she was “So sad #RegisPhilbin R.I.P. ‘His family and friends are forever grateful for the time we got to spend with him — for his warmth, his legendary sense of humor, and his singular ability to make every day into something worth talking about,’ the Philbin family.”
Actress Bo Derek put it simply, “Another great one gone. Rest In Peace, friend. #regisphilbin #friend #rip”
Seinfeld star Jason Alexander wrote, “I truly believed that #RegisPhilbin would be a presence with us forever. He was a fun, funny, charming man. On the occasions I got to be with him, he was always a bright light, endlessly interesting and interested in everyone. Sympathy to his loved ones. #ripregisphilbin”
Comedian DL Hughley wrote, “#RegisPhilbin was always a class act. Condolences to his family on their loss.”
New York Governor Andrew Cuomo paid tribute, writing, “New York lost a TV legend today. Bronx born and raised, Regis Philbin greeted us for years with our morning coffee and at night after dinner. His humor and enthusiasm touched millions of Americans. My heart goes out to Joy and his loved ones.”
William Shatner wrote, “Saddened to hear about the passing of Regis Philbin. Condolences to his wife Joy.”
Jimmy Kimmel called Philbin “tremendous.”
“Regis was a great broadcaster, a good friend and a tremendous amount of fun. He leaves behind a beautiful family and a TV legacy that will likely go unmatched. Regis, I hope our friend Rickles met you at the pearly gates with open arms and a slew of the insults you loved so much.”