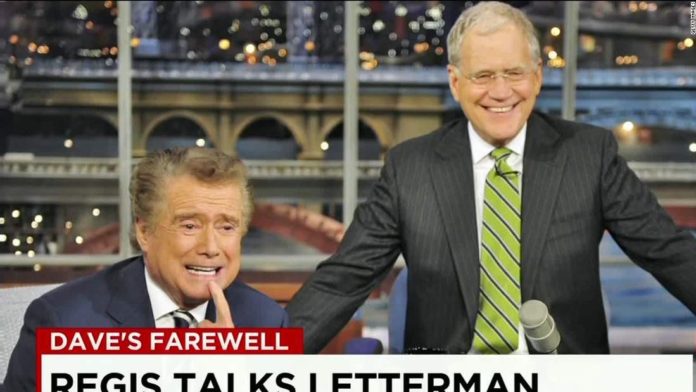 “I knew if you were there,” Letterman told Philbin, a frequent guest, in an interview more than a decade later, “we could make something of that.”
Philbin, who died Friday at 88, was, in many respects, the consummate broadcaster. He could hold an audience’s attention — as he did for more hours than anyone in the history of American television — without singing, acting or telling jokes. He simply talked, engaging in banter with thousands of guests, equally at ease hosting heads of state or ordinary folks.
Philbin honed that craft in local television, at a time when programs like the ones he hosted in San Diego, Los Angeles and New York could be major money makers for network stations.
He parlayed that into a national stage, on the long-running “Live” show in syndication and later “Who Wants to be a Millionaire,” a gameshow that towered over the TV ratings in the US (having already done so in the UK), representing a kind of crowning achievement to his career. Given the show’s importance to ABC, Philbin was fond of telling people with his customary enthusiasm, “Regis saved the network!”
Of course, that career lingered even after “Millionaire” faded and disappeared from primetime. Philbin retired from his morning program in 2011, announcing those plans months in advance, in a way that allowed him to leave on his terms. Co-host Kelly Ripa lauded him at the time as “the world’s greatest storyteller.”
The kind of TV personality represented by Philbin — who was often identified just as “Regis” — has become an almost lost art. Part of that has to do with the fragmentation of the TV landscape, allowing for more narrow programming, tailored to different audience segments, than the kind of big-tent show where Philbin thrived, serving as the genial ringmaster.
Even if you didn’t watch him, your mother or someone else close to you probably did — and felt like they knew him.
“I regard you to be a master communicator,” Letterman told Philbin in their last latenight appearance together, while the seemingly tireless Philbin closed by telling him, “You must come back to television.”
Another underrated key to Philbin’s persona was the fact that he never appeared to take himself too seriously. Sure, he had an ego, but his stated approach was always to try and make the guest look good, first and foremost.
Amid an outpouring of tributes, Jimmy Kimmel tweeted that Philbin was “a great broadcaster, a good friend and a tremendous amount of fun.”
Just the kind of guy you’d feel comfortable inviting into your home, as millions did, day after day, week after week, and year after year.