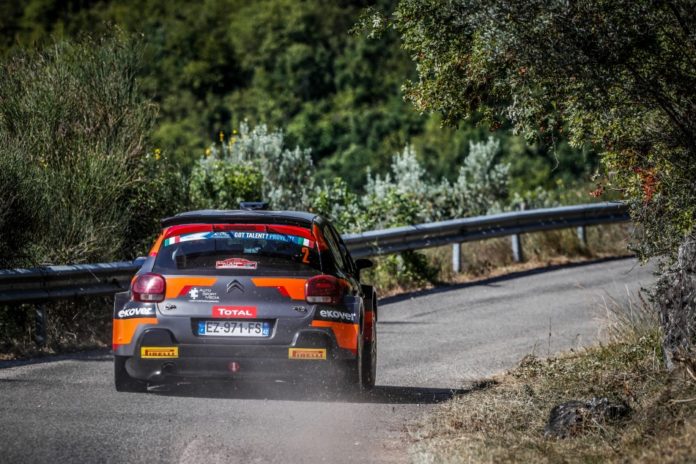 Alexey Lukyanuk has restarted international rallying in style by winning all six stages on leg one of Rally di Roma Capitale, the opening event of the 2020 FIA European Rally Championship season, to hold a strong overnight lead.

Competing alongside new co-driver and fellow Russian Dmitry Eremeev for the first time, Lukyanuk kept last year’s winner Giandomenico Basso – the double ERC champion – behind throughout the day via an accomplished display in his Pirelli-equipped Citroën C3 R5.

Basso, making his competition debut in a Loran-entered Volkswagen Polo GTI R5, is 34.1s behind Lukyanuk in second with Oliver Solberg an impressive third overall and the top ERC1 Junior runner, 13.0s down on his experienced Italian rival in another Polo.

Romanian champion Simone Tempestini (Škoda Fabia R5) is 7.5s behind Solberg in fourth with Fabian Kreim 5.0s further back in fifth on his Polo debut. Craig Breen (Hyundai i20 R5) completes the top six, 0.1s adrift of Kreim, on his return to the ERC with Team MRF Tyres.

COVID-19 protocol takes centre stage on international rallying’s restart
With myriad strict measures in place in response to the COVID-19 pandemic, Rally di Roma Capitale is the first FIA international-level event to run since lockdown restrictions eased in certain countries. Drivers and teams have united in their praise of the extensive steps taken by organiser Motorsport Italia to provide a safe and secure environment for competitors and volunteer officials alike in partnership with the FIA, ERC promoter Eurosport Events and Italian federation ACI Sport.

Despite only getting back behind the wheel of his Saintéloc Junior Team Citroën for the first time since last season’s Rally Hungary during a test on Tuesday, a gap of 255 days, Lukyanuk showed no sign of lacking in seat time by leading from the start.

“It’s going really nice, no push really controlling the pace,” said Lukyanuk. “I’m happy with the day, it looks like we did quite a good job in every stage. Thanks to the team for the perfect car and Pirelli for the tyres. The package is working. The feeling is quite okay and I would say I am more or less relaxed inside. It looks like this period of quarantine was not affecting me so much.”

Basso was 9.8s behind Lukyaunk after three stages but gradually slipped back in the afternoon. “We want to fight in the ERC but here we have to look to the Italian championship,” Basso said. “We are in first position and each day is a different round so we are in a good position.”

“It was difficult because you don’t see some stuff and the main problem is I can’t judge distances without glasses on one eye so that can be difficult,” said Solberg. “My father found them but someone had run over them so I had to drive without them. But I am taking it easy with no risks at all, trying to learn as much as possible about tyre management and to understand the whole Tarmac concept basically. But the times are quite good and it’s more than I expected from my side.”

Comeback hero Melegari on top in ERC2 as Poloński hits trouble
Zelindo Melegari leads ERC2 at the overnight halt following Dariusz Poloński’s retirement with a suspected turbo fault. Poloński was fastest in class through SS1 in his Abarth 124 rally but was in trouble after five kilometres of SS2. For Melegari, however, the achievement is significant on his first event since he and co-driver Corrado Bonato were injured in a crash on Barum Czech Rally Zlín last August. Andrea Mabellini is second and the top Abarth Rally Cup contender with Roberto Gobbin third in a second Abarth. Czech Petr Nešetříl is fourth in his Porsche 997 GT3 with Igor Widłak and Dmitry Feofanov next up.

Torn’s Fiesta in front in battle of new Rally4 cars
Ken Torn leads ERC3 and ERC3 Junior in his all-new Ford Fiesta Rally4 with Pedro Antunes second in Peugeot’s all-new 208 Rally4. After a puncture on the first stage, Pep Bassas set the pace on SS2 and SS3 for Rallye Team Spain. He was quickest again on stage five and is third in class overnight followed by Amaury Molle, William Creighton, Adam Westlund and Nikolai Landa.

Crugnola, Fourmaux in trouble during opening stages
Amid searing ambient temperatures, Saturday morning’s running was truncated when Andrea Crugnola and Adrien Fourmaux crashed on stages one and two respectively. On both occasions the action was delayed while the damaged cars were recovered. However, there were no injuries to any crew.

One of the favourites for victory, Crugnola crashed 2.3 kilometres after the start of the opening 13.40-kilometre Pico-Greco stage, which he said could be decisive in the outcome of the rally prior to the start in Rome last night. Emil Lindholm, who was running behind the Italian, told ERC Radio reporter Chris Rawes what he had seen. “It was a quick right-hander over a crest,” said Team MRF Tyres’ driver Lindholm. “It looks like he hit a barrier and crashed into the rock face. Two wheels were missing from the car.”

Having been delayed through the final five kilometres of stage one with a front-right puncture on his M-Sport Ford World Rally Team-run Fiesta R5 MkII, Fourmaux rolled into retirement on the next test.

Troubled restart for Czech mates
It was a tough morning for Czech drivers Erik Cais and Filip Mareš. Cais retired with damaged right-rear suspension at the end of SS1, while Mareš dropped more than 30s to Alexey Lukyanuk when he spun and had to reverse. He’s P11 overnight having battled back into contention following his free practice roll.

In need of Devine intervention
Callum Devine was P11 when he was forced out by a reported engine failure on his Motorsport Ireland Rally Team Academy Hyundai at the finish of stage three. Other drivers to retire on leg one included MOL Racing Team’s Norbert Herczig, who crashed out on SS4, ERC Junior quartet Pedro Almeida (fuel leak), Miika Hokkanen (accident), Dennis Rådström (suspension damage) and Rachele Somaschini (accident). Enrico Brazzoli and Damiano De Tommaso were non-starters after crashing in shakedown. Łukasz Lewandowski was another non-starter, while Sergio Fuentes went off the road on SS1.

Double ERC Junior champion Marijan Griebel is down in P18 following a puncture. Albert von Thurn und Taxis is P16, one place ahead of close friend Niki Mayr-Melnhof, who has been beset by problems throughout the day. Italians Antonio Rusce and Alessandro Re completed leg one in P13 and P14 respectively followed by ERC1 Junior Dominik Dinkel.