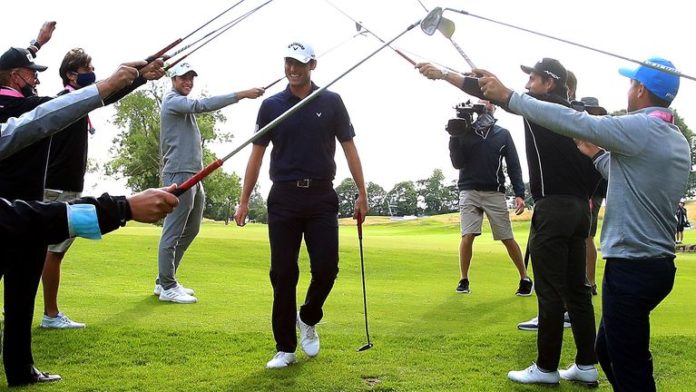 Renato Paratore welcomed the adverse weather at Close House as he believed the conditions helped him to victory at the Betfred British Masters.

Paratore revelled in the wind and rain throughout the week in the north east and dropped only two shots in 72 holes – both in quick succession on the final day – as he claimed an impressive three-shot victory over teenage Dane Rasmus Hojgaard.

The 23-year-old looked calm and composed for most of the final round and closed with a resolute two-under 69 which earned him his second European Tour title, his first coming in similar conditions at the Nordea Masters in Sweden three years ago.

“I am really happy. I played very solid and I didn’t expect to come back and win my second title after the lockdown,” said the fast-playing young Italian. “I have worked really hard over the last year and I am really happy to win again.

“Both of my wins have been tough fought on my part. In Sweden, the last day was rainy and windy, so both were tough conditions but I think that helped me because there weren’t low scores, and I was playing really good, so I was able to focus myself to stay in the lead.

“I never thought about it today because if I start to think about it, I am going to make a bogey. So, I just told myself to play good and try to win the tournament. It was really windy and really difficult, and when I made the first bogey, I made a really good birdie after to stay in the tournament.”

Paratore reflected on his win shortly afterwards with Sky Sports reporter Tim Barter before being congratulated by his mother, live from the family home in Italy via an iPad on the green, and he was then given a guard of honour by several players who had stayed to watch his winning moment.

“It was really amazing, I didn’t expect that from my friends here on Tour, and it was a good sensation,” he added. “These are the moments I love and to speak to my mum, it was a big surprise and I was really happy.

“It was a little bit strange but fortunately there is some crowd at the end but the last hole I just tried to think about making birdie and that was it.

“But, for me, the European Tour have done a really great job. It is not easy to come back to tournaments with this situation, and they have been good with the restrictions at the golf course and the hotel. It is not easy because you have to do golf club-to-hotel, then hotel-to-golf club, but we have to do this for the benefit of the Tour and to play more events.

“I think I will play the next four events. I planned before this tournament to play five in a row, and now I may play one less. I said to my caddie and my team, the goal is to go to the US Open.”