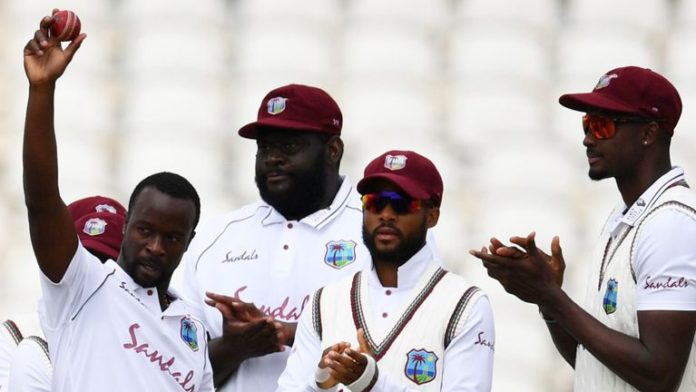 “It is a tremendous achievement for him to get there. It shows hard work and dedication pays off”

Roach became the first quick from the Caribbean to collect 200 Test scalps since Sir Curtly Ambrose in 1994 when he forced Chris Woakes to chop onto his stumps in Manchester.

Speaking on the The Cricket Debate, former West Indies paceman Walsh – who bagged 519 Test wickets – said of Roach: “It is a tremendous achievement for him to get there.

“Just below him is the legendary Wes Hall – he was the daddy, the leader of the pack. When I started they called him ‘The Chief’ because he was chief wicket-taker.

“So it is a tremendous list for Roach to be on and he must be feeling chuffed.”

It was a heartwarming feeling, I’ve worked hard to get to this stage. I base my career on milestones – 200 is ticked off now. Let’s see what 250 looks like,let’s see what 300 looks like.

Stewart said: “Forty-two per cent of his wickets are top three batsmen, which I understand is the highest percentage of West Indies bowlers with 150 wickets or more. So he is a real new-ball strike bowler.”

Cork added: “When he first played for West Indies he was a quick, aggressive bowler, but now I see him knowing what his plans are.

“He can sit in and give nothing away and then crank it up, like Ambrose and Walsh used to do. He has evolved as a fast bowler and will get better and better.”

When asked why it has taken West Indies 26 years for another bowler to pass 200 Test wickets, Walsh said: “I was a bit surprised when I saw the stat as I didn’t realise Curtly was the last.

“We have had some injuries to guys like Jerome Taylor and Fidel Edwards, so guys weren’t able to play for as long as they wanted.”

Roach finished with figures of 4-72 in England’s 369 all out, after dismissing Dom Sibley, Ben Stokes and Jofra Archer as well as Woakes.

However, West Indies then slumped to 137-6 by stumps to trail by 232 runs as England wrestled control of the game.

Watch day three of the series-deciding third #raisethebat Test live on Sky Sports Cricket from 10.30am on Sunday.