Home Sport How to win the World Matchplay? 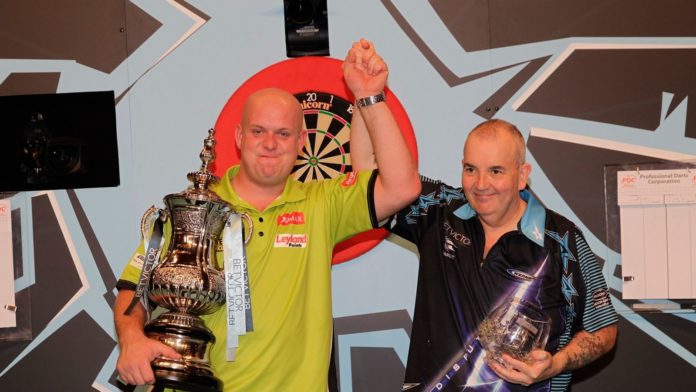 There have only been nine winners of the World Matchplay since the tournament’s inception in 1994, although Dimitri Van den Bergh will be hoping to change that statistic on Sunday evening in Milton Keynes.

The Belgian is the first debutant to progress to the World Matchplay final since James Wade stormed through the field on his Winter Gardens bow in 2006, and Van den Bergh takes on 2018 champion Gary Anderson in Sunday’s showpiece.

The discussion around what constitutes a major is a perpetual darting debate, although there is no doubting the prestige of the Matchplay, despite the unique circumstances surrounding this year’s event.

The World Championship is indisputably the pinnacle of the sport, but the World Matchplay is a close second and there’s an argument to say it’s the toughest tournament to win.

The global appeal of the World Championship provides compelling narratives, but the Matchplay features the best 32 players on planet darts – the world’s top 16 and the best 16 performers on the Pro Tour.

That strength in depth is evidenced by some of the established names that missed out on qualification, including former BDO world champion Stephen Bunting and multiple major finalist Mervyn King.

The format also provides an extensive test of your darting credentials. The set-play format adopted at the World Grand Prix and World Championship can afford players a momentary lapse, but the Matchplay is a different proposition.

Every single leg matters in leg-play and with the elongated format which is mirrored at the Grand Slam, it’s the ultimate test of endurance, ability and mental strength.

Phil Taylor is the only player in the event’s history to have lifted the crown on more than two occasions and his astonishing haul of 16 titles is testament to his remarkable consistency and relentless pursuit of perfection.

Anderson is aiming to join Sky Sports pundit Rod Harrington and current world No 1 Michael van Gerwen in winning a second Matchplay title, but Van Gerwen’s recent struggles at this tournament illustrate just how difficult it is to win.

‘The Green Machine’ claimed back-to-back successes in 2015 and 2016 but has failed to go beyond the quarter-finals in his previous four appearances.

He succumbed to Jeffrey de Zwaan in his opener in 2018, before suffering consecutive second round exits against Glen Durrant and Simon Whitlock in the last two years.

Larry Butler was the winner of the inaugural Matchplay in 1994, defeating Dennis Priestley in a memorable finale, while Peter Evison also defeated ‘The Menace’ to achieve his darting dreams in 1996.

Harrington recorded successive triumphs in 1998 and 1999 before Taylor’s monopoly took centre stage. ‘The Power’ fittingly scooped the title in his retirement year in 2017, whilst Anderson and Rob Cross claimed their maiden titles in 2018 and 2019 respectively.

James Wade is a six-time Matchplay finalist and won his first major at the Winter Gardens in 2007, while Sky Sports’ very own Colin Lloyd defeated his colleague John Part in the 2005 edition, courtesy of a spectacular 170 checkout on the bull.

Will Van den Bergh become the 10th man to lift the Phil Taylor Trophy? We caught up with former winners Wade, Lloyd and Van Gerwen to discuss what it takes to win the World Matchplay….

“In my opinion it is the best format in the world. It is a true reflection of how you’re playing. It’s not like sets – sets are a lost world in my opinion because you can win more legs and lose the game. I never understood that.

“Match format is the best format. You’re first to a certain amount of legs and that’s it, it’s done. In sets you can play like a game-play, you can rest back and let that set go and then come back when it’s your throw. But match-format, you can’t hide.”

“There is only a certain few [who have won it]. James is one of them, I’m one of them and there are some cracking names on that trophy.

“I think with the Matchplay – sometimes you can have a lapse in set-play and you can think: ‘That’s alright, that set has gone. That’s fine’.

“In Matchplay you can’t, you have to be focused and focus on every single leg, because before you know it you could lose two or three legs and then you can look up to the scoreboard and think: ‘Oh if I lose two more legs here I’m out’.

“What does it take to win the Matchplay? Concentration, dedication and of course ability. They are the three most important things.

“Your mental aspect is really big in this game, especially because it is longer formats, something that I like.

You would not say that after the last two editions because I did quite poorly in them, but it normally suits me. It’s one of the biggest, I think it’s the third biggest tournament of the year and I treat it like that.”

Darts is back on Sky Sports in August, as the Premier League returns with six consecutive nights of action getting underway on Tuesday August 25.