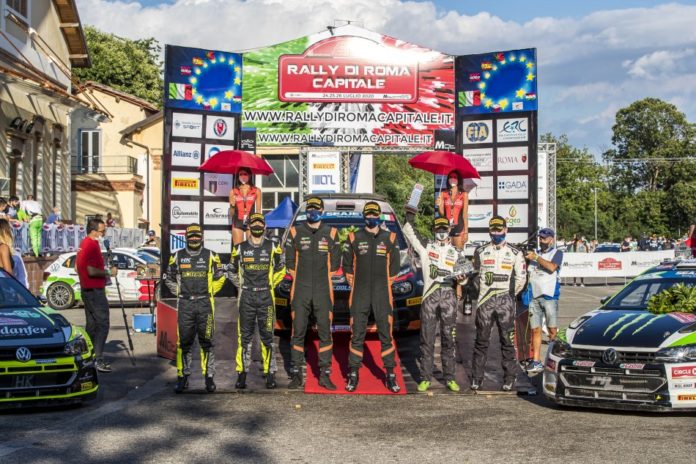 International rallying returned with a bang this weekend as Russian Rocket Alexey Lukyanuk charged to victory on Rally di Roma Capitale, round one of the delayed 2020 FIA European Rally Championship.

Partnered by new co-driver Dmitry Eremeev, the Saintéloc Junior Team ace led from start to finish in his Pirelli-equipped Citroën C3 R5 to claim his second win in Rome and his 10th in the ERC by 16.1s.

“It’s good points for the championship and of course winning in Rome is something special,” said Lukyanuk, who hadn’t driven a rally car for 255 days prior to a test on Tuesday. “It’s a unique race with very hard competition. It was a long rally, very tough and very hot. It took a lot of effort to achieve the result and I’m delighted for the performance and happy for the team. I thank our sponsors for their support in this hard situation. You never expect to be the winner and when it comes it’s a special feeling. It was a controlled drive, quite calculated with reasonable pace. It’s very pleasant to see we didn’t lose our feeling and our performance during this lockdown. But without my new co-driver this result would not have been possible.”

Giandomenico Basso, the two-time ERC champion who won this event 12 months ago, finished second with Oliver Solberg taking third and winning the ERC1 Junior category on his Roma debut.

Ken Torn won a frenetic battle for ERC3 and ERC3 Junior glory, as his rally-long rival Pedro Antunes crashed out of first place on the final stage. Pep Bassas took second for Rallye Team Spain on his first event as the winner of Spanish federation RFEDA’s Beca Júnior R2 scholarship.

Leg two round-up
After winning all six stages on Saturday to build an advantage of 34.1s, Lukyanuk was second best to Basso this morning, with the two-time ERC champion going quickest on the first and second stages north of rally hub Fiuggi. At the regroup in the thermal spa town earlier, Basso had narrowed Lukyanuk’s overall lead to 29.3s with Oliver Solberg maintaining his grip on third as the top ERC1 Junior driver.

Basso scored a brace of stage wins in the middle loop to start the final trio of tests 23.9s behind Lukyanuk. Although he would win the penultimate test, Lukyanuk’s controlled performance and measured approach in ambient temperatures exceeding 30 degrees centigrade meant the Russian was never truly threatened.

Solberg belied his absence of Rally di Roma Capitale experience on his first pure Tarmac rally in a Volkswagen Polo GTI R5 to take third with Hyundai-powered Craig Breen taking advantage of a spin for Simone Tempestini on SS13 to grab fourth.

Tempestini admitted he struggled to “wake up” and repeat his flying form from Saturday this morning. Despite only confirming his Roma entry on Tuesday, Tempestini was 2.3s ahead of Breen starting the final trio of stages, but his spin caused a six-second delay and Breen finished 1.3s in front. Meanwhile, Breen, on his return to ERC action with Team MRF Tyres, was hugely praiseworthy of the rate of progress of the Indian company’s development programme.

ERC3 Junior champion Efrén Llarena starred on his step up to ERC1 Junior, finishing sixth after adapting the handling of his Rallye Team Spain C3 R5 more to his liking by tweaking the spring and anti-roll bar settings. Hyundai Junior Driver Grégoire Munster took seventh on his second outing in an i20 R5 with ERC1 Junior champion Filip Mareš battling back to eighth after a tough rally, which began with a roll in Friday practice. Young guns Emil Lindholm and ORLEN Team’s Polish champion Miko Marczyk impressed as they rounded out the top 10.

More drivers rewarded in ERC 2020
With points awarded to the top 15 classified finishers from this season, more drivers than ever before scored ERC points on Rally di Roma Capitale. By finishing in positions 11-15, Alessandro Re, Antonio Rusce, Dominik Dinkel, Albert von Thurn und Taxis and Marijan Griebel all scored.

COVID-19 protocol takes centre stage on international rallying’s restart
With myriad strict measures in place in response to the COVID-19 pandemic, Rally di Roma Capitale is the first FIA international-level event to run since lockdown restrictions eased in certain countries. Drivers and teams have united in their praise of the extensive steps taken by organiser Motorsport Italia to provide a safe and secure environment for competitors and volunteer officials alike in partnership with the FIA, ERC promoter Eurosport Events and Italian federation ACI Sport.

Hard time for Kreim
A strong fifth overnight on his return to ERC1 Junior action, three-time German champion Fabian Kreim’s debut in a Volkswagen Polo GTI R5 ended on Sunday’s first stage when he crashed into a wall. “It was my mistake,” he said. “I did a mistake on my pacenotes and have written left-entry-flat and 40-metre hairpin-left. And for this I was definitely too fast and crashed into a wall and broken the front-right wheel.”

Crugnola quick on restart
For the second Rally di Roma Capitale running it was a case of what might have been for Andrea Crugnola. After a puncture robbed him of victory 12 months ago, a crash on stage one wrecked his hopes of first place. He restarted on day two, scored six stage bests and five ERC bonus points for winning leg two. There was no restart for Adrien Fourmaux, however, the Frenchman having rolled his M-Sport Ford World Rally Team entry on SS2.

Melegari savours his “perfect day” in ERC2 on injury comeback
Zelindo Melegari described winning ERC2 on his comeback from injury as a “perfect day”. Melegari hadn’t competed since a crash on Barum Czech Rally Zlín last August left him and co-driver Corrado Bonato with serious injuries. But he showed no lasting affects to win ahead of ERC newcomer and Abarth Rally Cup winner Andrea Mabellini and Porsche 997 GT3 driver Petr Nešetříl.

“I am very happy for this result after one year away from rally,” said Italian Melegari. “It was the first rally with the new car on Tarmac, a perfect day. I was happy also to fight with the young drivers in the Abarth Rally Cup. It’s a good result for continuing the season.”

Roberto Gobbin drove his Abarth 124 rally to fourth with Latvia-based Dmitry Feofanov fifth, hitting back from a roll during testing on Tuesday on his second start on Tarmac. Poland’s Igor Widłak retired prior to SS7 with a sensor failure.

Abarth Rally Cup contender Dariusz Poloński was back in action for leg two after a turbo issue forced him out on Saturday morning. After going fastest in the one-make series and in ERC2 on SS7 and SS8, more turbo problems struck on SS9, forcing the Pole to retire for a second day running.

Driving a Peugeot 208 Rally4 on Pirelli tyres, Antunes snatched the lead from Torn with two stages remaining only to crash out on the final run.

That left Torn to take the win in his Pirelli-equipped car as Pep Bassas inherited second place for Rallye Team Spain, with Amaury Molle battling to the finish in a fine third as technical issues struck the Belgian’s older-specification 208 in the closing stages.

A brake issue caused Adam Westlund to crash out of fifth place on SS11. An electrical issue stopped William Creighton on SS10, while Miika Hokkanen went off the road on SS3 when a damaged steering rod failed. Sergio Cuesta retired with engine failure on SS6.

P1 Racing Fuels Podium Challenge begins
The P1 Racing Fuels Podium Challenge, run for the first time during the 2019 ERC season finale in Hungary, will reward the top three finishes on every ERC1 and ERC2 round with fuel vouchers that can be exchanged for P1 XR5 race fuel at subsequent events, helping competitors to further reduce the cost of competing. Across both categories, winning drivers will be entitled to 150 litres of fuel, while second and third placed drivers will receive 100L and 50L of the product respectively.