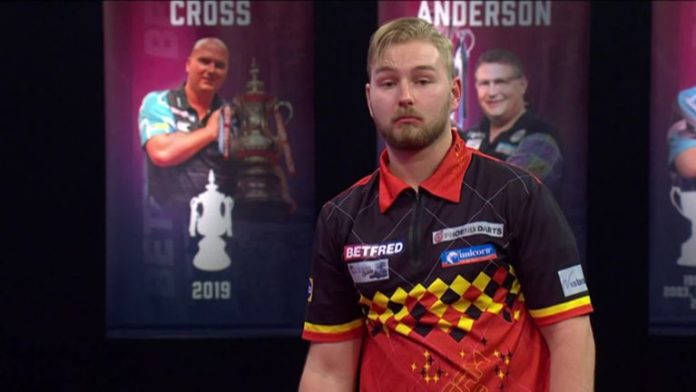 Darts is back on Sky Sports next month, as the Premier League returns with six consecutive nights of action getting underway from August 25

A new-look tournament has a new champion after Dimitri Van den Bergh stunned Gary Anderson to claim the World Matchplay title on his debut with a brilliant 18-10 victory in Milton Keynes.

Playing in his first PDC major final, and inspired by a barrage of three-figure finishes on the bullseye, Van den Bergh produced a nerveless display to grow stronger as the game went on and end an out-of-sorts Anderson’s hopes of a second Matchplay title in three years.

The Belgian, who performed his trademark dance on stage throughout the week, led 10-8 after a gritty start to the contest, but a sizzling five-leg burst with a pair of huge checkouts took him to within sight of the finishing line at 15-8 – and he won three of the next five legs to claim the title.

In a tournament full of surprises, that saw all of the world’s top four beaten before the quarter-finals and only two of the top 10 make it into the last eight – it was no surprise to see a new name on the Phil Taylor Trophy.

As well as the £150,000-winners’ cheque, Van den Bergh rises into the world’s top 16, becomes only the second player to win on debut after Larry Butler in the inaugural tournament in 1994 and claims a landmark for his country as Belgium’s first winner of a PDC major title.

The occasion seemed to get to both men early on in a nervy opening session. Van den Bergh, playing in his first major PDC final, could perhaps be excused but not the experienced Anderson.

With both players averaging in the mid-80s it was the younger man who wrestled back the early initiative, edging the opening session 3-2, although as would become a familiar sight, Anderson missed darts to have led 4-1.

As the averages moved into the 90s and the standard improved, Van den Bergh took out a classy 121 finish either side of Anderson doing just enough to get an arm wrestle of a contest back on throw – a clinical 61 ensured the opening 10 legs had been shared.

With the scores all square, the game caught fire after the second interval. Anderson broke with a superb 130 finish to take the lead only to see Van den Bergh respond with the best possible out on the board – the magical 170 on the bullseye.

Having dispatched Nathan Aspinall, Joe Cullen, Adrian Lewis and Glen Durrant on his way to the final, Van den Bergh was about to claim his biggest scalp. He returned from the break to claim two legs on the bounce and open up the biggest advantage of the match so far at 10-7.

Anderson, who had changed his darts early on, could not get a rhythm going and remarkably was without a maximum in 18 legs, but the Scot pinned double top with his last dart in hand to stay in touch, only for Van den Bergh to follow with two more legs and, when he nailed 124, he led by five with his average approaching three figures.

He followed up with a sizzling 134 on the bullseye for a 14-8 lead to stand within touching distance of the finishing line and with the Belgian seven clear at 15-8, Anderson finally hit his first maximum of the match for 15-9. The Scot claimed a 10th leg but then missed three darts to draw within five and was punished by a ruthless Van den Bergh who now stood one away.

Three more missed darts for Anderson gave Van den Bergh a chance of victory and, having hit almost 50 per cent of his doubles throughout, he made no mistake to claim the title.

Darts is back on Sky Sports next month, as the Premier League returns with six consecutive nights of action getting underway on Tuesday August 25.