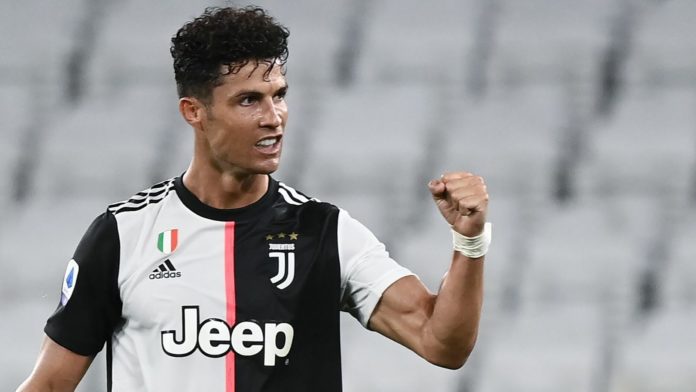 Cristiano Ronaldo scored his 31st goal of the Serie A season as Juventus beat Sampdoria 2-0 to win the title for a ninth successive time.

At the final whistle, Juventus players danced in celebration and embraced each other in front of the empty stands inside the Allianz Stadium.

For his 31st goal in 32 matches, Ronaldo completed a set-piece when Miralem Pjanic rolled across a free-kick for the five-time Ballon d’Or winner to fire into far top corner in first-half stoppage time.

Federico Bernardeschi then sealed the win by scoring his first Serie A goal in nearly two years by knocking in a rebound of Ronaldo’s shot midway through the second half.

Sampdoria were reduced to 10 men when Morten Thorsby picked up his second yellow for a foul on Pjanic 13 minutes from the end.

Ronaldo then missed the chance to increase his haul as he struck the crossbar with an 89th-minute penalty.

Still, Juventus moved an insurmountable seven points clear of Inter Milan with two games remaining and can now switch their focus to the Champions League.

The Bianconeri host Lyon in the delayed round-of-16 second leg on August 7, needing to overturn a 1-0 loss from February. If Juventus can do that, they will advance to the final eight in Lisbon.

It was a bitter-sweet night, though, as Juventus lost both right-back Danilo and forward Paulo Dybala to injury in the first half.

Danilo clashed heads with a defender, while Dybala pulled up with an apparent left-thigh issue.

Juventus entered the break for the coronavirus pandemic with a one-point lead over Lazio in what was expected to be a two-way fight for the title but the Roman club struggled for much of the restart.

It was Juve’s 36th Italian league title overall and a first for former Chelsea boss Maurizio Sarri, after he replaced Massimiliano Allegri last summer following his departure from Stamford Bridge.