Home Sport Howe: This is the hardest moment of my career 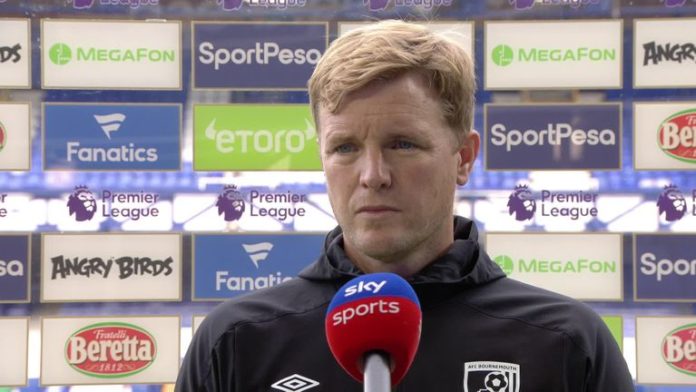 Dejected Bournemouth manager Eddie Howe admits relegation from the Premier League is the hardest moment of his career.

Goals from Josh King and Dominic Solanke – either side of Moise Kean’s equaliser – and a late effort from Junior Stanislas gave Howe’s side a 3-1 win at Everton.

However, while relegation rivals Watford lost at Arsenal, Aston Villa secured a 1-1 draw at West Ham which kept them up at the Cherries’ expense as their five-year stay in the top flight ended.

“In terms of feelings and emotions this has been the hardest moment of my career,” said Howe.

“I feel very emotional. Very disappointed, sad and dejected – loads of different things but they are difficult emotions to feel.

“I know the players are hurting. I saw the dressing room and they are all disappointed with what has happened, not necessarily today but during the season. It has not been good enough.

“I feel very sorry for our supporters tonight, especially as they have not been able to be with us.

“I’d like to say sorry from me that we haven’t been good enough this year and we haven’t been able to stay in the Premier League. As the manager I take full responsibility and that is my message to them.”

Howe would not, however, be drawn on his future in the wake of relegation.

“I am determined for Bournemouth to get there, back in the Premier League. In terms of the future and what it looks like, that is for another day,” he added.

“I think the next step for for me is to speak to the owner and the directors and see where we go from here. We need to have a strong vision of the future.”

There is a very different conversation Everton boss Carlo Ancelotti will be having with his board after an 11-match unbeaten home record came to an end with another disappointing performance.

After amassing 17 points in his first eight matches in charge, Everton have taken just 13 from the subsequent 12 matches as they slipped to their lowest league finish since they came 17th in the 2003-04 season.

“Disappointed with the result. We had less motivation than the opposing team, we didn’t start too well any way. It is not how we wanted to finish the season,” said the Italian. When I lose I am always disappointed. The real reason was our motivation.

“They had more motivation, they were fighting to get out of the relegation zone. They had control of the game, winning a lot of duels and second balls.

“In some parts of the game we were not so bad, we had some possession. We built up from the back quite good. The home record is gone. We did well this season at home I think but we can do better.”

Leighton Baines announced his retirement shortly after the final whistle, bringing an end to an illustrious career. The 35-year-old made 420 appearances for the Toffees, having joined from Wigan in 2007, and was capped by England 30 times, appearing at the 2014 World Cup in Brazil.

He was out of contract at the end of the season and, despite the club offering him the chance to extend it by 12 months, he has taken the decision to quit.

However, Ancelotti remains hopeful he can be persuaded to remain in some capacity.

“I am grateful to say thanks to him, I had only the last six months of his fantastic career and I found a fantastic player still,” said the Italian.

“I asked him to continue but he decided to stop. Everyone at the club has to be grateful to him.

“We have time to think about a new role. We would like to know what he would like to do in the future and the fact he can stay with us will be a good opportunity to use his knowledge and his experience and for him also his new future.

“He didn’t talk to me but he has some days to think about this.”

Analysis: Cherries had too much to do

“Bournemouth were excellent today. Howe said it was vital that his side made a bright start which is precisely what they did. They had a Callum Wilson chance that was saved by Jordan Pickford, but you could see early on that it was going to be very difficult to stop them today.

“I fancied them to get a result before the game as I don’t think there was any side more perfect as opponents for a team fighting to stave off relegation than Everton, and that showed throughout the 90 minutes.

“The performance against Man City recently would’ve given them the belief and certainly the way they performed today, you’re scratching your head with the position they find themselves in. They just left themselves with too much to do and they didn’t make a big enough impact when football restarted.”

The 2020/21 Premier League season kicks off on September 12, and will run until May 23. The EFL has confirmed the Championship season will commence on the same weekend, with their regular seasons ending on the weekend of May 8.

Premier League clubs have voted for the summer transfer window to open the day after the 2019/20 season ends – on Monday July 27 – and run for 10 weeks.