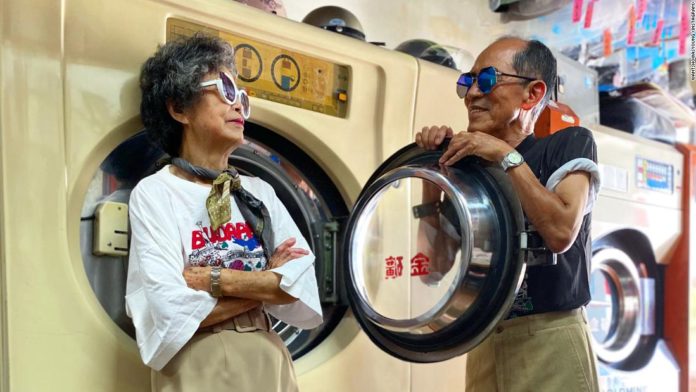 Two geriatric laundromat owners have become Taiwan’s latest viral sensation by posing for a series of photos wearing clothes left behind by their customers.

Having spent decades running a laundromat in the coastal city of Taichung, Hsu Sho-Er, 84, and her husband, Chang Wan Ji, 83, are now proving a hit on Instagram after their grandson — and stylist — set up an account for them in June. Any items left at the laundromat for over a year are considered fair game.

The couple pose in vintage-style garments, which they accessorize with hats and sunglasses. They also opted for more youthful looks — one image sees the pair sporting Adidas tops and bucket hats.

“It was my grandson’s idea,” explained Wan Ji, who said he has run the business for the best part of 70 years, over email.

“I don’t know if my reaction was positive at first,” he added, recalling that his initial response was: “Will anybody want to look at this?”

It seems that plenty of people do. Just a month after joining Instagram, the couple has picked up more than 130,000 followers. They expressed their gratitude for — and surprise at — the account’s popularity.

“I didn’t think people would like it,” said Wan Ji.

“Knowing that people still like me makes it feel like I have more grandsons and granddaughters,” Sho-Er added.

The grandson behind the project, Reef Chang, said he wanted people to know that age isn’t a barrier to having fun with fashion. He came up with the idea after seeing his grandparents bored at work.

The 31-year-old added that the outfits mark something of a departure from the pair’s usual style.

“Grandpa loves wearing a suit because he wants people to see that he washes and irons clothes properly” he said. “He thinks that if we are running a laundromat but look dirty, then no one will come in. He thinks it shows his professionalism, so he insists on wearing an ironed suit.

“When my grandma was young, she was a fashionable girl,” Chang added. “There are two wardrobes full of her old clothes, and the style is similar to that of the female stars of her generation. But now, she is more concerned that the clothes are comfortable.”

This story has been updated to correct the couple’s family names.