Home Sport England, Broad held up by rain in Manchester 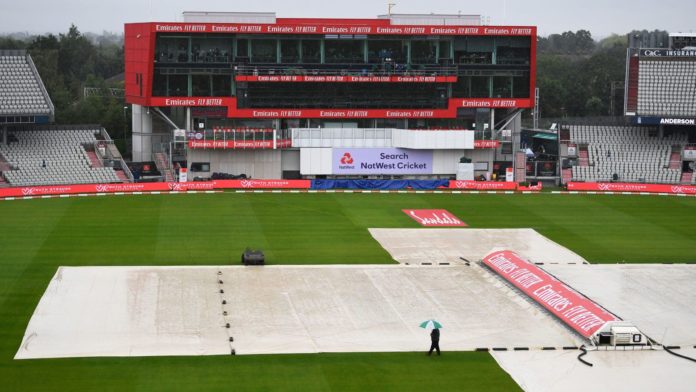 England’s push for a series-clinching win over West Indies and Stuart Broad’s pursuit of 500 Test wickets have been delayed by heavy rain in Manchester on day four of the third and deciding #raisethebat Test.

England are eight wickets from victory while Broad is on 499 in Tests after a dominant day three for the hosts left Windies, chasing a mammoth 399 to win the series themselves, reeling on 10-2 – Broad with the scalps of opener John Campbell (0) and nightwatchman Kemar Roach (4).

Monday’s play has yet to get under way at Emirates Old Trafford, although there could be a brighter window later in the day, while in a worst-case scenario England should have all of day five to try and force a 2-1 series win and regain the Wisden Trophy, with Tuesday’s forecast much brighter.

Joe Root was mindful of Monday’s poor outlook when he declared on Sunday with his side on 226-2 – Root’s sparkling 68 not out from 56 balls backing up Rory Burns’ 90 and Dom Sibley’s 56, with Burns and Sibley sharing the team’s first century opening stand at home since 2016.

Broad has been the star of the Test, though, taking six wickets in West Indies’ first innings of 197 – including four in four overs on Sunday morning – after smashing a rapid-fire 62 to lift England from 280-8 to 369 all out.

The seamer was left out of the first Test at The Ageas Bowl, which England lost by four wickets, and said at the time he was “frustrated, gutted and angry” at the decision after impressing in South Africa over the winter.

But he has been in devastating form since, taking 14 wickets at 10.50 in across the second Test in Manchester, which England won by 113 runs, and the ongoing third at the same venue.

Broad is now within touching distance of becoming the seventh bowler from any country to the landmark of 500 Test wickets and the fourth seamer, after England team-mate Jimmy Anderson, Australia’s Glenn McGrath and West Indies’ Courtney Walsh.

West Indies are current holders of the Wisden Trophy by dint of their 2-1 series win over England in the Caribbean in early 2019, another series in which Broad was controversially omitted from the first Test.

However, Jason Holder’s side will now require a superb rearguard action and possibly more rain in Manchester on Tuesday to keep hold of the silverware, while their hopes of a first Test series victory in England since 1988 now seem all-but over.