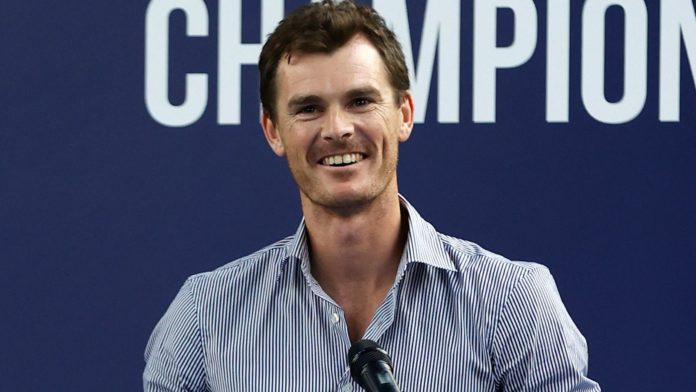 Judy Murray: “The US Open are trying so hard to cover all the bases and make everything as safe and doable as they can because they definitely need the event to go ahead”

Jamie Murray admits the 14-day quarantine rule is a “stumbling block” for players hoping to play at the US Open and tournaments in Europe straight after.

Players currently remain focused on the showpiece hard-court Grand Slam event at Flushing Meadows which is scheduled to start on August 31.

But after the Citi Open in Washington was cancelled last week, the US Open has now been put into question, especially with the recent rise of COVID-19 cases in New York.

“I don’t think the situation is particularly great,” doubles specialist Murray told Sky News’ Jacquie Beltrao. “I don’t think the Washington decision affects the US Open in any way really because it’s a different set-up.

“I know the US Open is desperate to go ahead and they’re trying to find the best solution for that to happen.”

Murray, who is taking part in the Battle of the Brits Team Tennis event next week at the Lawn Tennis Association’s National Tennis Centre in Roehampton, feels the major problem revolves around the time when players will be returning to Europe, hoping to play in Madrid and Rome before the start of the French Open on September 27.

“I’m kind of like everybody else and observing from afar and waiting to find out what the end result will be. If it goes ahead what’s that going to look like in terms of the event set-up itself but also there’s the quarantine issues as well when coming back into the EU (European Union) afterwards,” said Murray.

“If that’s enforced for everyone then that’s a 14-day quarantine so you obviously can’t play in the tournaments after. That’s probably the biggest stumbling block because if that happens then you’re asking the players to choose between going to the States – to play a Masters Series and Grand Slam – or staying in Europe and playing two Masters Series and a Grand Slam.”

It would be a massive blow for it (US Open) to be cancelled.

Mother Judy agreed with her son and said she would not be looking forward to jumping on a plane “anytime soon”.

“It’s a tough choice to be made,” she said. “There’s restrictions on travel, there’s quarantine issues, and every country has it’s own rules and regulations. The US Open are trying so hard to cover all the bases and make everything as safe and doable as they can because they definitely need the event to go ahead.

“The USTA (United States Tennis Association) relies on the profits made by the US Open for all the activities that it does throughout the rest of the year so it would be a massive blow for it to be cancelled.”

Asked whether she would be happy for Andy and Jamie to travel to New York, Judy replied: “I think they would make their own decisions but I’m not looking forward to jumping on a plane anytime soon.”

Jamie also reflected on Andy’s performance at the most recent Battle of the Brits tournament last month which was won by British No 1 Dan Evans.

“For Andy, the Battle of the Brits event was big for him in terms of it was an opportunity for him to get out on court and play matches and see where his level was at, see where his fitness was at ahead of preparing for the US Open,” he said.

“I think for him, he got a lot out of it. He got four competitive matches and this week is another opportunity for him again.”