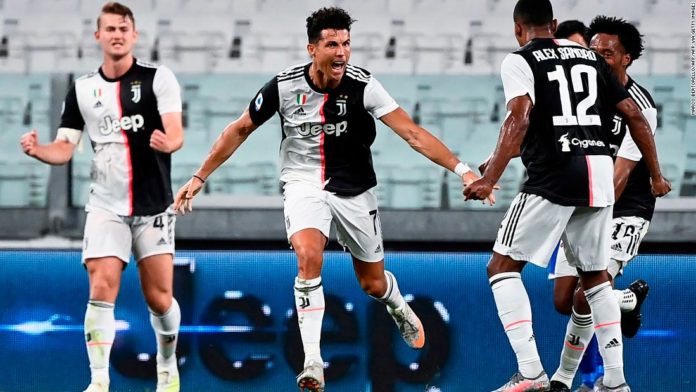 Ronaldo scored his 31st league goal of the season as Juventus won its ninth consecutive Serie A title with a 2-0 victory against Sampdoria.
It extends the club’s record streak in the Italian league with two games to spare despite holding a slim one-point lead when games were suspended amid the coronavirus.
Ronaldo, who has now won seven top-flight titles in his career, opened the scoring in Sunday’s game before Federico Bernardeschi prodded in a parried shot from the Portuguese forward to wrap up the Scudetto.
Visit CNN.com/sport for more news, videos and features
“This championship has a particular flavor, certainly a strong one,” said manager Maurizio Sarri.
“Winning is difficult, this team has been won for many years and therefore every year it becomes more difficult.
“It has been a tiring year, a very long season. We claimed top spot two days in advance (of the league being suspended) and it is thanks to this group, because continuing to find motivation after winning a lot, as I said, is not easy.”
READ: Man Utd and Chelsea seal Champions League spots
Juventus’ current run in Serie A, stretching back to 2012, is the best in all European leagues alongside Celtic in the Scottish Premier League and Ludogorets in Bulgaria’s Parva Liga.
Inter Milan’s 3-0 victory over Genoa on Saturday ensured the Bianconeri would need a win to prematurely wrap up the league and move clear of a competitive group of team’s including Atalanta and Lazio.
But Ronaldo eased any pressure on Juventus when he swiped a low shot past past Emil Audero having been teed up my Miralem Pjanic to break the deadlock against Sampdoria.
He also created his team’s second when Audero could only push his shot into the path of Bernardeschi, who netted his first Serie A goal since September 2018.
Ronaldo could have extended his tally for the season late on when he thundered a penalty into the crossbar, but he remains on 31 — three shy of Lazio’s Ciro Immobile who is chasing Gonzalo Higuan’s record of 36 goals in a season.
Serie A was the first of Europe’s major leagues to go behind closed doors and then to be suspended completely as the coronavirus started to sweep through Italy in March.
“We started a new path, with a new philosophy,” said veteran defender Leonardo Bonucci.
READ: Twenty years on after football’s most controversial transfer
“We continued to give everything we had in a complicated year off the pitch. It was a difficult time for everyone.
“We wanted it, we suffered and we brought out everything we had to satisfy us, the club, the fans, and those who greeted us in recent months and looked at us from above.
“An intense year, but we have confirmed to be a team made up of great men.”
After the league’s two remaining games, Juventus can turn attention to the Champions League and a last-16 clash against Lyon in August.