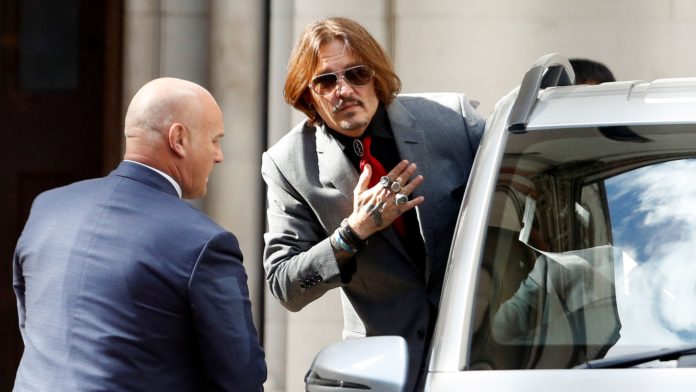 There is a “wealth of evidence” supporting Amber Heard’s allegations of domestic violence against Johnny Depp, lawyers have argued at the High Court – claiming the actor’s memory is “so severely impaired by drug use” he may not be aware of the extent of his “terrifying behaviour”.

Depp, 57, is suing the The Sun’s publisher News Group Newspapers (NGN) and its executive editor, Dan Wootton, over a 2018 article which labelled him a “wife beater”, and after three weeks the trial is now drawing to a close.

NGN’s legal team made their final speeches and submissions on Monday; lawyers for the Pirates Of The Caribbean star – who strenuously denies all allegations of violence – will get to do the same on Tuesday, with a ruling on the case expected to come at a later date.

Evidence suggests the 57-year-old actor is “a hopeless addict who repeatedly lost his self-control and all ability to restrain his anger” with Heard, the defence team claimed.

Sasha Wass QC, for NGN, told Mr Justice Nicol, the judge in the case, that evidence of Depp’s “drug and alcohol-fuelled lifestyle provides a backdrop to the events” in question.

“Firstly, it demonstrates that the claimant was subject to irrational mood swings and abnormal behavioural patterns, which would not have been present when Mr Depp was clean and sober, and Mr Depp has a name for this metamorphosed entity, namely ‘the monster’,” she said.

“The other aspect which is important in terms of substance abuse is Mr Depp’s recollection of his own disgraceful conduct, which is so severely impaired by drug misuse that he may not even have been aware of the extent of his violence and terrifying behaviour which, on more than one of these pleaded incidents, put Ms Heard in fear of her life.”

Ms Wass told the court it would be “trite” to suggest that a person who remains with a violent partner “cannot be a victim” and said that “the days are long past when the courts in this country required corroboration before accepting the unsupported testimony of a female complainant”.

Testimony from a person who makes a complaint of domestic violence is “sufficient to prove the case”, the barrister said, “provided that the complainant – Ms Heard in this case – gives credible and reliable evidence”.

In this particular case, there is a “wealth of evidence” – including text messages and emails as well as medical evidence – supporting 34-year-old Heard’s claims, Ms Wass argued.

During the three-week trial, the court has heard evidence from both Depp and Heard, as well as other witnesses including her sister, Whitney Henriquez, and some of her friends, as well as members of Depp’s staff past and present.

NGN is defending its article as true, “namely that Mr Depp did indeed beat his wife”, the barrister told the court.

It is relying on 14 allegations made by Heard, who appeared as a witness for the publishers, all of which the actor denies.

“For the defence of truth to be substantiated, the defendants need to prove on a balance of probabilities that Mr Depp assaulted Ms Heard on at least one occasion,” Ms Wass said.

“During the last two weeks, the defendants have established that many more than one incident of wife-beating took place over the course of the relationship between the claimant and Amber Heard.”

Ms Wass went through details of the allegations again in court on Monday, including what Heard has described as a “three-day hostage situation” in Australia in 2015, the so-called “Boston plane incident”, and her 30th birthday party in April 2016.

Heard has accused Depp of verbal and physical abuse from early in 2013 until their break-up in May 2016, including screaming, swearing, punching, slapping, kicking, headbutting and choking her, as well as “extremely controlling and intimidating behaviour”. She claims he threatened to kill her “many times” and that she was “terrified” of “the monster” he would sometimes become.

She claims “one of the worst and most violent nights” of their relationship took place in December 2015, when she says Depp attacked her the day before she was due to record an appearance on James Corden’s The Late Late Show.

During the trial, the court heard evidence from a stylist who worked with Heard for the show, who said she saw no injures, and also a make-up artist who said she did, and had to cover them up.

Depp claims she has made all the allegations up, accusing his ex-wife of “building a dossier very early on” in their relationship to align herself with the #MeToo movement.

He told the court no other woman had ever accused him of hitting them, and witness statements submitted by two of his ex-partners, Winona Ryder and Vanessa Paradis, supported this.

Other famous names to be drawn into case include actors Leonardo DiCaprio and James Franco, and Space X and Tesla founder Elon Musk, with Heard saying Depp was jealous and accused her of having affairs.

Depp called DiCaprio, who she auditioned with once, “pumpkin head”, Heard said in her witness statement.

The court also heard details of messages exchanged between Depp and actor Paul Bettany and of his friendships with other stars including musician Marilyn Manson and The Rolling Stones guitarist Keith Richards.

In her closing speech, Ms Wass said Depp had “aspiration to be the Southern gentleman with the beautiful younger wife”.

She said he glamorised drug use and that “there was a clash of generations and a clash of cultures” when he got together with Heard. “He was not expecting her to continue acting with younger attractive co-stars,” the barrister said.

Ms Wass concluded by saying that Depp has “done what he wants for most of his adult life” and was not about to change for Heard, and told the court she believes the actor to be “a wife beater” – the crux of this libel case.

The trial has been the biggest English libel case of the 21st Century – but even once a judgment is made, it does not end here.

Depp is also suing Heard in separate libel proceedings in the US over a December 2018 column in the Washington Post, which did not mention the actor by name but said the actress received “the full force of our culture’s wrath for women who speak out”.

That case is due to be heard in Virginia next year.